New districts, not like the old.
Redistricting by judge, part 1

By PP - August 20, 2005
Big AP story today, Federal Judge Karen Schreier announced her redistricting plan, based on her decision in the ACLU Lawsuit. Apparently, the associated press doesn't know how to make maps for us visually oriented people, so I did a couple quick and dirty ones. 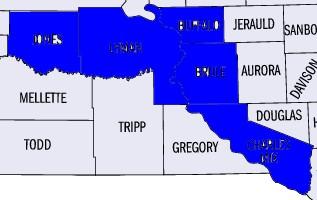 The NEW district 21 as compared to the old gives up Gregory county and exchanges it for Lyman and Jones counties. (Sorry for the dark color obfuscating the text, I said they were quick and dirty). 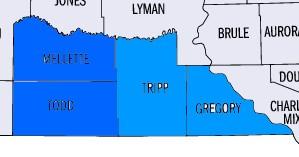 District 26 uses the favorite trick of the courts in situations like this, and splits 26 into two separate house districts, 26a, and 26b. District 26 is really re-engineered, going from Haakon, Part of Bennett, Jackson, Jones, Mellette, Lyman, & Tripp counties to Mellette, Todd, Tripp and Gregory Counties. 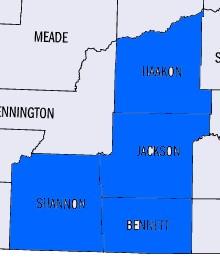 Now, before we get ahead of ourselves, let's not consider this done as of yet, as stated in the AP article:

The high court in June ruled that the Legislature does have authority to redraw district boundaries after a court decision, but the Legislature's Executive Board then voted not to submit a new redistricting plan.

Legislative leaders said they stood by the plan they passed in 2001 and wanted to ask a federal appeals court to overrule Schreier.

Long said state lawyers on Friday were trying to determine whether Schreier's redistricting plan would have to be submitted to the U.S. Justice Department for clearance. Judges have ruled that any change in state election laws that effect the Rosebud and Pine Ridge reservations must be pre-cleared by the Justice Department.

(I really recommend you read it all here).

Aside from the fact that this isn't over, and will go to appeal before anyone can say it's done, just so you know, I'm calling this part 1, because I haven't had a moment to put pen to paper, and see how this is going to affect the legislators currently sitting in those seats. I'll get to that this weekend, and we'll have part 2 - that's where this could really get interesting

All I could think about when reading the paper this morning is, "How do they not have maps? Maps are THE issue here!"

Douglas said…
Yup, the papers are apparently graphics-challenged..and to think Blind Orange Julius is right there in Rapid City ready to whip out graphics.

I was going to dink around with maps since that ruling hits right here where I am, but think I will be lazy and link to your site when I get around to loquacious profundity.. or verbose BS..depending on one's perspective.

All SD House of Rep districts should be single-member; but a unicameral legislature with single-member district makes even more sense.

I would not be totally surprised if resistance to the judge's decision and the stirring of district lines and mixing of incumbents, etc. even led to zero Native Americans being elected.

The redistricting done by the Republican legislature in past years was most likely not done to keep Native Americans out of the legislature, but more to make sure no Democrats had much of a chance.

Several of the GOP redistricting schemes have had long straight lines for borders and then jogged a mile for a mile or two to "move an incumbent Democrat into a largely GOP district.

Redistricting should be done by a computer with no data included for residence of any incumbents of any party.

I still have not heard any comments on this from local politicos around here. Guess I will have to do a little telephoning this evening.

Thanks for the quick and dirty maps.
2:38 PM