Showing posts from December 4, 2005
Show all

By PP - December 08, 2005
I caught the story on the news last night that a wish recently granted by the make-a-wish foundation has caused the soon-to-be canceled series "Alias" to use the name of a South Dakota girl who visited the set in a character. From Todd Epp's and my brother's old employer KSFY:
Wednesday night's Alias episode on KSFY had South Dakota ties. The Alias character Rachael used the alias name Lydia Sand in the show. That's also the name of one of the show's biggest fans. 14-year old Sioux Falls teen Lydia Sand got to meet Jennifer Garner and the cast last month. The writers told her they liked her name and would use it in one of their episodes. Listen to how she got to see the set.

For the past five years, Lydia Sand has known she has the life-threatening disease cystic fibrosis. "This is my vest and it goes around me and it inflates with air and it shakes me for about half an hour, I do that twice a day to get the mucus out of my lungs and then I take about …
Post a Comment
Read more

Quotes of the Day - Budgetary Style

By PP - December 07, 2005
Quotes of the Day on the South Dakota Budget - All from the Rapid City Journal:
“It’s a fairly lean budget”
-Senate Appropriations Committee Chairman Jerry Apa

“There are no great revelations in this budget, and I’ve seen 16 of them.”
- Senate Minority Leader Garry Moore

“The deficit reduction is very much on schedule.”
- House Majority Leader Larry Rhoden

Much ado about Alice 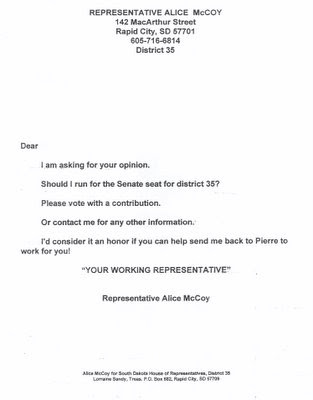 Representative Alice McCoy has been a busy little legislator lately. Did you notice her letter to the editor in the Rapid City Journal this AM?
Letters to the editor, 12-6

I need to thank the Department of Transportation for doing the best they can do for Lord of Life Lutheran Church and the residents of Copperfield. We are very pleased with how the entrance turned out. Sometimes just communicating with each other and working out an understanding of each other's issues is the right thing to do.

ALICE MCCOYIs it just me, or am I just too cynical? Because I'm taking the statement "Sometimes just communicating with each other and working out an understanding of each other's issues is the right thing to do" as an overt campaign speech, in which she's trying to differentiate herself from her anticipated opponent, Senator Bill Napoli.

As you know, Bill is apt to... How shall we say it? He's apt to call something a…
4 comments
Read more

By PP - December 06, 2005
Under a previous post, under comments, there had been a little discussion where Maka Duta’s name was invoked by Jack, one of the SDWC readers (I think in response to a prior post I did invoking her name). This was back on 11/1.

Well, today I was checking comments, and what should appear in my comment box, but a reply to that comment from the lady herself, Becky Red Earth Villeda, a.k.a., Maka Duta.

Maka Duta disagreed with a few of the characterizations, and in the interest of fairness, I wanted to give her the opportunity to speak her piece. From the comments without changing one word, Maka Duta:
People!

Everyone wants to be so intelligent and knowledgable of all subject matters and yet noone (As far as I can see) has bothered to check the "FACTS" of the matter where I am concerned. First, the case was dismissed because as the SD Attorney general (Mark Barnett) stated in court "Your Honor, the Handwriting Expert witness said they were signed by the plaintiffs and not Maka …
1 comment
Read more

Achilles and the fickle electorate

By PP - December 06, 2005
I wanted to do a post on electoral invincibility, because I think it's a myth. I hear people say things like "Stephanie Herseth can't be beat" or a few years before that "There's no Republican that can beat Tom Daschle." And I hear it said about people on my side of the aisle too.

And I disagree. I refuse to accept it. My brain is wired in a way that I am unable to allow the concept of candidate invincibility to exist in my reality.

These circumstances didn't exist - they had to be created.

Ya want it off the top,or the bottom?
The long cold winter and initiated measure to change the school start date

By PP - December 05, 2005
Anyone catch the articles in the Mitchell newspaper or the Argus this weekend? I think they provide the best argument why the initiated measure to change the school start date might be in for a rocky time this election. As found in the Mitchell Daily Republic:
... a “legislative fix” might be necessary to reduce the number of required instructional hours if school snow days become too numerous this winter.

But Mitchell Superintendent of Schools Joe Graves says schools have an obligation to teach students and called the concern a “tempest in a teapot.”

“We want those days,” he said. “Students need those days. We’ll just make them up later. A day of school is not a liability, it’s an asset.”

Mitchell lost three school days this week to inclement weather. The district had classes on Wednesday and Friday. Graves said time will be made up by ending the school year on Tuesday, May 23, instead of May 18, a Thursday.
Patronize this excellent paper, and read it all here.

At a time when schools are t…
1 comment
Read more

The Appropriations committee is meeting today and tomorrow in preparation of session and the Governor’s budget address. Speaking from the senate side, Senator Brock Greenfield of Clark reported to me today that "Appropriations heard an overview of the UJS's proposed budget increases, and Tad Perry was reporting on behalf of the Board of Regents on the Governor's 2010 initiative.

Today, we will also we hear from the Dept. of Ag about the State Fair.

The real value to these two days begins later today, when we begin preparing for the upcoming Session....establishing a list of questions we will ask of all the departments, as well as questions we will ask of the individual departments & bureaus." And speaking of the budget address, all of the legislators will be in town tomorrow for the Governor’s Budget address. KGFX radio is reporting that the state’s structural deficit is the big topic among legislators in my home district (Dist 24). Senator Gra…
1 comment
Read more
More posts