By PP - September 03, 2005
Yup. More information on the proposed bylaw change from the South Dakota GOP. I've started writing e-mails and making calls to party leadership to plead my case. Hopefully, it might work.

I dont' recall that the GOP has ever been stronger. We hold all but 1 constitutional office. We kicked the Senate minority leader out of office. We hold massive majorities in either house of the legislature. Yet there's a few who want to go back to the "good old days."

I might be paying way too much attention to this issue, but its for good reason. It might abuse me. It might toss me aside. It likes to chew me up, and spit me out like used gum. But, I have invested so much time and energy and myself into working with candidates of the State GOP, I can't help myself. The party's well being matters to me. I care about the South Dakota GOP. Maybe I shouldn't, but I do.

I believe that the party, in bringing new people into the process by having them be convention delegates as precinct committeemen and women, is incredibly strong. It's end up being this melding of institutional knowledge, dynamic personalities, and the boundless energy and optimism of youth.

But for some reason, there are people who long for the days of arm twisting, and backroom deals. And the worst part is that they don't get it. I think their memory is fading, because I don't know when it's ever been this good. So what are the cold hard facts on this proposal? Just a few quick facts:
I believe this measure is unbelievably bad. The only purpose it serves is to make the process more closed, and to shut good workers out in favor of centralizing authority with just a few.

Again, please read the other posts regarding this measure below. And get ahold of the state GOP at 224-7347, or e-mail the chair at Randy@southdakotagop.com . Better yet, call your county GOP Chairman. And don't let the people who want to turn the turn back the clock of progress win! 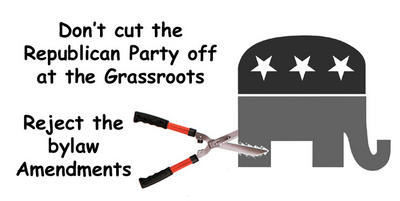