A new twist on the campaign finance shuffle. This one is clever, but I think I've ferreted it out.

By PP - November 15, 2006
Dang, this one is clever… Here’s a twist in campaign finance that I haven’t run across before.

Not familiar with them? In 2002, they sent out postcards, and conducted polling, printing the results as they saw fit in huge full color full page ads. In 2004 they ran ads for Daschle, and against Thune. At one point Daschle publicized a letter to them asking them to stop the negative ads in his race. 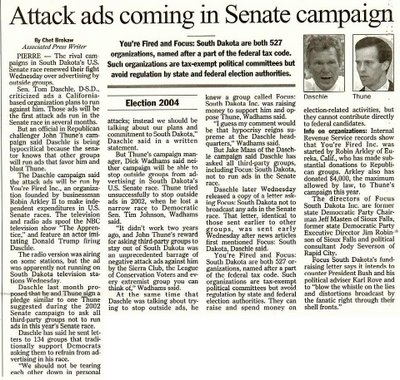 This year? They’ve once again been in the thick of the Democratic Campaign apparatus.

Getting back to the twist in campaign finance I mentioned, it looks like Focus South Dakota did something I hadn’t contemplated as possible, given the taboo (and legality) of corporate money in legislative races. But through dividing their organization into two separate entities, they managed to leverage the use of corporate donations for a huge benefit to three state legislative candidates.

And it looks to be 100% legal. So how did they manage this trick?

Your first mistake would be to consider it a direct donation. The laws won’t let you do that. What we found out this year on a couple of the ballot issues was that you CAN take corporate donations for the promotion of ballot measures.

According to the Secretary of State records, the Focus South Dakota (527 corp) group took over $25,000 from Stan Adelstein’s Northwest Engineering Corporation for the purposes of opposing HB 1215. Others donated lesser amounts, including a couple corporations, and Tom Daschle who kicked in $500.

Where did all of this loot end up? Various places, but the purpose of all these corporate donations was clearly for the voter contact lists, with over $35,000 for the management and maintenance of the list. 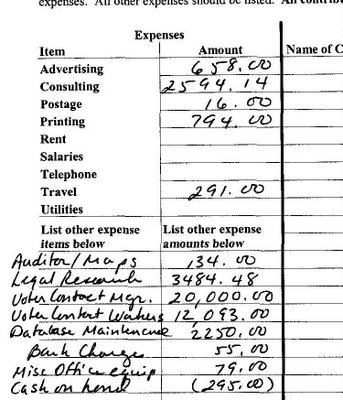 It must have had some value, because the PAC counted $15,000 in income from Democratic legislative candidates Dennis Finch, Theresa Spry, and Stan’s man Tom Katus for the purchase of this list.

Moving on, Focus South Dakota also has a related political action committee which is filed as a regular PAC. Whereas the Focus 527 PAC took $25,000 from Stan’s corporation, the regular PAC took just under $31,500 from him personally.

Remember that part where I told you to remember that $15,000 total paid by Katus, Finch, and Spry for the Focus 527 PAC voter list? Curiously, there’s another PAC out there with a corresponding donation which appears to be related to all of this.

The Nix on Six PAC was fronted by Don Frankenfeld and surprise, surprise, solely funded by Stan Adelstein. The amount Stan put into it? $15,000. 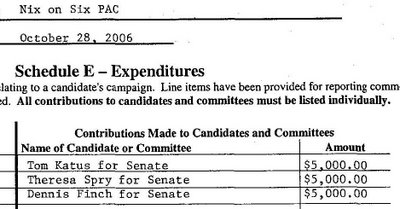 Funny how the total amount of $15,000 corresponds exactly to the amount these candidates are reporting as having paid in total for the lists from Focus South Dakota’s 527 corp.

So, at this point we have $15,000 from Adelstein to these candidates which ended back in Focus's 527, the $25,000 of Stan's corporate money which mainly went to list management, (at two weeks out) the only purchaser being the three candidates, and with the regular focus PAC, he kicked in around 31, 400. That puts the total that Stan put into these three PACS for the apparent benefit of these Democratic candidates at over $70,000.

And I'm ultimately left with the question - how much went to fight 1215?

Now, I will absolutely acknowledge that Focus South Dakota clearly created and ran at least a couple of ads regarding the abortion issue. That's unequivocal.

It hardly seems sufficient to pay an actor and do production on the above ad. And even so, the lion's share of the corporate money ($25,000) kicked in by Stan's corporation seems to have been for list management with the only stated recipients being the 3 legislative candidates.

Am I off base in reaching that conclusion? Possibly. But I'm not convinced.

Well, for starters, show me who else benefited? On either of their pre-primary reports, I don't see any list management expenses being charged off as an in-kind donation to the campaign for Healthy Families or a purchase on their part from Focus South Dakota. And these reports are supposed to be complete within two weeks before the election.

We still have some time before the year end reports come in to complete the tale. But in the meantime, there's some gristle for people to chew on.
Adelstein

Anonymous said…
just watch, the liberal media hacks will ignore all of Adelstein's shenanigans once again and look the other way because he is Daschle's buddy but they will fry Roger Hunt
1:42 PM

Anonymous said…
Prediction: there's no way Heidepriem and the Senate Democrats are going to shut off the Adelstein money spigot....they will kill campaign finance reporting reform...just as they will kill any investigation into Dan Sutton...their only purpose in Pierre is to line the pockets of teachers' unions
1:43 PM

Anonymous said…
did you ever notice that it's the same small cabal of liberal/Daschle hacks who are behind almost everything: Adelstein, Daschle, Severson, Hildebrand, Fleming, Heidepriem, Billion, Schuldt...
1:48 PM

Don't worry aobut Hunt. Larry Long will never touch him. It's the 11th Commandment, a rule you ought to follow. Stan's a great man who will write you some fat checks if you run as a Republican who doesn't have his head where the sun don't shine.
2:03 PM

Anonymous said…
It's especially interesting when you consider who decided to put HB 1215 on the ballot in the first place. It wasn't Planned Parenthood...It wasn't NARAL...
2:23 PM

Not to rain on your parade or anything, but my main campaign in South Dakota this year as No on 7 (keep video lottery- which we won by 12 points), not No on 6.

Not that I would have turned down the business, I was simply not invited to participate professionally.

Anonymous said…
PP, I'm curious as to what your position is on Campaign Finance Reform. Do you think the laws need to be tougher?
3:15 PM

Anonymous said…
This is the problem with campaign finance laws in South Dakota and the country. Why not pass a law that says you can give as much as you want but there is immediate disclosure. No more PAC's, no more 527's. Just disclose everything and let the people figure it out.
3:16 PM

Anonymous said…
Scott Heidepriem will not shot off campaign finance reform or the Sutton investigation - because he is the MINORITY LEADER. Scott may be an interesting guy, and his party may have made gains, but they are the MINORITY PARTY. Scott WILL NOT be dictating the agenda.
3:28 PM

You're not supposed to hear about me, just my clients.

As to hiring me, it depends on what the job is.

Some of us "hacks" are kind of picky, you know?

Anonymous said…
If you want to know who Fleming is, check the lefties at Mt. Blogmore. He is among them, along with Frankenfeld, who says he is a Republican but you would never know it by his clients. But hey, business is business. As an unabashed capitalist, I understand it.
4:00 PM

Anonymous said…
And if you want to know what we do, you would go here:

regarding your 3:15 post regarding "whether I think the laws need to be tougher..." We have campaign finance laws now? I thought they were more rough suggestions.

Seriously, yes. The last two cycles have been horrendous. Money gets shuffled in an unfettered manner between PACS, and if a report is screwed up (accidentally or on purpose) it's no more than an "oops."

I'd like to at least place some moderation on using PACS as a vehicle to avoid campaign finance limits, by possibly limiting the amount individuals can contribute.

I would think a $5-10,000 aggregate yearly total limit for State PACS per person is entirely reasonable, as it isn't likely to limit the activities of the common man, but it will keep single individuals from buying elections.

I think reporting should be earlier and with no loopholes for associations and corporation.

I'd also like to see another reporting interval in there during election years. Such as adding the first of October to the one 2 weeks out and end of year.

I'd also like to see a 24 hour notice to the Secretary of State whenever funds are transferred between PACS.

Now, these aren't tough guidelines. In fact, they're pretty darn loose with high limits. But I would agree (to a point) with one commenter who thinks it should be more about reporting than limits.

Raise the ceiling where it exists, and install a high one where it doesn't. But most importantly, make sure it's nice and bright so you can see what's going on.
6:16 PM

Bill Fleming said…
Thanks PP. As you state, that's plenty "to chew on."

Transparancy is key as you seem to intuit, although
you do not seem quite yet prepared to yield it.

Anonymous said…
Stan blew some cabbage to fund his nefarious political agenda, in his usual, campaign finance ways. People like him will always be looking for ways to bend the rules to their advantage. But, how far did it go toward producing "the world according to stan?"

Well, two of the three stooges lost. The one that did manage to win was in his old district. So, what did he do for the voters of district 32? He got them to vote themselves right into the minority.

Anonymous said…
I don't like Adelstein but I also don't care how much money he gives to candidates. I just care that he is giving it. That way I know that if he is supporting them, I probably won't. BUT, there should be no limits to contributions.
11:49 AM

Anonymous said…
It's pretty obvious that a crime was committed here, corporate donations that legally could go only to a ballot issue ended up benefitting three Senate candidates. Also, the advertising amount couldn't possibly be correct. It would take more than $658 to make that ad, plus a lot more to run it on TV several times.Also,did we ever figure out all the crooked numbers in the PACS that Jim Endres was trying to manage?
12:14 AM