By PP - November 16, 2006
The Rapid City Journal is reporting today that the Special Session has officially been canceled:

Gov. Mike Rounds did the expected on Wednesday, canceling a special session of the South Dakota Senate that he had previously called to investigate allegations of improper sexual contact by Sen. Dan Sutton of Flandreau.

But the newly elected Senate could still investigate the allegations during the 2007 legislative session that opens in January. And regardless of whether senators decide the Sutton issue, the newly-elected Democratic leader in the Senate said Wednesday that he will press for a code of ethics for that body.

“My main concern right now is that I don’t know that the Senate has in place a real code of ethics,” Sen.-elect Scott Heidepriem of Sioux Falls said. “And I think it’s very important to address that, regardless of what happens with any other individual matter.”

Read it all here.

And I can't tell you how much that the Democrats commenting in this matter have no idea how much they DON'T want to deal with it this next session. Why? 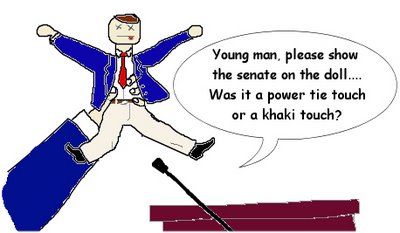 Because while the questions in the open session won't be of the it won't be exact nature as the editorial cartoon I drew above - it will be ugly. The discussion will be lurid. The nature of the debate will be scandalous. And this will all be at the same time they're trying to pass laws.

But, that's the path that Senator Sutton has set them on. Good luck. You're going to need it.

Anonymous said…
I do like the picture, but the Democrats and the whole senate should want to see this through, it will be rough, but even men like Senator Sutton and Mr. Wiese's son, probably want this all the way through with and done.

I'm sure it hasn't been great on either of them, but we should at least give Senator Sutton the benifit of doubt and let him be innocent until proven guilty, and not the otherway around. It doesn't matter which side of the fence you are on, or whether you know the individuals personally. Now I have the ability for both, so I know where my position and loyalties lie. But all I can preach is that both of these men and their legal councils, and hopefully the state of SD want's to get this over and done with in a timely and legal fashion.

All I know is that when this is over, I know who will be standing and I know how much of a relief that it will be for that camp.

Anonymous said…
When is the attorney general going to conclude his investigation? For God's sake, murder investigations don't take this (Larry) long.

The AG is either completely incompetent, or completely malfeasant. If he can't get the job done, Long should resign.
1:41 PM

Anonymous said…
it will be fun watching Heidepriem "welcome" his new colleague Senator Sutton to the session...
1:47 PM

Anonymous said…
Of course this will turn out bad for the Dems. Just like everything else in PP's little fantasy world. Just like the election, right?
2:08 PM

Anonymous said…
This is how Mike Rounds currently operates:

Anonymous said…
I think you've mistaken the Democrats as the majority party. You know, the ones who have the most legislators so that they can control the process.

You know, process. It's the thing you avoid when you make up your own rules.

Or as Representative Jerome Lammers from Madison would say, "You can do anything you want, just as long as you've got the votes."

If anybody's going to have a hard time, it will be those guys who've got the votes. Democrats can only watch. So, you go do that voodoo that you do so well!
3:01 PM

Anonymous said…
If the AG hasn't came forward with information or decision I would think there must be something that needs investigated/attention and sometimes that can take awhile. I figure he has a case load a mile high anyway.
4:50 PM

Anonymous said…
I always liked Sen. Sutton, as far as Dems go, he was friendly, fairly conservative and pro-life. I don't like the fact that he had to hire a lawyer and then resign when he had said he wouldn't. It makes him look guilty.
5:07 PM

Anonymous said…
From what I understand, if Larry Long does not bring charges, then that is all that happens. The investigation or case file is never closed, they never give us the information that they have or anything. Am I correct that the investigation is never concluded unless they bring charges? If so, that sucks for Sutton because he will never be able to clear his name.
10:22 PM

Anonymous said…
What happens is that the AG either brings charges or announces that he will not be bringing charges. We're all waiting. What's it going to be?
9:05 AM

Anonymous said…
Question: has the Ag's office already turned over the information that was asked for?
8:14 PM

No. It's even dumber than divisive social issues. The Attorney General has run an investigation since last winter and has produced no indictments and has said nothing other than an investigation was conducted.

What can the state senators act upon? The kid's word versus Danny's word. Then what?

Other than airing dirty laundry, which has been airing since Scheenbeck unleashed it for the bluntly obvious purpose of turning the voters against Danny, this trick has backfired. It will backfire again unless:

* Larry Long files charges or weighs in with more than hearsay. If he's got it, where is it?

* Another individual(s) come forward with similar stories. I can understand why a victim would be reluctant to have their name and reputation trashed in blogs.

* Danny confesses. And why would he do that without further evidence?

If this was a sexual harrassment case in the private sector workplace and an employer had to act on he said/he said evidence with absolutely no witnesses or tangible evidence, what would be the outcome?

This is the context which this issue is being discussed outside the silly, excitable and juvenile context of a partisan blog site designed for gossip and fun. Think it through logically. Maybe it is inappropriate for these harrangues to continue on blogs. Now let's move on. It's beating a dead horse until the session starts.
10:14 AM

Anonymous said…
The doll in this post is a young republican voodoo doll (evidenced by the blue blazer and cookie-cutter appearance). The more the republicans poke that doll and this issue, the more painful it will be for republicans.
1:27 PM

Anonymous said…
I don't think Sutton was beating a horse!

I will never figure out you Liberals, if this was a Conservative, you would want the hanging in the town square. Grow some balls, have the hearing and if he is guilty, throw him out!
8:33 PM

Anonymous said…
What really might come up are the juicy stories about all of the "no sex" candidates. They are the ones that should fear this What
about Lee "the Ladies Man" Shoenbeck accused of unwanted advances toward a fellow legislators wife? How long has Leadership covered this up? Are there others to look into? This may be a can the Legislature does not want to open...

And don't give me this was a long time ago. I seem to remember Clinton saying something similiar and you Republicans just "blew" it off.

I think the problem is Liberals are not as worried about sex scandles like you Conservatives.