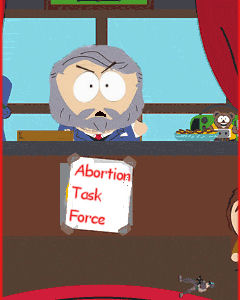 If any of you are affecianadoes of "South Park," you're certainly familiar with the whimsical antics of Eric Cartman. Eric, arguably the focus of the show's wicked sense of black humor, when provoked with something he doesn't want to deal with because he's on the losing end of things is prone to annnounce "Screw you guys, I'm outta here."

This was similar to the outburst from Senator Stan Adelstein and several other members of the State Task Force to Study Abortion. Those members had only won a few concessions from the majority of members on the master document to be presented as the final report.

And then, they decided to take their toys and go home. Click here for the actual sound bite.

No matter what side of the argument your beliefs lay on, you have to admit the tantrum is a bit much for an elected official.

Anonymous said…
I’m more surprised anybody on the choice side bothered to show up. As soon as the committee was announced it was evident that the report was going to be slanted to the pro-life side no matter what the testimony was. They could have saved the taxpayers a ton of money and just written the report without having any meetings.
I’m curious PP, why no comment on this site when the pro-life people changed the rules (that they suggested and voted for) to allow out of state people testify at a meeting that had been set aside for South Dakotans? I believe it was Senator Greenfield who thought it was so important to hear what our “friends and neighbors” had to say….until the meeting and all the South Dakotans who were there were on the other side. I think there was plenty of Cartman to go around.
1:36 PM

Anonymous said…
Ben, you must be a democrat. The only time democrats are concerned about spending taxpayers' money is when abortion on demand is challenged, when the death penalty is implemented, or when the military defends our country.
12:56 AM

Anonymous said…
Amen, anonymous! The Democrats have turned into the Party that supports gays, lesbians, abortionists, environmental wackos, ex-patriots who hate America, and the Party who wants to take away your right to bear arms. Keep fighting the good fight!
10:15 AM

Anonymous said…
Did any of you anons read the comment of the Pierre, pro-life, physician on the committee??? "abortion on demand is challenged, when the death penalty is implemented, or when the military defends our country" when did God become so morally flexible...it's enough to make this protestant go catholic for a little consistency and lack of venom. The committee was a sham, even a disinterested person can see that, Roger Hunt as the mouthpiece coming out, paraphrasing "where have you gone honest discourse, disagreement and process?" Give me a break.
10:40 AM

Anonymous said…
...and beside, let's get back to the really important issues at hand, like laptops!
10:41 AM

Anonymous said…
PP-
I agree with Ben. Dr. Seuss has more credibility on this issue then "Dr. Unruh". How does chiropractic school give you credibility to discuss reproductive health issues?

Also, PP, isn't your party the one who shut down the entire US Congress because you didn't like the way you were being treated?
11:41 AM