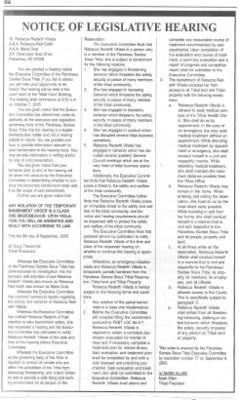 Just a couple of quick excerpts:

You are granted a hearing before the Executive Committee of the Flandreau Santee Sioux Tribe. If you fail to attend you will miss your opportunity to be heard. The hearing will be held in the court room at the Tribal Court Building. The hearing shall commence at 9:00 AM on October 7, 2005.

It goes on at length, but basically it looks like a lot of alleged disorderly conduct type stuff got Maka Duta in dutch with the Flandreau Sioux Tribe. Basically, they’re pretty mad at her, since I don’t recall I’ve ever heard much about banishments in South Dakota, period.

Why does that name ring a bell, you might ask? Well, a couple of years ago, she was pretty famous. From the 10/16/2002 Wall Street Journal:

Maka Duta, who worked for the Democratic Party collecting registrations in Ziebach, bought a county history book that contains many local names. Some are turning up in the pile of new registrations. At least nine absentee ballot requests have been returned by the post office. Mable Romero says she received a registration card for her three-year-old granddaughter, Ashley.

Maka Duta, a contract employee of the South Dakota Democratic Party, had been paid a per-voter fee for gathering registrations.

The Democratic Party fired her after problems surfaced in Dewey and Ziebach counties. Attorney General Mark Barnett is investigating those reports. Irregularities not linked to Maka Duta are being investigated by officials in several other counties. The problems are of particular concern because South Dakota’s intense races for the U.S. House and Senate remain too close to call.

At the time this notice was made on September 9th, there was an emergency partial banishment. Maybe Epp or another attorney can enlighten me on all of this, because aside from the fact it sounds fairly tragic for the people involved, it is interesting stuff.

It’s like the Amish shunning one of their community members in the movies or on the episode of MacGyver, where all the residents turn away from the person who had violated the Amish code.

In doing some light research, I guess tribal banishment is not entirely unheard of on a national basis. I note that some tribes have done it for the commission of brutal crimes. And others have done it because of violation of traditions.

And in researching it, apparently it isn’t as entirely unheard of in South Dakota as I might have thought.

But as I said, it’s not something that ever noticeably bubbles to the surface of South Dakota discussion circles very much. But thanks to someone whose name has been etched in the annals of electoral infamy in South Dakota, we might be hearing more about it.

Silas said…
The tribes, if the treaties giving them sovereignty are to be taken seriously, have their own methods of discipline.

And did the Argus Leader really confuse a preposition with an adverb?

Todd D. Epp said…
PP makes news and sends the RCJ on the trail! Congratulations on a finding an interesting story.
5:27 PM