Just a few notes on happenings of the day...

Yesterday, the Pierre Chamber of Commerce sent out a notice of the first local Crackerbarrel:

Legislative Cracker Barrel
On Saturday, January 7th, 2006, our 3 local legislators (State Senator Bob Gray, State Representative Tim Rounds, and State Representative Ryan Olson) will be offering a Cracker Barrel for the public at the Pierre Area Chamber of Commerce Community Room from 9:30am to 10:30am. The format will be one where each legislator will have a brief time for comments, after which a question and answer session will follow. What a wonderful opportunity to speak candidly and openly about issues facing our legislators' right before session begins. The public is welcome. Cookies and coffee will be served.

I might have to stick around for that one, and get some video coverage. And Pierre Chamber, if you want better attendance, use the suggestion from South Park's Eric Cartman:

So think "Punch and Pie."

Also from the Pierre Chamber of Commerce, add the following to your "To Do" list:

Legislative Welcome
The Pierre Chamber of Commerce is hosting the Legislative Welcome on Tuesday, January 10th at 6:00 p.m. at the Ramkota River Centre. If you would like to sponsor a Legislator and their guest, call the Chamber at 224-7361 to host your favorite Legislator. Cost is $30.00 per ticket, and will include social hour, dinner and entertainment.

(But what if you don't have a favorite?) With my luck, I'd be paired with Gordon Howie, Clarence Kooistra, or Alice McCoy - a few GOP legislators I've given a hard time to lately. 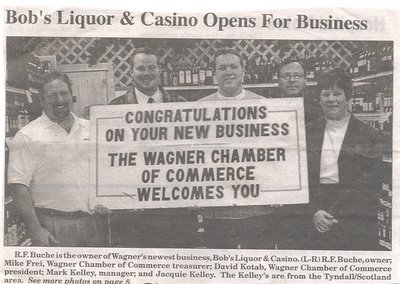 On the front page of this week's Wagner Press is this picture announcing the opening of Bob's Liquor and Casino in Wagner. What does that have to do with politics? On the very right hand side of the above photo is former Pierre State Senator Jacquie Kelley.

Jacquie defeated long time Senate Minority Leader Homer Harding in an upset election, and served for two years before being subsequently defeated by now Governor M. Michael Rounds. During her first campaign, Jacquie had an insipid commercial (admittedly, it worked, she got elected) with Whitney Houston singing in the background "I believe the children are our future..."

I'm just kidding. Seriously, Jacquie was a formidable opponent, and after her defeat was long involved with serving the people and children of Hughes County, and was instrumental in the establishment of the Eastside Center for kids. She's certainly given back to the community and we wish her well.

It's noteworthy to see her in Wagner (and that she's living in Tyndall/Scotland). It's not outside of the realm of possibility to see her running in that legislative district in the near future.

And yet again, More PUC Stuff?

The PUC is the hotbed of activity lately. Big SDWC Congratulations are due to Former Tourism Director Patty Van Gerpen. Patty was just named the new Executive Director for the Public Utilities Commission.

Amendment P is for Poker

Todd Erks, a Bar owner of Tea, SD, who has had a little trouble reading that law about gambling and games of chance has decided if you don't like the state law on gambling, you should just change it.

A few days back he said he was going to circulate petitions to change state law on gambling and Bill Harlan of the Rapid City Journal has the scoop on the fact that the petitions are out in circulation.

Todd’s Place is near the Harrisburg exit on Interstate 29. Erks described it as a “meat and potatoes” bar.

Anonymous said…
Funny one on Jacquie Kelley. Smart to give her credit. If we all gave as much back to the community as she does, the world would be a much better place.
4:32 PM