By PP - September 25, 2006
You know, I run across these things in the newspapers, and I sometimes forget to bring them home with me from Brookings, or I leave the envelope they come in out in my truck. Or I get going on other things until they're not topical.

But the stars aligned for me this week, and I've got a whole batch of them. (And you can click on any of them to enlarge them): 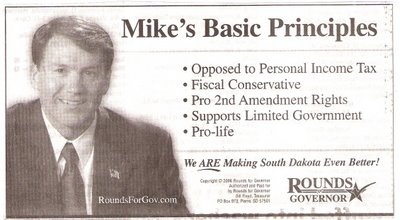 What do you say about this one? When you're Governor, you can afford the best. I might make the website a little more prominent, or I might choose different issues. But when you're the state's top incumbent, who cares. 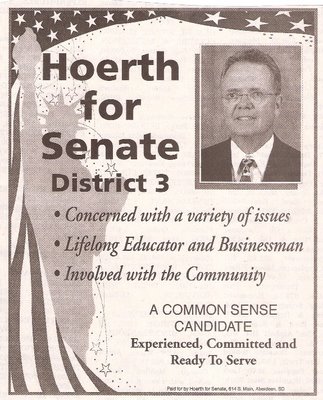 "Hoerth: Concerned with a Variety of Issues" What issues? It could be anything from concerned about the length of your lawn to concerned about the little green men who hide in your shed. The ad would be pretty good except for that statement of concern. I try to be broad on topics in campaign pieces, but there comes a point to tighten things up.

There's not much to quibble with here. I would have bolded the "providing support.." statement, and dumped the "currently serving" statement. But that's just personal nitpicking. It's a nice ad. Don't change it just for me. 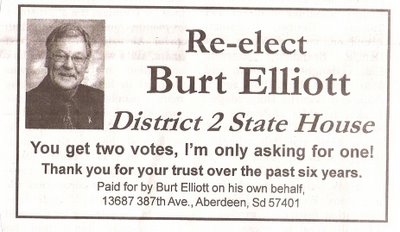 "You get two votes, I'm only asking for one." Bleaugh. Now there's a reason to support the incumbent. If you dumped that statement, the ad would actually be OK. With it? ehhh.... 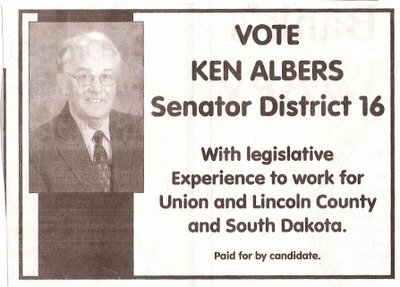 I think I've mentioned before how I hate "paid for by candidate." That, and it's a pretty plain jane ad. Show me some personality. 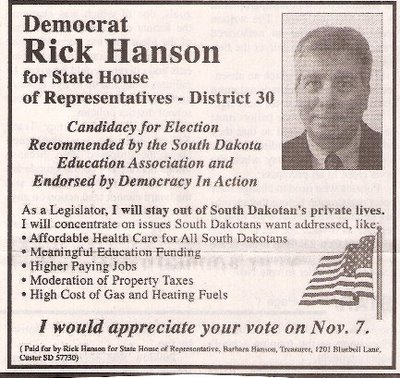 Now here, we have too much personality. Or at least too much information crammed into one ad. I think I would have had enough material for at least three ads out of this one. That, and as far as SDEA and DIA go, how much clout does Rick think they hold in District 30? 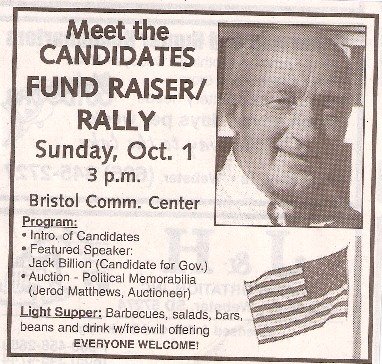 If you've gotten to the level of running for Governor, you'd think that someone on your staff would remember the disclaimer? (you know, that silly little statement required by state law).

Anonymous said…
There is no available evidence that Jack Billion had anything at all to do with that ad.
10:29 PM

PP said…
Who said he was?

But, in most any statewide campaign, it's S.O.P. for any ad that is using the candidates name and photo to at least pass under a staff member's nose.

In any I've been involved in, it's always been a stipulation, just for this reason - because you don't want to be held to task for someone else's stupid mistake.
10:51 PM

Anonymous said…
"Concerned with a variety of issues" That just might be the most meaningless statement I've ever read in a political ad. Is that what one does when one doesn't want to commit to any issues?
Re: Billion's ad - There also is a possibility that the person who set the ad didn't remember to include the disclaimer. It happens.
11:17 PM

Anonymous said…
I like the Elliott ad, I think it's cute , catchy, and different. Actually I dislike the Garnos ad, the bullet points are vague and meaningless to me, except I despise special breaks for the movie industry.
11:52 PM

Anonymous said…
PP What's wrong with Elliot reminding everyone that they can cast two votes? Or is it the way he said it that you don't like? Lots of voters have a favorite candidate, this reminds them that they can cast their other vote for him.
6:30 AM

Anonymous said…
I like the Elliot ad. It is a clever, subtle way to remind people to vote, and to vote for him. I'm not sure I know what Garnos is trying to convey. That he likes movies I guess
8:00 AM

Anonymous said…
Most sentient beings in District 3 higher on the biological scale than earth worms understand what the line in Al Hoerth's ad, "Concerned with a variety of issues" refers to. His opponent is concerned only with one issue and that is why he won the primary over Duane Sutton. Al Hoerth is simply letting people know that his political sensibility extends quite a bit further than his opponent's.

And isn't it embarrassing that the Republican slate in District 3 can only muster playground snarkiness in the comments above in their attempts to demean Al Hoerth. Your mentality shines through like neon fingerprints, boys, and Al Hoerth and Burt Elliott and Ted Kneebone by simply being elected can lift District 3 politics out of garbage can.
6:02 PM

Anonymous said…
Don't make Hoerth Angry. You wouldn't like him when he's angry.

(then he use big words rebutting blogposts)
6:09 PM

Anonymous said…
I was surprised to see that a dude who vows to stay out of private lives is so in touch with what people want in their private lives. Typical lib talk. The old, "I am pro-abortion, pro-gay marriage, pro-legalized marijuana, pro-erosion of the family" code speak, followed by an "If I'm elected, we'll socialize everything and you will like it!" statement. I don't know who is running in District 30, but I hope this guy isn't elected.
2:48 AM