South Dakota Democrat to run for President.
No, Tom isn't getting into the race.

By PP - May 01, 2007
I noted it in passing that a South Dakota Democrat has entered into the Presidential Primaries. And it wasn't Tom Daschle.

Although, none of the other South Dakota Democrats seem to be endorsing this long shot candidate, as they've signed on with Obama in the case of Tom Daschle, or Edwards who has Congresswoman Herseth's support, or any number of other presidential hopefuls.


Dang them for picking someone who has a snowball's chance in hades. Because Karl Krueger is in the house: 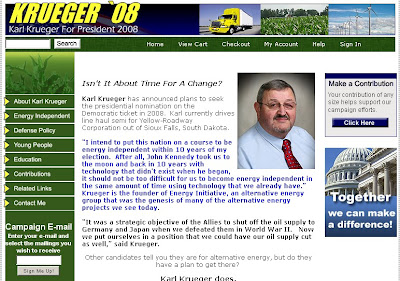 Could the next president of the United States have been at the 2007 Mid-America Trucking Show?

Not likely. But truck driver Karl Krueger, a self-described conservative Democrat, is going to give it his best shot. One of his catches: He won't accept any campaign donation more than $50.

Krueger's ambitions may raise eyebrows. If you watch Fox and CNN, you won t find his name sprinkled among the McCains, Giulianis and Clintons. That s because he hasn' t talked to the major media outlets. Instead, he has pitched his platform to small-town, weekly newspapers in the Midwest.

Read it all here. Now Karl is working on building a broad based coalition by courting Republicans:

The parties can be defined by greed. If someone is concerned for others they are Democrats. If they believe only in their own wealth and comfort they are Republican. It is just that simple.

(Read that over at Politics One Blog.) .... And Karl is also courting those members of his own party who may be riding the fence over those major candidates:

The truth is I am a very long shot but I can win the primary and the general election with a little help from the economy. I am facing a lot of money and a very determined bunch of GATE KEEPERS that have a vested interest in keeping me from winning.

Read that on his blog.

Apparently Karl's claim to fame is that he ran for Congress once. In Wisconsin. In about 1996.

Other than a platform of the fact he and his brother sold JFK a Chocolate bar in his youth, I'm not sure what he has to offer the national electorate. Heck, I has a sack lunch with President Bush (sr.) on the campaign trail in 1988. But you don't see me running for president.

Now, don't get me wrong. I'm sure he's a nice man, and his military service to the country is admirable. But, I'm not seeing where his base of support is coming from. Has he ever been involved in the SDDP? Is he a state or national leader in some way which is relevant to our lives?

Well, all I'd have to say at the least that his wife probably deserves to be first lady. Because she certainly sounds tolerant. Very, very tolerant.

Anonymous said…
This guy, laughable as he may be, has more courage than PP.

It's easy to sit on the sidelines and toss grenades at the contenders.

But actually (wo)manning up and throwing your hat in the ring, that's a whole other story, one which PP can only write (or reminisce) about.
2:12 PM

Anonymous said…
Did i detect a cut and paste on the website? If so wouldn't he need to give credit.
But hey maybe i am wrong...
Did he ever get elected in Wis. to the state legislature? Does't seem so.
By the way PP is not at fault he is writing about something he found. Did any of the other posters find this site? So far doesn't seem so.
12:02 AM

Anonymous said…
Holy piss! The Breck Girl has Mrs. Sandlin's support! Next thing you know, she'll have a hairdo that isn't so hideous. Don't worry, Mrs. Sandlin, Tina Turner has been pulling off that same hairdo since the 80's. You're sooooo stylin'!
1:47 AM

Anonymous said…
You know, he just might have a chance when the electorate gets fed up with both the Dems and Reps!!
8:11 AM

Douglas said…
The guy says some things that make a lot more sense than Bush or Hillary or Rudy G are saying or have said.

Frankly, I don't think anybody should be allowed to contribute more than $50 to any candidate for anything.

And corporations should not be allowed to contribute a thin dime to any politician or political action group.
11:41 PM

Anonymous said…
I know I'd sure vote for this guy over Hillary.
1:58 PM

Daniel said…
Thanks for mentioning my blog!