Ugh. It's that time of year again.
Political Catalog time. 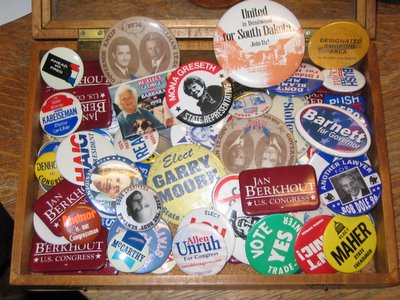 See my little box of political buttons? It sits in an alcove at the top of my desk hidden away from the world. My collection used to be much more expansive with some really cool SD ones, including a early 1900's (1900's or 1910's) set of matching ribbon badges in mint condition from the SDGOP and SDDP state political conventions.

This box, and my "Headquarters - Harrison/Morton Club - Deadwood, Dakota" silk campaign ribbon of 1892, which always was the prize of my collection, is about all that remains from my collecting heyday. 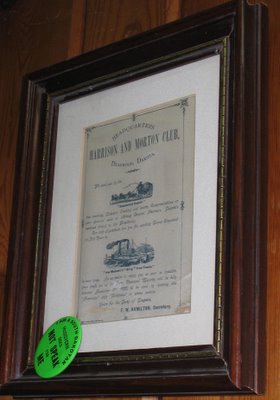 It mostly fell victim to my all consuming need to keep my family fed and clothed earlier in life. Hobbies are nice, but when your kid needs dental work, etc., sacrifices must be made. And so my box of political stuff has dwindled to what is pictured above.

The point of all of this is that these buttons, as most of them ever produced, simply end up in someone's box of stuff. They didn't end up on my coat. They weren't affixed to my shirt as I strolled around the neighborhood. My neighbors didn't see them and say "Pat, I see by that maroon rectangular button that you must be voting for Jan Berkhout for Congress. I must support him too." Nope. Didn't happen.

I got them, and they ended up in a box.

I talked about this a little in a post I did back in June of 2005. The premise then, as it is now, is that political buttons are a poor investment for a candidate. A campaign spending money on political buttons makes as much sense as me, a father to six, buying a flashy new Ford Mustang.

Like most political campaigns, I don't have money to burn. A new red Ford Mustang Convertible would be an instant gratification thing that would be really, really gratify me. But it would serve me very poorly in the long run. For me, the benefit does not justify the expense when my money needs to be spent in a much more utilitarian fashion.

Would I rather have the Mustang? You bet! But what I need is the ability to pay my electrical and gas bills and to transport six kids at a time. (It's the used Chevy Suburban life for me).

I've worked on statewide campaigns, and you should see the requests come in nationally from collectors. Some are nice enough to send $5-10 for your trouble. Some just send in a self addressed stamped envelope. But, just like the ones you give to the in-state people, they're going out-of-state to ending up in a drawer or on eBay.

They just don't make sense for anyone at a level lesser than statewide. And they're still pretty silly for statewide candidates. It's why I've always advised against getting them.

At a legislative or local level, the only time I've ever seen anyone get them is because someone just can't stand it, and they want to see their name on a button because they're running for office. It's as if it they really aren't a candidate until they see their own name on a circular metal disc covered in paper and plastic. But it's still a new Ford mustang on a used vehicle budget.

Forget the fact that the $200 they blew on political buttons would have paid for a mailing. Or for more than a dozen drive-time radio ads. Or a good sized newspaper ad. Nope, they felt it was more important to see their name on a button.

Especially when so many local South Dakota candidates have the inexplicable handicap that they don't think they should have to spend more than "x dollars" or so on a political race, why would they put a significant sum of money into something that's going to end up in a drawer? I've never been able to figure that one out.

But my advice to candidates has never wavered. Buttons? Don't do it. The money is better spent elsewhere. Buttons don't get you elected. Effectively communicating your message does. Buttons just end up in a drawer or on eBay. And that's all I have to say about it. 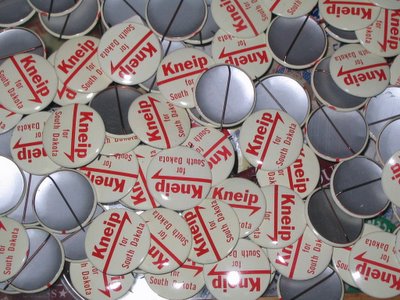 And in case anyone is in the market, I'll make you a hot deal on some old "Kneip for South Dakota Buttons."

I've just got them sitting in a drawer.

Anonymous said…
PP, judging by the number of Berkhout buttons I assumed you did some work for him. Absolute nutcase. Compared to him Tom Bilxer would probably be someone worthy of support.
12:17 PM

PP said…
Actually, anon, no. I just go to that many political events. If there are buttons to be glommed, collector me gloms them.
1:51 PM

Publisher said…
Next time you're in Pierre, give me a heads up, and we'll make medicine. Providing you have any buttons leftover!
2:53 PM

PP said…
I'm here all the work week, every week (at least for the forseeable future)
5:07 PM