By PP - July 25, 2006
I see this evening that fellow blogger and state legislative candidate David Newquist is beating me about the head and shoulders again.

I'm not sure why. When I commented on it before, it was from a purely academic point of view with regards to how I didn't think some of his statements were wise for a candidate for office to be making. I specifically noted that:

"For someone who is quite educated, I'd argue that Dave says a lot of things that leaves many people scratching their heads, and asking themselves "He's really running for office in South Dakota?"

I also disagreed with his rhetoric, because I thought it showed a lack of respect, but that was secondary to the point.

Tonight, I see he took offense to that assertion, and took a moment to use big words at me:

I can envision the would-be character assassins slobbering over their keyboards at the thought of taking a real, live candidate out with their dishonest little missives. After making some points about the fact that a symbol, like the flag, is not the thing it symbolizes, I ended with what is an obvious rhetorical question to those literate and educated enough to read it.

South Dakota Politics and South Dakota War College are symptoms of the degradation of American politics. Issues cannot be examined and discussed. They can only demonstrate a vicious disrespect and a seething hatred for people who do not subscribe to their party line. They always meet opposing viewpoints with a rolling of the eyes and a defamation of personhood and personality. This is the politics of the lower order creatures clawing and pecking their way to a higher status within the dog pack or the chicken flock. It is the politics of the reptilian cortex. They stand for the opposite of the freedom, equality, and justice that are the driving principles of American democracy. I fought against these kind of political tactics in the military service. I fight against them now.

When a couple of petit-jihadists denigrate my patriotism and my service to my country through a contrived misconstrual of my words, they define themselves as enemies of what the flag truly represents. At least the flag that I served under.

The task facing America is to lift politics out of the intellectual dereliction into which it has fallen. Blogs such as South Dakota Politics and South Dakota War College demonstrate a massive failure in education.

And blah, blah, blah.... Sorry, my reptilian cortex has a short attention span, due to the failings of my education. And I need to wipe the slobber from my keyboard. But my point is... again - AGAIN he misses the point.

As smart a man, and as entertaining a writer as he is, I don't think Dave knows diddley about running a campaign. Because he says too many things that are going to come back to kill him in this election. (That, plus arrogance and total disregard for his opposition.)

I know the type. I've seen it before, and I'll continue to see it again. For him, the debate is about proving his self-perceived intellectual superiority. For those of us relying on our reptillian cortexes, it's merely about winning.

He claims that we attempt to achieve this ignoble task of winning by use of our "dishonest little missives." My point remains simply that aside from disagreeing with him which is a right even afforded to those with a propensity to drool, there are some things that are stupid or at the least, controversial, for a candidate to say. Such as.....

"However, that tactic still works in McPherson County, which a campaigner from the last election says is a hotbed of intolerance and repression."

"Democracy is failing, and Aberdeen is a case study of how and why."

"People will go where they can realize the promise of America. Where does that leave Aberdeen?"

and those are the tip of the iceberg.

Sure, he might be posting them as rhetorical questions. But they were uttered from his mouth or birthed from his personal musings on a word processor. Or is he going to now deny his own words?

Just to prove my point, here's how a few selected quotes from Dave could be used in the course of a campaign. I took about 5 minutes, and designed a little postcard which he might expect an opponent, or political committee, might mail something similar to the voters in his district. It does an ok job of illustrating his opinion and words on a number of topics in the short time I spent on it: 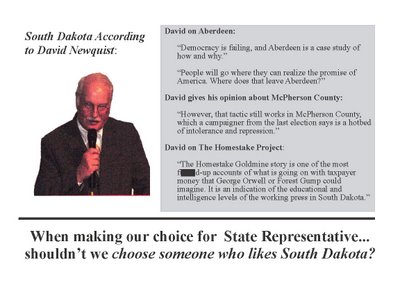 I especially like the one where he specifically says "The Homestake Goldmine story is one of the most f***ed-up accounts of what is going on with taxpayer money that George Orwell or Forest Gump could imagine." Except he didn't use the asterisks.

Lets see how many of the Democratic legislators who voted for it are going to stand with him and agree. I suspect the number will be ZERO.

So, if my limited education can wring one more thought out of my head: Dave, you go ahead and continue to take the high road. And I'll take the low road.

And I suspect my guys will get to the legislature before you.

Anonymous said…
Maybe he's not necessarily trying to win. Maybe he's trying to make a point, and maybe a this is his best way of doing that. Maybe he knew he was going to lose from day one, and maybe he doesn't care.

Did you ever stop to consider that?

I doubt it. You've got some decent political advice on this blog, but you don't see the big picture very well.
8:47 AM

Letter to the editor - about $.40, including the stamp.

Running a political campaign for State Representative in Aberdeen - $5000-$7500.

The point must be spending money like a sailor in a whorehouse. Because if all that Davey Boy is trying to do is to make a point, there are cheaper ways to do it.
8:58 AM

Anonymous said…
David Newquist is not a serious candidate for the state legislature thus his interesting quotes will not change his chances of getting elected.

David has said many times the reason that liberals lose elections is that the voters are too stupid to vote correctly.

Anonymous said…
good move- run for the legislature and lose the respect of all who are there already by telling them they are f$%*#d up. nice.
1:44 PM