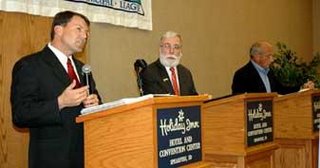 Governor Mike Rounds debated challenger Jack Billion in Spearfish yesterday as reported in the Rapid City Journal (where this photo is from). The debate was moderated by Santa Claus:

The Republican governor answered challenges from his Democratic opponent, retired Sioux Falls surgeon Jack Billion, during a debate at the annual conference of the South Dakota Municipal League. When Billion questioned the effectiveness of the governor’s economic development policies, Rounds noted the state’s nation-leading 20.5-percent increase in per-capita personal income during his first three years as chief executive, as well as the addition of 18,000 jobs statewide.

“And those are good jobs. They’re not low-paying jobs,” Rounds said.

In addition, the gross state product has grown to a new high of more than $29 billion, Rounds said.

Billion questioned the governor’s numbers on job creation, saying Rounds had previously used different figures. Whatever the actual number, Billion said, they were created by private-sector development, not by the governor and his policies.

The Rounds administration has been successful in creating new jobs for state employees at taxpayer expense, however, Billion said.

Rounds said he had nothing to apologize for in the addition of the equivalent of 1,000 full-time positions in state government. About 700 of those jobs were in the state higher-education system, often for professor and essential research-assistant positions necessary to move the state forward in education, research and technological developments, Rounds said.

Many of the other FTEs were state-government positions in areas such as fire protection and prison guards and drug dependency counselors, Rounds said.

“I make no bones about it; I will ask for more FTEs when I think they’re justified,” he said.

Read it all here at the Rapid City Journal.

Ho, Ho, Ho. No toys for Jack Billion at Christmas. Or in November.

Anonymous said…
The moderator knows who's been naughty or nice.
9:09 AM

Anonymous said…
At one point, Jack Billion made a statement so outrageous that Jim Shaw, in a fit of rage, rushed outside to punch Jack's E85 van.
9:37 AM

Anonymous said…
Rounds in unapologetic about adding 1,000 state employees. Is this bid spender the Democrat or the Republican in this race. What happen to Republicans who believed in "government is best which governs least"?
11:56 AM

Rounds is the best thing that has ever happened to Pierre Economic Development. More state jobs is good for Pierre. Problem is the rest of the state picks up the tab.

Now that's leadership and vision for Pierre at least.
11:57 AM

Anonymous said…
Do you guys realize that over 700 of those FTEs are research assistant/intern positions at our universities and under control of the Board of Regents- which the Governor has no control? Due to increased investment in research and development at our universities, there are more opportunities for our kids to stay here in SD and find good jobs.
12:22 PM

Anonymous said…
I am surprised Rounds even showed up for the debate. Chickening out on the last two I am confused why he even bothered.

I mean do the citizens of South Dakota even deserve a public debate about the issues? Hell no! All they need to know is know who is Anti-Choice and Pro-War. The Repubs should win on those two issues. Screw the rest. Imagine somone even questioning Rounds on Jobs, healthcare and education funding, just pitiful. Pro-Life, Pro-War and a Red state, a formula to win right.

Anonymous said…
Anon 3:57, we don't knonw a heck of a lot about Whalen because his opponent will not debate him. Are you equally upset over Princess Stephanie's unwillingness to debate?

Anonymous said…
Anon 5:09 - That is so lame. There are plenty of other ways for Whalen to get that information out to the public. Instead, all we get out of him is finger-pointing and excuses. His name fits him well if you change the spelling to WAIL'N'.
6:24 PM

Anonymous said…
Geez, pp, you could have at least TRIED to put some of Jack's thoughts into your overview.

Rounds is thin; a true paper-tiger, as is -- I suspect -- his Happy-Happy-Day support.

Anonymous said…
Think it through, 8:11. Smile, like all the other donors and vote for Rounds. Not much of a choice.

I am serious that there are literally thousands of teenagers (no Foley joke here) that would have been better candidates than Whalen. The guy is an absolute joke and no one is to blame (not even Bruce himself) except for Randy Frederick. Which, of course, gets back to the last anons concern about Rounds.

Lord, it harkens me back to when a party strategist said to me in early 2000 when Bush was pulling ahead of McCain (after the black daughter, drugged wife campaign in S.C.) that we should all admit we are about to elect and idiot to the presidency.

Well, I don't consider Rounds or Bush to be idiots, just the 10,378 most qualified person to hold each position...there are several people on the hill and springfield that have the edge over Whalen.

Anonymous said…
No one mentioned it ,or asked, but isn't the moderator RC Mayor Jim Shaw? Also, to say that the Gov has no control over the board of regents hiring is a crock of bull. All of those positions were in the annual budget he submitted to the legislature, and had to lobby hard for to get through the legislature.
11:47 PM

Anonymous said…
what is this willis crap? is that you Lee?
10:21 AM

Anonymous said…
No, it's not Lee. Vote Willis-Johnsen for Governor! Where were the two other cadidates in this "debate"?
1:06 PM

I wonder if the hiring of all those university prof's are the reason Black Hills State cant pay my daughter ?

She works in the food service and they said they hope to be able to pay her on Oct 15th for her August hours !! Thats a long time to wait to be paid when you aint makin much anyhow. I bet those new prof's are getting paid faster than that !!

Regents are outa control !! I had higher hopes for the new prez up there
9:51 PM