Do you have all of your legs under your campaign media plan?

By PP - October 05, 2006
I was talking the other day with a candidate about their media plan. You know, how they intended to get their name out in front of the voters. And he told me about the newspaper ads he was doing. And how he was going door to door. And how he was doing TV and Radio.

I thought “That’s great!” And I asked him what he was going to do for direct mail.

What?!? No direct mail? How can that be? Blasphemy! That violates the rules….

Well, ok. Maybe it does, and maybe it doesn’t. There really are no set rules for what does and doesn’t work in each and every district. It can depend on your area and it’s own individual characteristics. And as I do more and more of this stuff, I’ve come up with a theory on campaign media. And I'm even going through the exercise of putting it to paper, because there are times I don't think of it myself.

What's my theory or "model" on campaign media? Think of it as "a chair."

Okay, it might seem corny and overdone, but this is the best way I have to explain what I think should be used for campaign media. And by coincidence, it actually seems to fit most situations.

There are four basic legs of the chair: 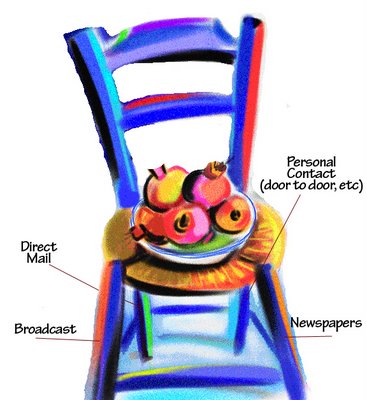 Now, why does a chair analogy work for my guy above who has three of the four legs? Well, if you haven't noticed, there are stools and chairs that only have three legs, and they do just fine. But, when you add the fourth leg, the chair (or campaign in this instance) becomes much more stable. You can do it with three, but in the long run, you can feel more confortable standing on a chair with 4 legs, than a 3 legged stool.

So, you can do door to door, TV, and newspapers, and forego direct mail, and you might be just fine. But the campaign ends up on more solid footing when you add that 4th.

Once we're past that, you might be asking "where do some of the things come in such as letters to the editor, a website, and billboards come in? How do those fit into the three or four-legged chair model?"

Well, on items like that, you're silly if you try to run a campaign simply on the basis of any of those. They're such a weak support that they can't be considered a major part of a campaign. They're secondary, and should be recognized as such. But they do serve a purpose in reinforcing your message (or chair). So, think of them in that manner - they're support: 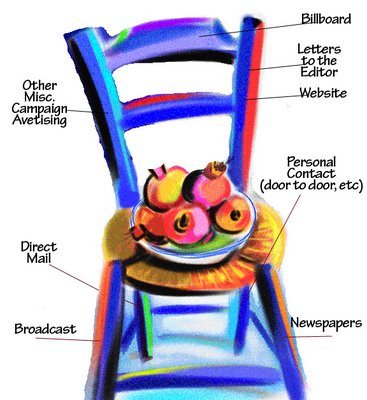 They complement, bolster, and strengthen your campaign, while the four major components of your campaign's media plan form a solid foundation.

Now much of this is assuming you have a campaign media plan (or even a plan) but if you don't - consider this. On the voter contact, this concept should provide you strong support in most any campaign from the local level to the statewide level. It allows the deletion of a component (such as door to door in a statewide race) without causing the rest of the model to be this thing you can't use or explain.

Now, this doesn't allow you to plug in numbers of things like that - you're still going to have to figure some of that out on your own. But at least you have an idea where to spend it and what's important.

So, in your next campaign, try instituting the SDWC Chair model for your media plan. As a basic framework, you might be pleasantly suprised with the results.

Anyone care to critique or comment? Am I wrong? What am I missing? The floor is yours.

Irwin Fletcher said…
You're assuming that the candidate has the money to spend on all of the various media.

I continue to disagree with you over the value of broadcast media. Most towns in SD have more than six different radio stations and people receive literally hundreds of TV stations.

Getting a message that's going to have any sort of market penetration is going to require a schedule of advertising heavier than all but the top legislative or governor's race can garner.

Campaign hacks like broadcast because it's simple. You cut a spot and distribute it to the stations you want. The pricing is even simpler than any sort of print (including electronic).

Broadcast also appeals to the vanity of the candidate. The people they meet during the day who have seen their ad will typically comment on it, while the print media gets less note because it's not a novelty.

Question the value of your local paper, or even direct mail for that matter? Take four words in six point text and inset them in the paper: "John Smith, domestic assault, fine $1,000"... and see how much comment you get.

The difficulty that has been and always will be in print is to make your advertising grab the reader and get them to actually read what you have to say.

PP continues to harp on this on billboards, newspaper ads, direct mail pieces ad naseum, but he is completely correct on it.

If I were cutting, the first thing I would cut would be broadcast.
1:22 PM

I agree that broadcast is misunderstood, and terribly misused. But so are other channels, like wasteful, poorly-targeted print.

And your RIGHT ... most political placement is done very lazily. No targeting; no true message crafting. They forget that broadcast advertising is not about schedules, it's about the quality of the CONTENT. "Oh, yeah, I guess I gotta make the comMERcials, too."

The major problem for those of us who are politically involved is this: most people AREN'T. They don't give a sh*t about local races. Automatons, they will show up at the polls with top-of-the-ballet decisons made, only to ho-hum through the state races and (most) ballot issues with little regard for content, qualifications or philosophy.

Do you REALLY THINK they read all that direct mail?

Well-performed and appropriately targeted broadcast is very powerful, and can certainly make the difference between winning and losing in a battle where a candidate's organization has researched resonant arguments, identified those that move the meter, and tested spot content consistant with the candidate's philosophy that moves uncommitted likely voters.

Besides outdoor (billboards), and door-to-door, broadcast may be the only way into these peoples' collective consciousness.
8:33 PM