Just a thought to leave you with tonight.

By PP - April 19, 2007
As I'm trying to get a few boxes pulled together to bring over to Brookings tomorrow, I'm finding that I have too much to do, and too little time. So blogging is taking a back seat until later. But to accompany the Tuesday post I did on today, April 19th, I wanted to note something that even I didn't know until recently with regards to the commemeration of the plane crash 14 years ago today. 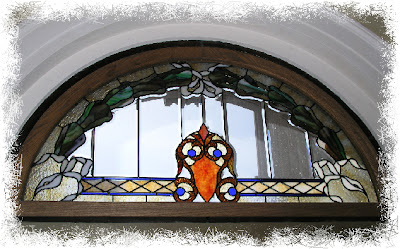 This is a recent addition to the State Capitol. In addition to the Fighting Stallions memorial, this stained glass was placed at the entrance of the Capitol to commemorate the loss to the families that day. According to the write up:

The stained glass window above the center front door of the Capitol was installed and dedicated on January 11, 1996. It was donated by the Capitol Club and is dedicated to the eight families who were victimized by the April 19, 1993 state plane crash. The design of the window is done in segments of eight to symbolize the eight men who lost their lives. The artist was Wayne Warvi from Rapid City, SD.

Whenever you enter the front doors of the Capitol, look up, and remember the sacrifice of those people who only wanted the best for our state. And carry those thoughts with you no matter what part you take in the political process.

Anonymous said…
So, who is the new guy on your headlines banner? Looks like David Bowie.
10:14 AM