By PP - April 26, 2006
The lighting was slightly better than what I had at the Hughes County Lincoln Day Dinner, so I managed to snap a few photos of our elected officials as they spoke. Vern Larson, Rich Sattgast, Bob Sahr, Chris Nelson, Larry Long, Lt. Governor Daugaard, Bruce Whalen and Governor Rounds gave the keynote. 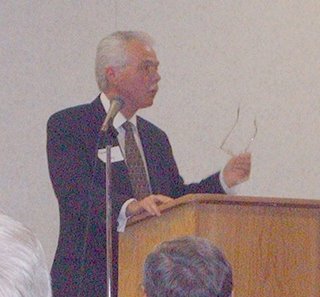 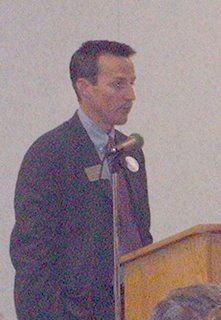 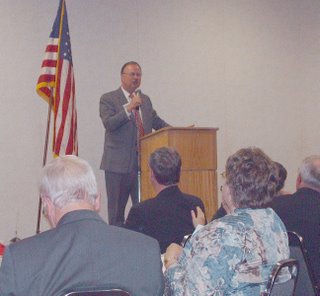 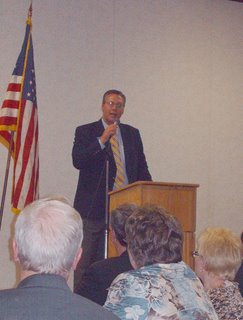 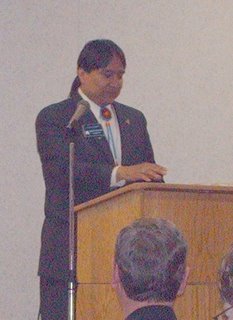 It was a good time. I got to see a few people I know from this neck of the woods. And since I'm going to the SDGOP convention this year as a Brookings County Delegate, I'd better participate as an active menmer of the local party.

Other than watching speeches, and meeting candidates, I spent some time chatting with my old boss during college, Keith Corbett, who just got a nice bump up as now #2 at the SDNG, as well as a few others. And my wife and I got to enjoy dinner with State Auditor Rich Sattgast and PUC Commissioner Bob Sahr. (It's like I never left Pierre).

Local digitaries were present, such as University President Peggy Miller, Al Kurtenbach, and former SD GOP Chair Dwight Adams. If you recall quite a while ago, I wrote how Dwight transformed the SD Republican party by opening up the process for precinct people.

Brookings Co GOP Chair Jackie Diedrich deserves big kudos for such a nice event. In speaking with her afterwards, I found out she'd printed the programs at home herself. She's the engine that keeps that County Party moving.

I also spent a few minutes speaking with her husband, Larry Diedrich who is running for his old seat in the State Senate this year. Admittedly, I'd never really spent any time talking to Larry before, but it's easy to see why he got the GOP Congressional nod in 2004. He's a pretty nice guy, and I can easily see him being promoted as a statewide candidate again in the near future.

My wife and I also spent a few minutes talking with Lt. Gov Dennis and Linda Daugaard. I got a moment to congratulate Linda as being part of SDSU's family of the year. Dennis earned forgiveness for going to that other school.

I think that was about the time we beat a retreat to go home and relieve the babysitter. (You know how much a 4 hour event costs for sitting 6 kids!)

Great event - I can't wait until next year.