Political signs I saw on my trip back to Pierre.

By PP - April 23, 2006
I thought I'd do something a little more personal and share with you the images I drive by every weekend as I go back and forth between Pierre and Brookings. Since I care about literally nothing but politics, here's my travelogue in political signs.

As far as political signs go along the route, the part of Legislative District 6 that Highway 14 cuts through has been the only one with signs as of yet. Samantha Stormo has led the pack for a few weeks now, and I've noticed that she has the best coverage so far. I see her signs starting between Iriquois and Cavour, all the way to Brookings. But as you see below, Paul Nelson has now entered the political sign fray. Here he has his sign by Samantha's in Desmet: 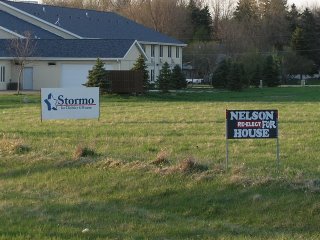 And here's his sign that sits outside of Arlington: 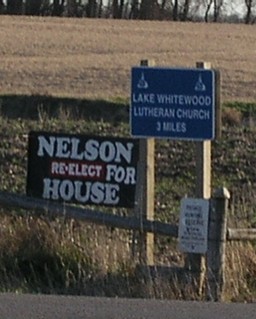 To his credit, Paul has decent coverage. If only his signs didn't look like a train wreck. It's like they said Nelson for House, and he wanted to add re-elect. Except now FOR was covered, and they had to add it. They should have just left it the old way.

They weren't there on the way over, but as I rolled through DeSmet this evening, I saw that a flock of Greenfield signs had gone up. In fact, I called Brock on the phone as I rolled though DeSmet, and he happened to be on the North side of DeSmet putting up signs. He had pretty good coverage on either side of town. 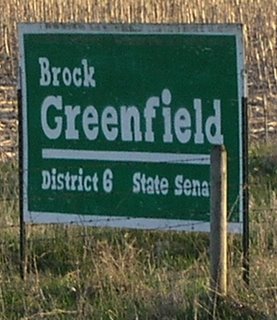 And useless trivia buffs, here's one for you - these are the same signs Brock used 6 years ago and every election since. They were my first attempt at making a template, and they still look great.

On this next one, I don't want to be too harsh. But seeing a sign like this really tests my limits for tolerance. 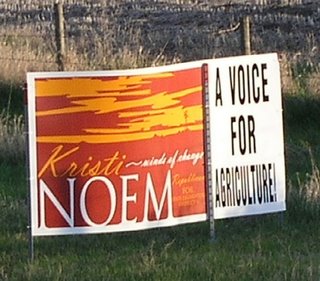 Here's a coroplast sign that I snapped as I approached DeSmet. It looks like it could be a combination of screenprinting and vinyl or just plain vinyl. Aside from looking like it's in the highway right-of-way, I'm guessing the cost for this sign to be about $100-150.

As a still picture, I can't tell what she's running for. And at 65 mph, it doesn't get any easier. And what is that logo. A friend of mine was going to use one just like it for a run at statewide office. Sunset and windmill, and I just gave him the business over it. Name and Office - you can never go wrong.

But that might all be based on my personal prejudice on using Burnt Umber and Orange. They just don't do it for me on campaign colors. (and yes Dusty, you were right and I was wrong. But I still hate orange as a campaign color)

As I came to this sign by DeSmet as I traveled West, the only other candidate to have any up in my route was Dennis Wiese, running in the Democratic Primary for Governor. 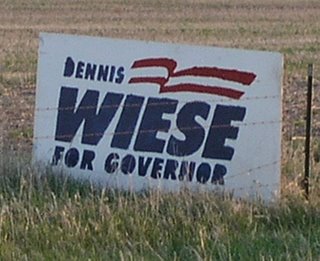 And I'd swear to god that it looks like it was manufactured by using the same process as I've described on this blog. (Somebody must be paying attention).

Anonymous said…
I don't mind the colors on the Noem sign, actually the rather stand out. The problem is a lot of wasted space and it's hard to read. The sunset, or whatever it is, could have been a subtle background in order to make the words prominent, not the picture.
12:14 AM

Unknown said…
"Since I care about literally nothing but politics...." --PP

Which explains why PP doesn't care about the fact that we put people in prison for trying to feel better.
8:47 AM

Anonymous said…
Do the Noem signs say what they are running for?
2:44 PM

Anonymous said…
PP said, "And I'd swear to god that it looks like it was manufactured by using the same process as I've described on this blog."

What process are you talking about?
3:08 PM

Anonymous said…
Who is "Starmo" and why does it not use all of the sign space? Why does it waste so much opportunity to enlarge it's name? I just wish I knew what a "Starmo" was.
4:56 PM

PP said…
Anon 3:08, if you dig back a few months, I did a complete tutorial on how to make a sign template. I'm just saying it looks like the Wiese people smartly adopted my technique.

And Anon 4:56, I'd take the Stormo sign as graphically pleasing and distinct anyday over some of the other signs. What's your beef with Samantha anyway?
5:11 PM

Anonymous said…
Orange, Red, and Yellow are all pleasing colors to the eyes; ie they sell well. Look at logos on food products, on storefront signs, etc. Now, does that translate into a good color for a political sign? I dunno; I suppose it depends on the ultimate layout. But Dusty's PUC signs were hard to ignore (god knows I tried), so maybe that says something.
Apologies for being long winded.
5:31 PM

Anonymous said…
Your ideas....you can't be serious. You're not the only one who knows a little about campaigns and elections.
5:31 PM

PP said…
Mike, admittedly, I'm a traditionalist with the Red White and Blue thing. And green is OK for Young Candidates. (It's what I was taught by Gypsy Hines).

I, along with State Auditor Rich Sattagst, over the course of the past 6 years figured out a way to make 4x8 highway signs that look almost as good as if they were screenprinted.

In fact, it's one reason I taught myself screenprinting - and built my own equipment. Because I wanted to take it to the next level of quality.

And recently, I shared much of what we figured out. Of course, I didn't share EVERYTHING. But enough so candidates I wasn't assisting would be able to do enough of it themselves.

My point was that it looked like Wiese adopted some of the techniques I described on the blog, which I consider good practices.

God knows I didn't originate the South Dakota 4x8, but Rich and I have refined it greatly.

Anonymous said…
She's too young and should leave the politics to the grown ups.
9:41 PM

Anonymous said…
so says the commenter hiding behind anonimity
10:24 PM

Anon 9:41, aside from sounding like someone who's team is running scared, do you want me to point out statistics on how often younger Republicans win against older candidates?

Anonymous said…
This is Anon 4:56. I didn't post about the "grown-ups." I don't necessarily have a problem with Samantha, I believe her signs to be weak and potentially indicative of other problems. I think, as is often the bigger problem in South Dakota politics, she accepted average, when, with a little effort, it could be great. If she were to tweak her signs (I have posted other ways her signs are weak) they would be great and would have maximum effect, but her unwillingness or inability to do so make her look to be just like any other candidate who is willing to accept being average. If you were as talented as you seem to profess, I would think you could see that.
4:37 AM

Anonymous said…
At least they were made at home, and willing to put in that much effort to put the signs together should show the people of the district how willing she is to put the work in for them.
11:19 AM

Anonymous said…
Don't care for the Noem sign, name at the bottom, hard to read logo and if it as you say the cost could be between $100.00 to $150.00 each, makes me wonder what this woman could be doing with the State taxpayers money, if by chance, she is elected? Scary huh?
1:32 PM

Anonymous said…
We all know you're working for Stormo so give us a break. You've got pictures o her plastered all over your blog and are ripping apart the most charismatic candidate we've got in district 6. I'm for Noem all the way - a proven leader with experience.
10:34 PM

Anonymous said…
whether it's true or not, how does it make the sign not suck?

Anonymous said…
The signs I am using were approximately $33 in cost for the 4x8's and they were the most cost effective ones I researched, including painting my own. Just wanted to clear up the misinformation on the site. Also, most of the signs say House, Dist. 6 in the black letters to the side, which is easily readable and this sign, nor any other Noem signs are in the right of ways.
10:59 PM

PP said…
Anon 10:34 and others, this is getting to be much ado about nothing. The simple facts are:

#1 - I don't like Brown and Orange as campaign colors. And I like them together even less. Some people agree, some don't.

#2 - From the sign in question, you cannot tell what office this is for. Especially at 65mph. I know because I drive by it 2 times a week (4 this week).

#3 - I have lots of people's pictures on my weblog. Stephanie Herseth, Frank Kloucek, and Stan Adelstein (as portrayed by Eric Cartman). Are you saying that I'm staunch supporters of theirs? (I wouldn't consider "a" picture, plastering.

and lastly, If I don't care for something, I typically explain why under my name (not anonymous). If I choose to "rip apart" somebody, I'm going to do it based on their views, statements, or actions. (see Stan Adelstein, or Jim Holbeck for examples). Saying "I don't care for that" is not ripping apart.

I do it for fun and entertainment, and because I am passionate on behalf of people I support.

Don't like it? Start your own blog. I'm going to write mine as I see fit.

PP said…
And Kristi - If you're getting those for $33 each, I'd like to know where. And whether that includes the art and setup charges.

Maybe I'm making a false assumption and prices have gone through the floor, but I have my doubts that you can purchase signs like that in South Dakota for $33.
12:17 AM

Anonymous said…
Does District 6 sound like a Snow Queen pageant or a political election?

Anonymous said…
You are making false assumptions. The signs were made in South Dakota and I did pay $33 per sign and for the entire sign, not just one side. If you have further questions, give me a call...after the primary....
11:34 AM

Anonymous said…
PP if you want to go hammer on something, check out her campaign card on her website - it doesn't say what office she's running for.