By PP - May 25, 2006
If you notice the comments on the post immediately below this, where I pointed out a tiny zinger at the Dems, someone noted my spelling error in the title. Yes, I admit it tends to throw a wet blanket on a zinger when you screw up a word in the title post.

Anyway, aside from a little DaVinci-code-self-flagellation, I got some great news today - I have an election evening gig that I'm pretty excited about, but I'll have to share it a little later.

What else is generally going on in politics around South Dakota?

Heard State Senatorial Challenger Jim Holbeck was on KWAT's "What's Up" program today, and had a really muddled answer when asked by the host "Why are you running?" Probably not a positive.

One of the first things I tell candidates (and I've blogged about before) - have a clear and concise response for that question. It arguably cost Ted Kennedy a presidential run when he mucked that one up on National television. Why should it do any less for other candidates?

Previously on the program, which is interviewing all the district 6 candidates, I heard that Kristi Noem was on and did well. But she also took after Paul Nelson on an issue, which shows how competitive this primary is. Both Samantha Stormo and Brock Greenfield are up on the program this next week (I wish they did an internet broadcast).

As you can tell by the Rapid City Journal today, the Schmidt/Duniphan race has completely overtaken the Napoli/McCoy race as "the other" intense race in Rapid City. The anticipated battle royale that the Napoli/McCoy race was anticipated to be just didn't happen. Bill is out there working the election and getting his name in the paper. And aside from the blunder of using old material for the wrong race, Alice seems to have rolled over to play dead, unless someone cares to get me information to the contrary.

Speaking of Bill Napoli, he issued a letter in response to David Owen and others at an Amendment D forum dogpiling on Jim Hundstad. From the release:

I read with utter dismay and disgust the article about Senator Hundstad and the property tax measure Amendment D. First and foremost the treatment afforded Senator Hundstad was deplorable. Senator Hundstad is an elected official of the state of South Dakota, and should be afforded the respect due his office.

The laughing and shaking of heads at Senator Hunstad’s comments is inexcusable, especially from other elected officials regardless of whether or not they agreed with his comments. This uncouth rabble owe Senator Hundstad an apology for their atrocious manners.

Second, never have I seen anything so simple as Amendment D twisted and mangled by opponents. Amendment D does nothing more than change our method of assessments. Our opponents have stooped to the level of shameless scare tactics to get you to believe Amendment D is terrible.

The leadership of several high powered groups are lining up against Amendment D. Many for self interest, some because they are afraid of change and some are simply too lazy to do the work involved in the change.

Let’s get the facts straight! There is no hidden agenda, no hidden tax increases, no special self interest as David Owen and the South Dakota Chamber accuses. Owen needs to tell the whole truth. We need to tell the rest of the story so you, the property owners and taxpayers, have the facts.

David Owen, lobbyist for the South Dakota Chamber of Commerce claims it will take a 2/3rds vote to implement any mil levy change. Not True! Legislative history shows a simple majority can change the mil levy. The legislature has changed the mill levies many times over the years, always with a simple majority.

No legislator in their right mind will vote to reduce revenue for our schools. This is just hysteria from both David Owen and the education lobby.

Owen claims there will be a tax increase to utilities that will be passed onto consumers. Not True! Utilities are centrally assessed and are exempt from Amendment D.

Owen and others claim there are too many unanswered questions! What unanswered questions? These opponents of Amendment D did not invite me to their lambasting of Senator Hundstad. These opponents looked for and found in Senator Hundstad an easy target. Sen. Hundstad is a supporter of Amendment D, but not 100% knowledgeable of the workings for its implementation. So, they tore him up with illegitimate questions they knew he could not answer. I could have answered every single one of their questions.

If Amendment D is not the answer for you, Mr. Owen and all the rest of you who attacked Senator Hundstad, What Is?

Do we just keep the present property tax system that’s driving Ag producers off their farms and ranches, home owners forced to sell their homes because they can’t afford the taxes anymore, businesses to either cut back on employees, benefits, raises for their employees, or just close their business because the taxes just keep going higher and higher? Do we continue to put our property owners through these blood curdling equalization hearings?

I also want to talk about David Owen and the South Dakota Chamber of Commerce’s agenda. Remember, this is the same group who fought hard to defeat the repeal of the Inheritance Tax that has saved many farms and ranches, family homes, and businesses.

David Owen and the South Dakota Chamber of Commerce’s goal is to kill Amendment D and then repeal the 150% rule, which will raise taxes on Ag producers. Owens’ agenda will force Ag producers to sell their family ranches and farms, most likely to out of state interests, because the taxes will far exceed your ability to stay on your property.

You may be asking why he and his group would do this. It could be so they can lower taxes on Owens’ big commercial buddies. Think long and hard about who is opposing Amendment D and why. Owen and his big dollar organization have one agenda, shift taxes to Ag producers to supposedly lower taxes on commercial property.

Jim Hundstad is facing a rematch with Republican Brian Johnson this fall. Depending on how the proposed Amendment D plays in Aberdeen, Hundstad could be in trouble.

Another thing - I'm quickly coming up on my 1000th post! I'll have to do something extra special for that one. Possibly proof reading it for spelling might be special enough.

And I couldn't resist after seeing this ad in the newspapers this week: 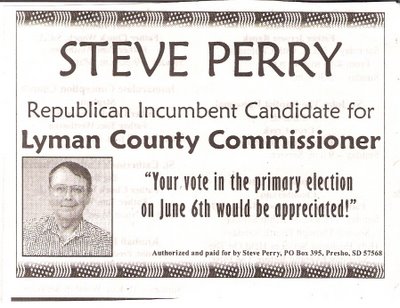 Oh, Sherry! Is he ever showing his age since he left Journey. He should learn to "Be good to yourself." Actually, it's a pretty decent ad. I just couldn't stop chuckling after noticing he shared a name with the lead singer of a 1980's rock and roll band.

Anonymous said…
I am going to bet that election evening gig is to give the "bloggers perspective" for KELO or maybe a national news network.