By PP - February 23, 2006
Tonight was the District 24 Lincoln Day Dinner which I attended to give you readers the tidbits, the controversies, and to monitor the runway so you could know the fashions.. Well, maybe not, but I went to support the elephant in my own little way.

I got there a little early (mainly so I could get a good parking spot) and came in while candidates were putting their literature on the tables. Jarrod Johnson was busy spreading the message of his campaign as you can see pictured here: 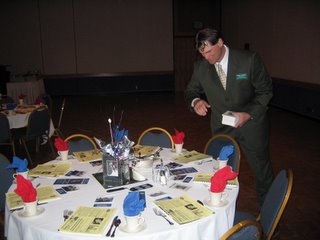 (Jarrod works while on the rubber chicken circuitcampaign trail)
and others such as Bob Sahr, Chris Nelson and Governor Rounds were also "tenting the tables" with literature.

Inside the hall at the Ramkota Inn in Pierre, they had a really, really nice display of political buttons that normally reside at the GOP State Headquarters in Pierre. They were donated to the party by Don Carlson's family upon his death. I'm happy to report that the GOP has them beautifully displayed in more than a dozen black frames.

The Republican Women had set up a silent bake sale auction for goodies, and lots of people wrangled over a number of things. I didn't get a sniff of the triple layer carrot cake, but State Auditor Rich Sattgast whom I sat with ended up with 2 of them. 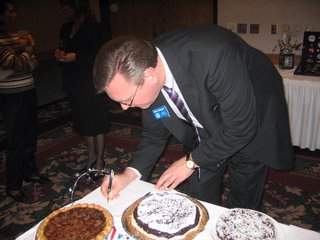 (Rich bids on a big cookie)
The program included a number of introductions, including GOP Congressional Candidate Bruce Whalen who spoke to the crowd... 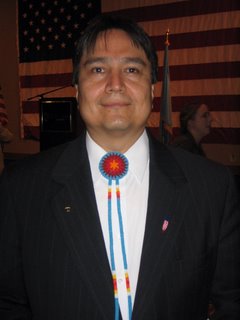 (They call him Bruce!)
As well as introductions of all the constitutional officers and candidates. Pictured here is the back of Attorney General Larry Long. As you will note, the lighting was terrible and I was about as far back from the stage as I could be. 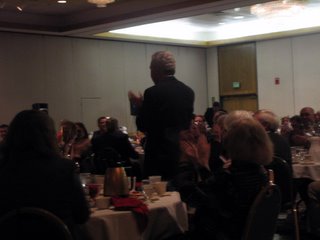 (AG Long, I got your back)
At the table in the back, I did enjoy the company of State Auditor Rich Sattgast and his wife Donna, as well as the Rik Drewes family, and Dennis from the Auditor's office. Also joining us for the meal was South Dakota Retailers Association Executive Director Shaun Lyons who is taking over for the retiring Jerry Wheeler.

As you might be able to make out from this blurry photo taken in bad light from the back of the room, Bob Sutton, emceed the event. 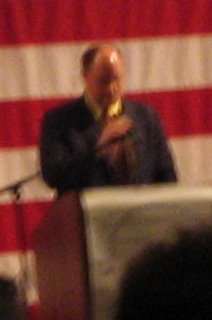 (That could be Bob)
Bob was reportedly overheard that he was going to get me back for his "Tom Jones" photo the other day, and managed to return the favor. Utilizing the luck of the Irish, I won a basket of goodies in the Cenkota raffle and when announced, Bob pointed me out as "Cindy Frederick's Favorite Blogger." (Ouch!) 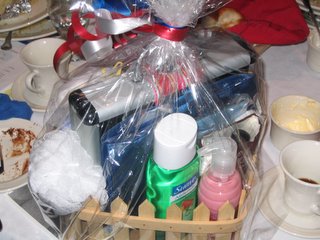 (PP wins girlie stuff)
While I might be a troublemaker blogger, at least I'll smell nice after my bubble bath and loofa.

One of the highlights of the evening was the recognition of the volunteers of the year for the District. Scott and Angela Olson from Hughes County, Ft. Pierre Mayor Sam Tidball, and former State Representative Lola Schreiber were all recognized for their contributions to the Republican Party. 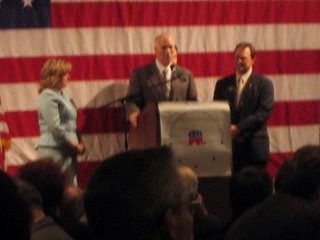 (Angela Olson, Scott Olson, and Rep. Tim Rounds in another blurry photo)
Governor Rounds gave the keynote address this evening and went over aspects of his 2010 initiative including Homestake, SD Certified Beef, and other points. I was also pleased to hear that he's including a mention of the South Dakota Vietnam War Memorial Dedication coming up this September. If you haven't made plans to attend, you should do so.

Lots of party people and officials at the event - almost too many to mention. State GOP Chair Randy Frederick conducted a live auction sale with the intent of raising over $3000 for the GOP. He billed it as one Republican Bake sale raising more than Ron Volesky could raise during his whole campaign.

Speaking as a 1989 Graduate of the World Wide College of Auctioneering in Mason City, Randy managed to get through it o.k. Although, he needs to work on his filler words. (They give you a better rhythm. I use a rapid "bid-em-at-a"...) OK, getting off track here...

As I was saying, lots of party people. Several legislators were there including the District 24 contingent. Senator Duenwald was there with his attorney daughter Katie (who has been known to read the SDWC). I also noticed Senator Tom Hansen from Huron sitting at the table in front of me.

I managed to have a couple of words with Senator Bob Gray, and talked at length with Representative Al Novstrup. I'll have to make a trip with the kids to one of his Thunder Road fun parks one of these days.

What else? I had the opportunity for a nice chat with State GOP Vice-Chair Elli Schwiesow who will be taking on Stan Adelstein in the June primary election in Rapid City. 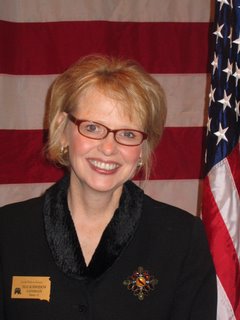 (Soon-to-be Senator Schwiesow)
Elli has always been more than gracious to myself, and my family, going back to when I first met her during my tenure as Pennington County E.D. So, in a month or so, I'm going to try to do something on the blog here to support her candidacy.

Anyway, those were the highlights from the District 24 GOP Lincoln Day Dinner 2006. I might try to make another one or two of them yet this year. Although, I think I'll try to improve on my camera work.

All you Republicans out there, don't forget to support the elephant this Election season!

Anonymous said…
PP -- don't be too hopped up on the Ellie Schwiesow bandwagon. She is devious, duplicitous, and downright dangerous. She is a wolf in sheep's clothing and you would be doing yourself a true disservice by doing anything in her favor. This is not to say that the little Ewok currently in the Senate is any better. Your powers (no pun intended) would be best served to find a good third candidate in District 32. Maybe we can find a good person like Sean Casey or Gary Brown to run and steer this Republican ship in the right direction. Speaking of Republican ships in District 32, the Titanic known as Tom Hennies will truly be sunk in four months. Go Kooiker!
10:21 AM

Anonymous said…
Elli Schwiesow is of the utmost on the character-meter. I don't know who in the world would describe her as Anon #1 did, but this person could not be any more wrong. She will make a great senator, and PP, don't be afraid to claim it from the highest mountain top.
1:34 PM

PP said…
I think I've already made my position clear on Elli.
1:36 PM

Anonymous said…
Anon #2 obviously hasn't had to pull one of Schwiesow's knives out of their back. This, in conjunction with her political prostitute of a son-in-law, would turn anyone against her. I would have to say that Anon #1 is not alone, (she did lose last time, right?). By the way, doesn't anyone else feel it is a little slimy for her to have an office in the Republican Party Headquarters in Rapid City and to use it to run her campaign? Not that it would matter, this Republican Party (state and county) are heading for a nice, November surprise. Let's start taking bets how many seats are lost in the House and Senate. Any bidders?
10:29 PM