Another candidate fundraising letter. This time, Tammy Weiss from District 15

By PP - August 25, 2006
Tammy Weiss, whose website I featured here a few days ago at http://www.votetammyweis.com, saw the feature I did on Frank Kloucek's fundraising letter, and offered her own letter up for abuse at the hands of the SDWC.

Before my fellow Republicans start giving me a hard time, as soon as it was mailed, the Dems had it too. So it's not like it's a secret. 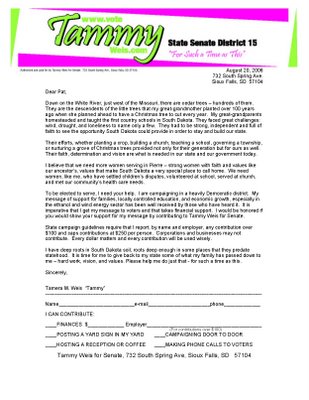 I have to say in comparison to Senator Frank Kloucek's letter this one is a breath of fresh air. It was very easily read. It has sentence and paragraph structure (and spaces between paragraphs, unlike Frank's). And it laid out a compelling argument why she needs to be in the legislature.

Yes, you see that phrase in most fundraising letters. Why? Because it works. People will donate a little better when prodded and given an amount in suggestion. And don't think you're offending them by asking for too much. In fact, some people are flattered by your thinking that they are higher rollers than they consider themselves.

What is it missing? Conventional wisdom on these things show that people like to donate to specific things. They liked to pay for your commercials or your signs. So give them that impression. "$250 will put my ad on television during the KDLT news" or something like that. That's probably the biggest thing I think it needed.

Otherwise, what else could have been added to help? A "PS" at the end quickly restating why the money is needed and the amount lets those who have little time cut through the meat of the text and get to the pitch, as opposed to reading a letter they may not have time for. If it takes too long for them to get through, it may end up in "file 13."

Overall, I'd give it a passing grade, and I'm sure it will do well for Tammy. Otherwise, if you're inclined to donate to her yourself, you can also click here for the contribution portion of her website.

Anonymous said…
The only thing I would change in this letter would be to add more neon colors. 2 is just not enough to really 'pop'.
8:53 AM

Anonymous said…
I have had (admittedly limited) personal contact with her through political stuff. I can say that she is an extremely unpleasant person, and not someone I'd ever vote for.

Too bad she didn't know I was one of her potential constituents. Guess I get to hold my nose and vote for Koetzle again.
12:21 PM

For that matter, if she thinks she can run in District 15 on a wind-energy and anti-abortion platform, she's crazy. I can't imagine how she walks through the neighborhoods of 15 and doesn't see the need for better jobs, better wages, and more access to higher ed/vocational training. Not mentioned even once. What a space cadet.
12:23 PM

Anonymous said…
Oh Anne,
I did know that you are one of my "potential" constituents. Still I had to endorse the person that I felt would be the best person for the office.

I am so sorry if you found me unpleasent when you called me. Maybe it was because you had misunderstood that I had made a personal endorsement and felt foolish about your mistake.

I have always been pleased and impressed with your financial support of Republican projects.

I'm not sure that one handshake and a phone call when you were upset because you didn't read something completely or correctly should translate to "extremely unpleasant."

That I am not someone that you would ever vote for is likely true but the converse is also true--I would likely not vote for you either--and didn't. I chose with a majority of other Republicans to vote for someone who more completely stands for Republican values and who will best do the job that he will be elected to do.

I am sorry that we don't see eye to eye and I am sorry if you found me unpleasant -- I look forward to our next meeting. I will greet you kindly and pleasantly whether we agree or not.
11:07 PM

Anonymous said…
The graphic design of this letter is one of the worst I've ever saw. It's like she asked her neighbors 13 year old daughter design it. Neon is a great color to use if you going after the under the age to vote vote.
4:49 AM

Anonymous said…
Anon 4:49, it's like you asked your neighbor's four year old to type your response response.
12:43 PM

Anonymous said…
Its like--- it made me laugh too
One of the best responses I have ever saw
10:16 PM