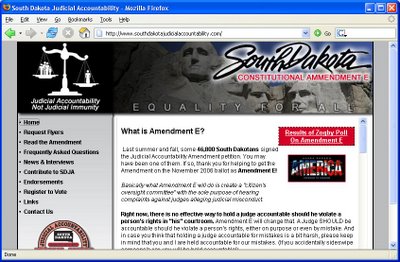 I was checking out the newly designed Judicial Accountability website (it's a matter of "know thine enemy") when I noticed that as part of their campaign activities they're sponsoring the nutty Aaron Russo conspiracy movie "America: From Freedom to Fascism."

It's being shown at the Ramkota Hotel and Conference Center on Friday October 27 and Saturday October 28th at $12 a head. 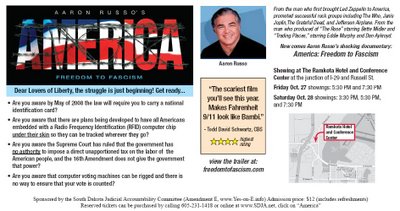 (click on the images to enlarge them) What can I find about this movie? As one reviewer noted about it:

Fascism rails semi-coherently against bogeymen on the left and right, employing public-access production values and a world-changing sense of purpose wildly disproportionate to its paltry resources and amateurish direction. The film somehow manages the formidable task of being far more paranoid and hysterical than even its screaming tabloid-headline title would suggest.

Wow! That sounds like a can't miss! And check out what another reviewer points out:

Russo also warns his audience of what he calls the dangers of RFID--miniature chips with antennas a few inches long that are being used to track pallets of goods in warehouses. Joining him is privacy activist Katherine Albrecht, who has co-authored a book that's described as outlining how RFID fulfills "biblical prophesies" in a way that's "uncannily similar to the prophecies of Revelation."

The problem, though, is that "America" never manages to do what a compelling documentary must accomplish: state a thesis and adequately defend it.

Oooo. RFID chips being the mark of the beast as prophesized in Revelations. Why have people on my side of the fence never thought of that to promote our candidates. Show a badly made conspiracy movie - At this point, JAIL must be thinking it's a guaranteed win!

Getting back to all seriousness - If you are thinking this ballot initiative might be a good idea, think again. These are the type of people behind the Judicial Accountability Act. I might be speaking in generalities, but it's plain to see that many of the people pushing this movement are paranoid, anti-government, tax-protesting, wild-eyed conspiracy theorists.

Look at the sponsor, "Two-star State Jailer in chief" Bill Stegmeier. He's on the hook to the State Department of Revenue for several thousand dollars because he didn't pay his sales taxes. his self-proclaimed best friend, Richard Simkanin, threatened to kill federal judges and drove around with a homemade identification card.

What else? it's documented that Bill thinks we blew up the world trade towers ourselves. One commenter on my blog has even noted that Bill allegedly filed suit against Tea to prevent the fluoridation of water.

Or as Bill himself put it in a "10 Questions" post I did some time ago:

(me) There have been some views connected with JAIL in the recent past that seem out of the mainstream from that of many South Dakotans. Why do you think that a significant number of the people vocally supporting JAIL seem to also believe that the New World Order is trying to take control, the federal income tax is unconstitutional, that 9-11 was a government plot, etc.?

(Bill) I would like to say my answer to that would be that many people who think we have a problem with the lack of judicial accountability also tend to be people who are concerned about not only the items you mentioned but possibly a lot more “out of the mainstream” concerns such the questions over the safety of vaccines, fluoridation, CIA involvement in drug running, who really wacked JFK, what really brought down Flight 800, etc.

I don't think I could illustrate it any more plainly.

These are the reasons I fight this so hard. It is not people looking for the best in our government. It is people at their worst trying to destroy a system of government which has flourished over the past 230 years.
JAIL

Anonymous said…
PP, the RFID "mark of the beast" concept is one that is popular with born again freaks that seem to be the mainstay of the republican party. Not too long ago there was a special on television concerning the rapture and the RFID was mentioned. One woman said she would rather have her children dead then "chipped" with a RFID. This just before she went to church. Better be careful, you don't want to alienate the bedrock of the party, or do you?
9:16 PM

Anonymous said…
Give me a break!

I am one of the BEDROCK of the party. I go to church--heck I even have questions about the safty of vaccinations--but I'm not voting for a group of 13 people to "oversee' our judges. We might get 13 like anon 9:16, since he/she would likely volunteer.
10:27 PM

Anonymous said…
$12, good grief! I don't pay that much to see a good movie. At that rate only true belivers will show up to watch. It might be kind of funny to stand outside the room and watch who shows up. Better yet feed their paranoia by taking photos as they go into the room.
10:57 PM

Anonymous said…
Too bad it isn't being shown at the drive-inn in Holabird.
11:21 PM

Anonymous said…
Yeah, they could show it on the side of a barn and if the cows in the pasture are curious enough to wander over at least there would be an audience. I'll fly over in my black helicopter to take the photos.

Charging people $12 to watch a glorified campaign commercial isn't going to help them win this election. If they were smart they would be buying time on local radio and running 30 second spots in an effort to reach a wider segment of the electorate. But charging to see this film guarantees the only people to hear or see the message will be their fellow true belivers.
7:29 AM

Anonymous said…
10:47, I agree you might be the bedrock of the party since you don't seem to be able to spell. Too much education is a bad thing for republicans, gets in the way of their cracker preacher's view of the world.
9:45 AM