By PP - February 28, 2007
I had to quit at halftime. Since I didn't bring a stadium seat, my rear-end was killing me. But tonight the annual House versus Senate Kids Voting Basketball game took place. And yes, I brought my camera.

This is the point where I advise pregnant women and those with weak constitutions to look away. 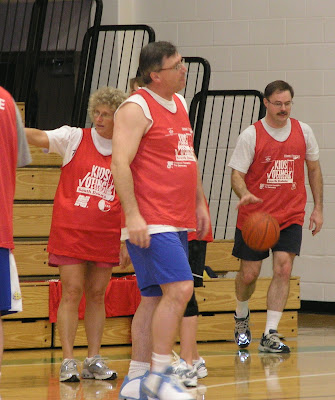 Reporter Bob Mercer warms up with the Senate team, and Chris Nelson dribbles... 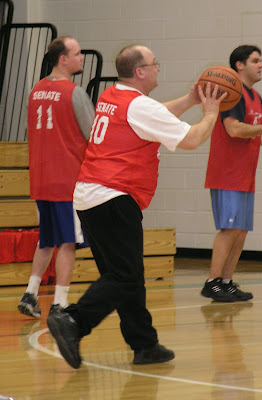 I'm not sure if that's an official uniform that Senator Frank Kloucek is wearing. But hey, maybe that's what all the fashionable basketball players wear down in Scotland, SD. 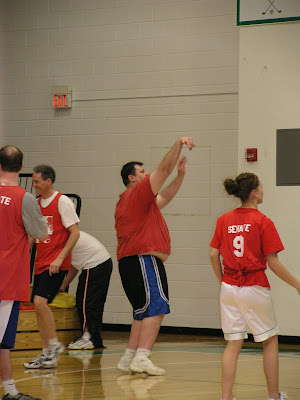 Speaking of Frank, this is probably one of the few times he's been on the same team as Brock "Sir Swish" Greenfield. I was going to razz Brock about his free throw ratio and compare it to his legislative ratio this year, but he warmed up his arm quickly.

Speaking of Brock, I think he fouled Larry Rhoden twice in the first 5 minutes of this game. 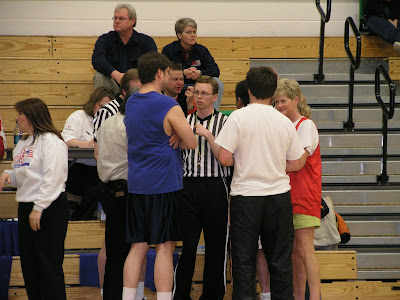 Here PUC Commissioner Dusty Johnson explains to Democrats Dan Ahlers and Sandy Jerstad how the Public Utilities Commission will now be regulating basketball, and producing entertaining commercials about it. 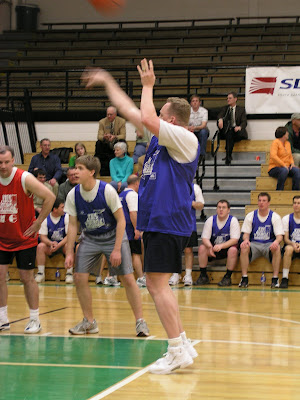 AFP Lobbyist Duane Sand came down from North Dakota for this game, as he attempts a free throw. 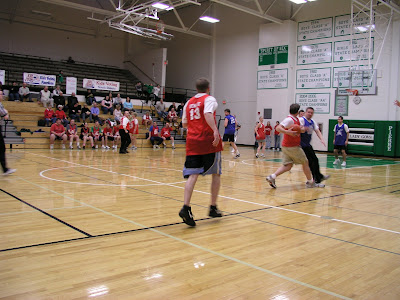 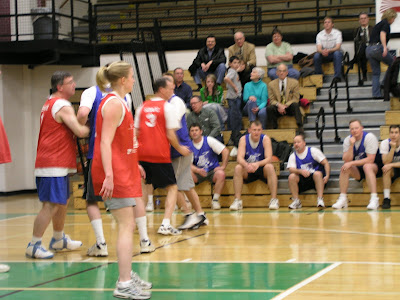 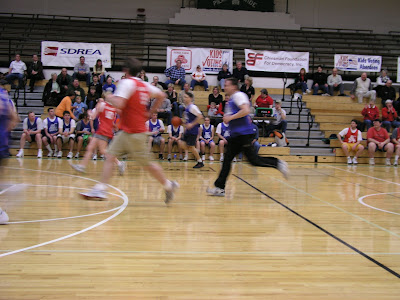 And a few game action shots.... 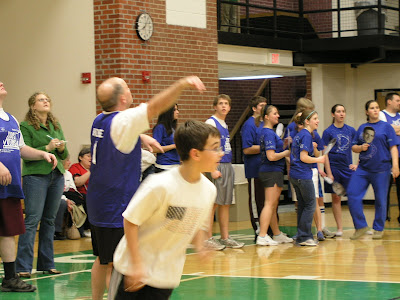 At halftime, you see Representative Val Rausch assisting the kids during the halftime shootout. That was about the time I left. Unfortunately, I was losing my batteries, so I wasn't able to get you a shot of Tom Katus' funky gym shorts.

Tonight's event was sponsored in part by the SDREA, Citibank, and the Chiesman Foundation, among others. Kids Voting is a wonderful program teaching our State's youth about their civic duty to vote. I'd strongly encourage you to support the program by sending a donation here, or by contacting them to see what else you can do to help:

And if anyone has any other choice shots of the game, e-mail them to me here at dakotawarcollege@yahoo.com, and I'll get them posted.

Anonymous said…
I have to disagree with you on the value of this Kids Voting Program. Having had children involved in this, my experience is that it only teaches kids to vote, but not to get the facts or to consider what is propaganda or not.

We do not need any more uninformed citizens voting just because they were programmed into it in grade school.

When someone comes up with a program that teaches the kids to think for themselves and consider both sides of an issue, and find out the facts before they vote, I will wholeheartedly support it.

Anonymous said…
My thoughts: Looks like a standing-room-only crowd! Is that Val Rausch sitting on the bench picking his seat? and... I hope Diana Miller didn't ref again! Thank God I don't see her in the photos.
9:28 PM

Anonymous said…
This is a bogus criticism. In essence, everything is propaganda in a campaign. And propaganda, while biased, can have a factual basis. So who decides what is propaganda and fact? If kids are taught to vote in this program, that is a first step. They can be taught to do their own research, just like the grown-ups.
9:35 PM

Anonymous said…
I head frank wore his sweats today with his suit coat. TELL ME SOMEONE GOT A PICTURE...
10:48 PM

Anonymous said…
mercer seems to have several acute varix. He should see his doctor. A little sun wouldn't hurt either.
11:22 PM

Anonymous said…
I support the program. Maybe the first posters kids didn't get the full story from his kids on "Kids Voting"????
Support the program please and by the way I am not involved in this program so this is not a inside pitch.
I also shake my head at the last paragraph of the first posters statement. As for a program; parents and family memebers can play an active roll of civic duties by talking with their kids about issues and duties you know.
7:35 AM

Anonymous said…
I LOVED the photos and your support of Kids Voting. I was very surprised at the first comment. Obviously those kids didn't get the full picture of Kids Voting. One of our most important missions of Kids Voting is to teach the kids the importance of becoming INFORMED voters. I have had parents find me while I was shopping just to tell me they had to look up issues and the pros and cons so they could discuss them with their kids. This program works. Take a look at the cartoon in the Lead newspaper one year that showed a student explaining issues to a parent. Students do study the candidates and the issues. We have former Kids Voting students in Sen. Thune, Sen. Johnson and Rep. Herseth's office. They told me personally that Kids Voting made a difference.
Patty Pearson
Past Kids Voting director
Pierre SD
8:57 AM

Anonymous said…
I'm willing to bet that the first comment is somehow linked to the fight over HB1215. (Remember that?) He/she is probably upset that the kids were encouraged to find out about both sides rather than just one that coincides with his/her opinion. Just a guess. I have a niece was in Kids Voting and she made the effort to study issues. Sounds like the first poster's kids didn't make that effort and he/she is blaming the program.
10:45 AM

Anonymous said…
For those who are perfect please step forward???
No this is not Brock...

Anonymous said…
From the looks of these guys they are lucky that nobody need a defib!
7:18 PM

Anonymous said…
Nobody needed defib, but Kristi Noem needed stiches after she caught a Rhoden elbow above the eye!!

Anonymous said…
It's about time the House won. If that's how Rhoden treats his teammates,what did he do to the Senate?
11:39 PM

Anonymous said…
He tried to shift his property taxes on em!
11:54 PM