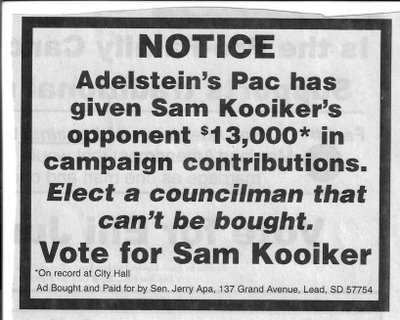 Senator Jerry Apa paid for an ad in today's Rapid City Journal in favor of Sam Kookier. And it just happens to just blast Senator Stan Adelstein and (while unnamed) Representative Tom Hennies who is running for the City Council.

"Elect a councilman that can't be bought." Not mincing words there, is he?

Anonymous said…
Jerry Apa ran out of letters to the editor so now he's taking out adds??? GO JERRY...hahahahaha

Anonymous said…
Vote Kooiker, OUR future. Not someones past.
11:03 PM