Schoenbeck beaten about the head by Mercer over the Dan Sutton Allegations. But is it really deserved? I don't think so

By PP - October 23, 2006
I had a few of my readers call or drop me a note on this weekend's/today's Bob Mercer column which intimated that there were political motivations behind the allegations of impropriety against State Senator Dan Sutton.

And I feel more than a bit guilty about it, because the whole thing pretty much broke loose after I first reported on it. I tried to be careful about it, and report the facts as I could best confirm it.

I first got a whiff of the story via a phonecall (not a legislator) about a letter that had been allegedly issued to a senator regarding a violation of rules. So I followed up on it. What details did I hear about it from Lee? Nothing.

I asked him for the letter, or at the very least what was in it. And I was very matter of factly informed that at that point, it would be inappropriate for him to provide me a copy of the letter, or to disclose it's contents. (Heck, I still don't have it.) And my pursuit continued from there where I queried a Democratic leaning contact if they were in possession of the letter. Their response? They asked me "which one?" That was the tipping point that sent me into hot pursuit.

My point? If Lee wanted to make it political, he had ample opportunity to do so when I first asked about it. He could have given me a copy, alluded to it's contents, etc. But he didn't. It was only after it exploded in the media, and details became public knowledge that he would confirm that there was a matter being investigated.

This isn't just the case on the GOP side of the aisle. Giving credit where credit is due, I would also note that Garry Moore has been equally a reluctant participant, choosing to only confirm scant details of the investigation to the media. Only after the contents of his letter were published, did he make more information forthcoming on the Sutton allegations.

Since the Argus Leader went ahead and disclosed what's in it, I suppose I can put it out there for all to see. 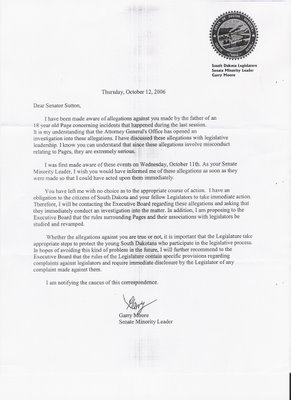 (Click on the letter to enlarge)
Much is being made ado about Lee Schoenbeck's supposed assertion in his letter to Sutton (as far as I'm told) that he either needed to resign or it would proceed to a special session. The thing to consider here is that's not so much a threat as a matter of fact statement of what the procedure is in the case of an allegation of a senator violating Senate rules.

In this case, Sutton has decided to not resign. Which means that the Senate must either drop it, or proceed with a hearing. And dropping an allegation of this kind of impropriety isn't going to happen.

Continuing further, as far as I know, there's no statutory provision for a select committee to hear the matter and investigate, or for the exec board to hear it. In fact, just tonight at Argus Leader.com the exec board themselves confirmed that fact (which isn't there any more BTW). The Senate would have to meet in full and change rules just to allow for it.

I think that both Schoenbeck and Moore have been, and are approaching this with more than a bit of trepidation. This talk of a special session is not being talked about lightly, because this is going to be unlike anything the state of South Dakota has ever seen. These gentlemen have been anticipating being on their way out of the Senate. Now they're being dragged back in for this mess.

This will not be fun duty. This will be a painful exclamation point at the twilight of their senate terms.

Think of a rape trial with lurid sexual details and questioning. Now, take the prosecutor and multiply it times 50 - because that's how many people will probably have the ability to ask questions and deliberate on the floor.

After session every year, there's often talk about a legislature accomplishing nothing. Now, they're being called into session for the sole task of hearing allegations of sexual impropriety committed by one of their members against one of their high school aged employees (allegedly). This process is fraught with danger. This proceeding has a strong potential to set a new low in public opinion how people feel about their legislators.

Legislators themselves are unsure how to proceed. Going back to ArgusLeader.com tonight, Executive board Chairman Ed Olson talks about that uncertainty:

"I don'’t think we'’ve been through anything like this in the state'’s history,"” said state Sen. Ed Olson, a Republican from Mitchell.

The request was delivered to the governor'’s office on Friday, according to Mark Johnston, a spokesman for the governor.

Olson, who is the chief operating officer of the Legislature when it'’s not in session, said the idea is to have only the state Senate called into the session because the House isn't involved.

Olson said he will request the session be closed to protect the privacy of witnesses.

"“There'’s no way in heck I would ever condone deposing an 18-year-old kid” in public," he said.

Rounds plans to meet Tuesday with South Dakota Attorney General Larry Long to discuss details of such a session.

Read that all here. Despite the fact that Ed is noting that "he will request the session be closed," here's my prediction: It just flat out isn't going to happen.

Why? For starters, I don't think it can be done politically. Everyone in South Dakota knows about it, and the population will not tolerate it's legislators a matter against one of it's members in private. In an era when people are campaigning on opening up government, they will not tolerate this being closed.

Secondly, what a difference a year makes. Ed might say "There'’s no way in heck I would ever condone deposing an 18-year-old kid." But he's kind of wrong. The accused is legally an adult, not a juvenile. If he were seventeen, it would be different. But he's 18.

Third and equally as important, this is not an accusation of a member getting a DUI or something - this is a matter of a Senator allegedly violating a rule - the alleged sexual harassment of an employee of the Senate during a period of time when he's supposed to be on the job doing the people's business.

If the state's media even suspects that the legislature is going to close proceedings like Ed is suggesting, I anticipate we're going to see the lawsuits against the state senate fly.

The special session to discuss the allegations has been pegged to be right around November 27th. Despite Ed's predictions, I think it's going to have to be an open process. And all of South Dakota will be set for a front row seat.

Anonymous said…
I think Lee and Gary have both handled themselves very well.

But having said that, Lee has been nothing but prudent in his conduct. Probably because he knows that trying to benefit politically from this would be, well, politically stupid.

And I agree with Ed Olson too - they should do this in closed session. But PP's right - there is no way that will actually happen. As in all open government questions, the Argus Leader's desire for news will outweigh the interest in good government.
9:17 PM

Anonymous said…
Sen. Moore's letter makes it clear that he supports an investigation by the Exec Comm. I would assume Sen. Schoenbeck would support as well. For the sake of expediting and avoiding a circus why would the two leaders and the Exec Branch not get the investigation started without a special session?
9:59 PM

PP said…
Anon - because they can't. Neither State law, nor Senate rules provide the exec board that authority.

Anonymous said…
Wouldn't it be better for Sutton to just resign and spare himself, the victim, and the state all the embarrassment this is going to entail? As some have said, even if proven innocent, his career is probably over as this type of stuff doesn't disappear in people's minds. And I can't figure out why the page would lie when his family and Sutton's are evidently friends and the page will be dragged through the muck of this also.
11:15 PM

Anonymous said…
Senator Sutton maintains his innocense. I don't know what happened, but if he believes he is innocent, I don't blame him for refusing to resign.

Having said that, if Dan loses reelection, I would hope he would resign. His time as a legislator would be functionally over anyway, so why drag everyone to Pierre for what is sure to be an embarrassing, if not incriminating, day?

He could just say, "I maintain my innocence, but I am going to spare the Senate and the State from having to go through this process needlessly."

The governor could simply appoint John Toates to the seat early, and we could move on.


Obviously, if Sutton is somehow reelected, it would be a different question. He may even need to resign or be expelled TWICE - once before January and once after.
11:19 PM

Anonymous said…
Shinbeck took down Sahr and now he's working on Sutton. This guy is nasty.
7:47 AM

Anonymous said…
Lee is our moral compass. Could this have been handled differently? Don't know. If Sutton was going to fight maybe not. But Lee's involvement still creates a smell.

Remember, it was Lee calling around on the Sahr matter, repeating incorrect information, rallying people to push Sahr out. His stated reason, to protect the party. His real motivation, to help himself both by taking someone out and to be seen as the parties moral compass.

If Lee was smart AND wise, he would have kept his name out of this story. If there was a way to do it, Lee should have. This is all negative, no positive, and for a run at state wide office Lee is going to start out w/a whole lot of negative.
8:15 AM

Anonymous said…
Lee does not = moral compass.
Lee does what is good for Lee
8:28 AM