By PP - February 27, 2006
I had good intentions of going up to the YMCA tonight to climb back on the horse of exercising.

That is, until my brand new .MP3 player decided it didn't want to work. I should have known there was a reason Lewis Drug marked these things down to $39.95 from $100. Ugh. After fighting with it unsuccessfully for 2 hours, I decided to give it all up for the evening and do computer work.

I'm not in much of a mood to post this evening, so I'm going to phone it in. But, it's a milestone for me worth noting. I managed to hit 7000 page visitors this month. (That's over 13,500 hits). I've managed to hit an all time high for my blog. Last June, I was at fewer than 500, so this is a pretty good jump for me. And the best part is that it shows no sign of slowing down.

To commemerate, I'm in the process of designing a new SDWC t-Shirt.

I've got it mostly done. It's a GOP elephant rearing back and trumpeting. The top says South Dakota War College. And you can see what I have for the bottom. 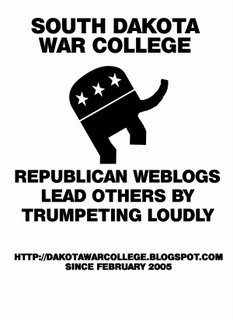 The bad part is, I hate the bottom. It stinks. I must have writers block, because I'm usually more clever than that. The alternative text I thought of would simply be the top again saying South Dakota War College, with the bottom saying "Republican as Hell." But I'm not sure if that does it for me, either.

Any GOP Blog Readers out there have anything better? If so, let me know. In the meantime, I'm going back to do battle with my computer.

Douglas said…
Looks more like a turtle than an elephant. Republican elephants also should always be completely white.

You can do better. Maybe an elephant riding in the back of a pickup truck on top of a pile of 4x8 signs holding one sign up with trunk and a template of it hanging on its tail.

But, what we in SD blogging all really need is a mention in one of the big national blogs. More hits in a single day than usual for a week or two.

Off course, maybe we could run a poll on which of us has the best blog. Praire Progressive got downright right sanctimonious about that.

Oh, and being a libertarian, Newland knows all about hell.

Unknown said…
Hell is being libertarian in a state where Democrats act like Republicans and Republicans rally behind a basketball-star fop who can barely spell his own name.
10:40 AM