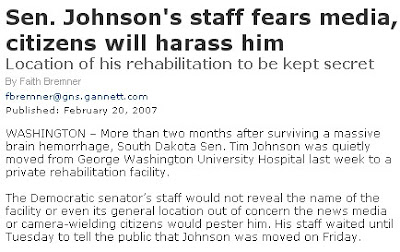 I clipped this one off of the Argus website because that's easily the most lurid headline I've seen on this story. And of more concern, why is Senator Johnson's staff coming off as a little paranoid about this?

Except for shortly after the story broke, it's not like there were throngs of people waiting outside of his hospital room trying to get a photo of him like he was Anna Nicole Smith or something. Although, spokeswoman Julianne Fischer might disagree:

“When he first went into the hospital, there were cameras camped outside our office in D.C. and two of the three offices in the state and outside of the hospital for days on end,” Johnson’s spokeswoman Julianne Fisher said. “It was very intense.

“The family is trying to release as much information as they can, but they want him to focus on getting better and not feel self-conscious.”

Although that speculation has ceased and it now seems apparent that Johnson could serve out the remaining two years of his term, interest by the national news media in his recovery is still running high, Fisher said.

Read all of the story here.

What say the reader? Simply seeking shelter from the media? Or something else?
Tim Johnson

Anonymous said…
Perhaps they are being guarded about this because at the time he initially fell ill, he was barely out of the ambulance when the National Media was speculating on who might fill his seat and how the balance of power in the Senate would shift if he were unable to continue his term.

I have to assume he's still at least somewhat frail, and any photos snapped which would show him as any less than in perfect health could start the speculation all over again. At this point none of us needs that, especially Johnson and his family.
9:40 AM

Anonymous said…
I think Tim and his family deserve a degree of privacy as he recovers. It's emotionally devestating to deal with your husband or father going through an ordeal like this, and there is simply no need for them to have to watch the idiot pundits on the cable news channels speculating the political ramifications of his reactions to each days physical therapy. Tim needs to get healthy, and having to deal with TV cameras and photographers is an impediment to that.

If it were your spouse, parent or child, you'd want nothing less.

The worst part about it is there is no actual news value in having pictures published other than the lurid tabloid journalism that plays to the worst instincts of people. We know Tim is not well, that he's recovering, and that it will take time. Having the media circus involved in the recovery serves no legitimate purpose.

Get well, Tim. We're praying for you and your family out here.
9:53 AM

Anonymous said…
I heard from a friend who works in Washington that two reporters were caught pretending to be flower delivery people to try to get past security at the hospital the day after he was taken to the hospital. They said that Tim's family was harassed whenever they left the hospital by reporters, and that the reporters had every exit covered. These guys aren't like South Dakota reporters. They see people as "stories" not as humans.
9:56 AM

Anonymous said…
9:53 am You are right on!
As you all know I am a Republican. Too bad the media can't use common sense, leave Senator Johnson and his Family alone, let him get healed up. There will be plenty of time to get the story!
4:36 PM

Anonymous said…
I'm surprised that "citizens" is included with "media." Doesn't seem to me like the citizens are the people to fear.
5:07 PM

Anonymous said…
We all hope for Sen. Johnson to recover and go back to work, but the question that no one wants to ask. How functional is he?

If he is making good progress, great, but trust the citizens of South Dakota and quit keeping us in the dark.

I for one would like to know a best guess of when and if the Senator is going to be able to go back to work.

If the answer is not for a long time, let us know, I don't know of anyone calling for him to step down, but his staff is determined to play games by putting out stories like he has hired a campaign manager for his re-election.

Has Sen. Johnson recovered enough to even make that call, or is it just his staff trying to deflect questions about his recovery?

Anonymous said…
I agree that Senator Johnson should not be harassed, nor his family, but a hand full of reporters should be allowed, maybe on a weekly basis, to see the senator in a controled enviroment.

That shouldn't be hard on him and the public can be kept informed on his proogress.
10:48 PM

Anonymous said…
I'm with anon 5:58. I hope that Johnson recovers. But since he is hired by us South Dakotans to work for us, if he will be unable to fulfill his duties in the next two years, we deserve to know that.

But in all honesty, this is politics. If he were in all probability unable to return to work in the next two years, the Dems will never let us know that because it would jeapordize their slim majority in the Senate. And if you think that Pelosi is going to let this happen, think again.

The stories that Johnson has hired campaign staff and he has been doing work from his hospital bed and has cosponsored a bill is just spin, and I think most people see through that.
12:13 AM

Anonymous said…
"And if you think that Pelosi is going to let this happen, think again."