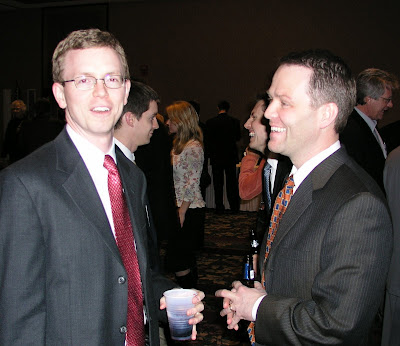 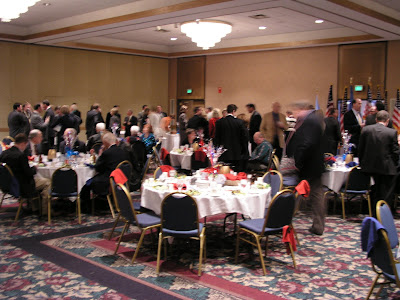 After the county honored Don Rounds, as the Hughes County volunteer of the year, Matt Michels, the speaker of the night got up and gave a speech about liberty and Republican values. 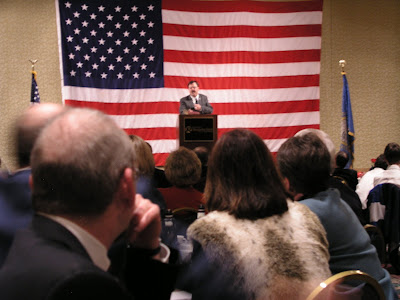 He also had us on the edge our seats with this one. (mp3 file)

I was fortunate to sit at a table with longtime lobbyist *the* Jeremiah Murphy. He introduced himself, as did I. And upon hearing my name he apologized, as he noted "I should have introduced myself as anonymous." (good one.) 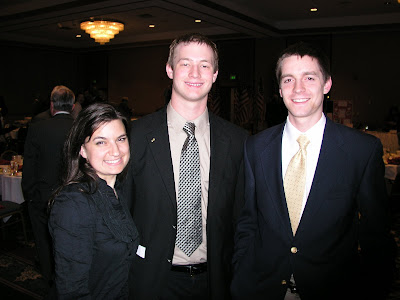 I'll have more on the Michels speech as I get through it (probably early next week) and reduce the file size.

But let it be said that a good time was had by all.
GOP Stuff

Anonymous said…
Everyone should listen to the snipet by Michels, it's a good one, he hasn't lost his sense of humor.
7:15 AM

Anonymous said…
A good lobbyist brown-noses everyone. And I see Sen."where did he come from" Gray is still ass kissing everyone in the administration.
7:49 AM

Anonymous said…
Michels is a good man and would be an excellent governor for South Dakota. I hope he continues to get out there.
8:04 AM

Anonymous said…
With Daugaard and Michels, GOP has an embarrassment of riches for 2010. Two solid, well-respected, smart guys. Come to think of it - that would be a hell of a ticket.
8:13 AM

Anonymous said…
I have known Matt Michels for years and he would be a great candidate for any office, but the State of South Dakota would be blessed to have him in the Governor's office in 2011. As people begin to look at candidates, he has a background that will grab attention and I hope he is the next Governor. Interestingly, Yankton isn't overly politically active, but if Matt is the GOP candidate in 2010, three out of four elections will have had a Yanktonian in the Gubernatorial race.
11:20 AM

Anonymous said…
Jeremiah D and Jeremiah M are both as republican as you can get.
2:19 PM

Anonymous said…
How much did we pay Dave Owen and Bob Miller to MC the event. It was to much....
2:33 PM

Anonymous said…
Matt Michels would be a great Governor. We could use a class act like him in the Mansion. He is smart and has a really diverse background which would lend him to leading this great State of South Dakota. Go Matt!!!!!!!!!!
7:41 PM

stop posting about yourself.
9:44 PM

Anonymous said…
You are just so jealous of Matt. Get real. Tell me who would be better. I bet you can't name a better candidate.
9:52 PM

Anonymous said…
There is nothing negative of this string about Matt Michels, does anyone know if Lee Schoenbeck is on vacation?
7:29 AM