Some of the results are ...curious

By PP - May 07, 2007
Results from the two polls I posted are coming in, and are interesting to say the least.

In the congressional wish-list contest, it looks like the readers are after a certain ideal. Because Larry Russell and Dusty Johnson are neck in neck. Seriously guys, I'm not fiddling with the numbers or anything. This is what's coming in.

(BTW - The results are recorded on an IP address basis, and not a computer cookie basis, so it's tougher to fudge. I know, I tried to vote twice with 2 computers on the same network. It wouldn't work.)

Even laying relatively low in the GOP political world for the past couple of years, Larry still has a remarkably loyal following among the grassroots.

The Dems for Governor results were also interesting. Yes, Heidepreim is running away with it. But it's the also-rans who are getting my attention. BJ and Frank are being picked more often (ar at least about the same) as Congresswoman Herseth Sandlin. 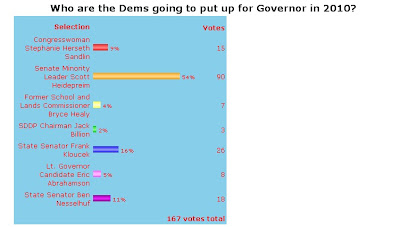 Anonymous said…
Larry Russel would have a hard time being elected dogcatcher. Hisw electability would be right up there with Dale Bell. The dems would really like that.
8:28 PM

Anonymous said…
PP, who gives a flying one what you think, dude. What does Mrs. PP think?
8:32 PM

Anonymous said…
This probably proves, more than anything, that the Argus polls are utterly bunk, just like every other poll on the internet.
8:52 PM

Anonymous said…
Poster 8:50p
If your comment was directed at poster 8:47p well this is not Joel and I stand with the no on L. Russell.
Try again
11:02 PM

Anonymous said…
If Rosenthal doesn't like Russell, then I think I'm going with Russell!
11:28 PM

Anonymous said…
No one is voting for Herseth for gov; they want her in the Senate instead.
8:22 AM

Anonymous said…
A congressional candidate that can beat Stephanie should be bright, articulate and inspiring. It wouldn't hurt if he/she would also be young and energetic. Larry Russell is exactly what we need.

The democrats fear him the most. (That may account for some of the previous posts.) They know he can motivate thousands of supporters much like John Thune.

Watch and see. The Dems will conduct an all-out assault on Russell hoping they can knock him down before he can even announce his candidacy.
8:36 AM

Anonymous said…
Let Larry run against Stephanie. Once he gets pounded, maybe we can be rid of him once and for all.
9:28 AM

Anonymous said…
I am a Republican and there is no way i will or would for for Russell. No kidding!!!
9:52 AM

Anonymous said…
There are so many in the "GOP Old guard" Who are intimated by Larry Russell.... He knows how to motivate, organize and get people excited, he is young, vibrant & bright!! We need a canidate like Larry Russell !! He's got the support of the GOP grassroots movement in SD-- Everyone knows those are the folks who turn out the vote!!
10:50 AM

Anonymous said…
Poster 10:50a
I am not intimated by Russell, and I am not the "old guard", as you state. I plain don't trust or care much for him.
If he is so good at organizing then he should do just that but, then he has a history that is not so good.
He also comes off fake and phony. I don't trust him.
As a proud GOP I just can not put my support behind him.I don't want to choose a lesser of two evils.
No that he is evil but you get my point.
11:29 AM

Anonymous said…
That was supposed to read "not that he is evil"
sorry,
11:32 AM

Anonymous said…
Why on earth would we put up a challenger whose only claim to fame is getting busted for breaking campaign laws? Whether or not it's fair or not, the press will write about him as "a former Republican organizer caught up in a voter fraud scandal." They're not going to cut any slack to a young conservative. Even if he were as articulate as Thune or Rounds, he'd have a very tough time overcoming the "voter fraud" label. Life isn't fair, but elections are held in reality.
11:36 AM

Anonymous said…
Lots of dems voting in the poll for russell because he's the weakest link. Put him up as the nominee, GOP. Most think Congress is already too ethically challenged. He'll top out a right around Bruce Whalen, give or take 2 points.
11:53 AM

Anonymous said…
8:36 a.m. - Herseth meets the requirements in your first paragraph yet she votes with Pelosi to destroy the country.

Although South Dakota is full of charm let's not be tricked into avoiding sensibility (or patriotism).

9:52 a.m. - I don't have a problem with you voting for a candidate other than Russell in the Primary but in the General if you abandon him (provided he makes it) you are no Republican. The alternative is more of Pelosi and Reid!

This poll doesn't mean anything. The Republican picks are based on "electability", which is how Diedrich was selected over a field of rather impressive qualifications several years ago. Russell came in second to Diedrich while having a thimble full of experience compared to Hunt's swimming pool.

It is already pointed out; why skew the other survey by adding Herseth when everyone expects her to run for Senate.

Anonymous said…
My experiences with Joel Dykstra indicate that he is more interested in listening to himself talk than to hear what his constituents have to say. This guy is incredibly arrogant!
1:50 PM

Anonymous said…
On a good day he is incredibly arrogant, on a bad day he is a weasal. PP, this guy has worn through nearly every member of the GOP in Pierre except you, why? Is it because neither of you have a job now (harsh, I know-wish you the best in Brookings, a move you needed to make, really just a dig on Joel.)
2:20 PM

Anonymous said…
12:10,
To be blunt HELL NO i would NOT vote for Herseth.
I would not vote for Russell either! I am also not alone in this opinion.
Like i said I am a proud Republican and I hope he stays out of the race!!!!!
There have been so many up and comers in the party. Part of the problem is they didn't.don't get spot lighted!
3:11 PM

Anonymous said…
12:10
I would said that Diedrich had more experience that you are giving him credit.
There were some negatives with each candidate as there always is.
Thune is the reason Russell had a leg up in the base or should I say grassroots.
That doesn't make him the best choice.
To much baggage!
4:28 PM

Anonymous said…
PP - the question about the Dems governor choices wasn's who SHOULD run, but rather "who are the dems going to put up for governor in 2010"

That doesn't mean that Herseth wouldn't be the best candidate, but rather few people think the Dems will put her up in 2010.

And I'm sure every one of those Kloucek votes are Republicans.

Anonymous said…
Ole Frank just wants to save the world and every cause.
8:38 PM

Anonymous said…
Would someone like to point out exactly what Russell did during the 2004 race to deserve what he got? I have never heard or read of ANYTHING specific. The Senate race needed to get the "registration controversy" behind them so they chopped off some heads, including his.

If I recall right, it was not Russell who garnered the headlines for messing up, but it was Russell who got the ax. Of course he will need to address this issue but I am confident that he can and will.

Russell is a good guy and would make a great candidate. His detractors should put up some evidence that he actually did something wrong or..... apologize.
8:38 AM

Anonymous said…
Joan, you're absolutely right. Dykstra doesn't seem to care what the people in his district think.

I attended a legislative coffee house with the District 16 legislators. At the meeting was the school superintendent, school board members and many parents. They all talked about how bad one-time money is and how schools can't use it for ongoing expenses like teacher salaries.

Dykstra doesn't seem to care about what the people of this state want. I fear the day when he might be elected to a higher office.
5:17 PM

Anonymous said…
8:38 AM
"Would someone like to point out exactly what Russell did during the 2004 race to deserve what he got? I have never heard or read of ANYTHING specific."

Anonymous said…
What are the final totals on this poll?
11:44 PM