Aberdeen American News has the Schoenbeck letter to Sutton

But, just to whet your appetite, here's a a couple of snippets as printed in the paper from the letter that Senate President Pro Tempore Lee Schoenbeck sent to Senator Dan Sutton notifying him of the accusations where he allegedly "sexually groped the young man.": 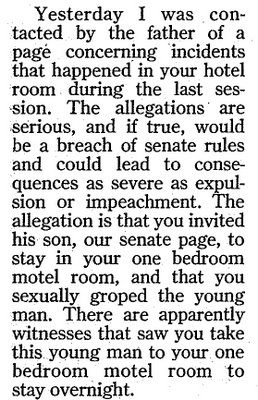 And later in the letter, it sets forth pretty clearly what the actions are that the senate does and does not have the ability to take - which I think it of the utmost importance to note in this case. 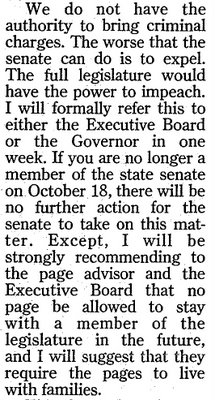 The thing to keep in mind which I think has been lost on much (all) of the media coverage, is that this is solely a determination as to whether or not Senator Dan Sutton violated Senate rules.

This is not a hearing to determine if he violated criminal statutes. That's an entirely different process with (what I would argue is) a much stronger burden of proof.

I'm not sure what the legal standards are for hearing of this nature, but they could find him guilty of a violation of senate rules simply based on a preponderance of evidence. Or, it might just be based on a vote of his peers.

But, this letter also notes to "impeach" Sutton, a meeting of the full legislature is required. So, we might see a rather relaxed House of Representatives awaiting whether or not they're even needed.

After all of this process, there's the question of what will happen next January if Sutton wins re-election. If he's found guilty of the accusations, there might be more to do about it if the Senate refuses to seat him.

But, let's get through the first things first.

Anonymous said…
I sincerely hope that, if he is not reelected, Dan Sutton simply resigns. He could continue to maintain his innocence while saving himself, the page, and the Senate from the spectacle of a special session. There would be no good reason to "stick to your guns" by fighting to retain his seat - when his service is practically over anyway.

Of course, if Dan is reelected, it is an entirely different story. I don't know if the Senate would have to expel him AGAIN (assuming he was expelled the first time), if it would refuse to seat him and declare the seat vacant, or if it would reason that "the voters knew what they were getting" and welcome him back. It's just hard to say.
9:39 PM

Anonymous said…
Well anon, I guess the 1st thing about your comment that boggles me is that people like you just assume that since this allegation is in the news that it did happen and that even if he is innocent he should resign and act like he is guilty. Well then all I have to say to that is that you know nothing. I am very close to this situation and I know exactly what the story is and what the allegations against Dan are. I know with all certainty that Senator Sutton is innocent. The motive behind these allegations is political and nothing else. Mr. Wiese had been blackmailing Dan about bringing this out to the public 8 months ago when they both were considering the whether to seek the Democratic bid for govenor. Mr. Sutton did nothing wrong, the alleged page, was a family friend who Dan treated like a brother. Also Dan's job is his life, and he would do nothing to jepordize that and I mean nothing. As for him resinging his seat, Dan shouldn't because he is innocent. He did nothing to break senate code/rules. The page didn't have to stay in Sutton's room, but did so (with his parent's blessing) to save money. When this is all said and done, Mr. Sutton should have his seat back and wiil be proven innocent when all is said and done.
2:24 PM

Anonymous said…
The fact that the page was sharing a motel room with Sen. Sutton through an arrangment with his parents, and the fact that Sutton and Dennis Wiese who were collaborators in the beef plant project in Flandreau are, of course, dismissed as irrelevant because such information emphasizes the absence of even the most casual and cursory checking in getting a context for this story. The beef plant project collapsed and Dan Sutton is involved in trying to recover some money--to the tune of $850,000--that people in Flandreau would like to have back. The two men are now adversaries. Of course, that is irrelevant.
david Newquist wrote this on his blog site thought it was interesting!!!!
5:22 PM

Anonymous said…
I am also very close to this situation and i know the true story...which is DAN SUTTON IS GUILTY. He knows it as well as everyone else. To me it seems that the parents trusted Dan enough to let their son stay with them. Trusting he would not hurt him. It is very obvious that if the son leaves the place feeling extremely uncomfortable considering the friendship him and Dan have had then Dan did something very wrong and with this special session that is supposedly going to happen the truth will come out.
2:30 PM