A note from Benedict Ar... Sorry. A note from Stan Adelstein why he thinks you should vote Democrat this year. 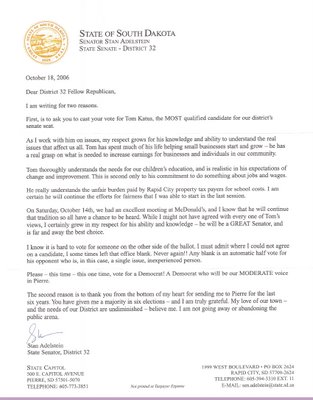 (Click on letter to enlarge)
And while it may not be printed at taxpayer expense, I don't see a disclaimer, either.

When they hold the special session (supposedly at the end of November) , since he's left them already, I think his colleagues should expel him from the caucus.

Sure. At that point it's only going to be symbolic. But since he's already said he's running again in the near future, sometimes symbolism is enough.
Adelstein

Anonymous said…
Wow, this is a first. A Republican senator using his official stationery (by virtue of his REPUBLICAN senator status) to send out a request for the voters to vote Democrat. He has a right to do this, but I really think to use official stationery is wrong. This is his personal opinion, not the opinion of the Republican party. And is he even considered a senator yet as he lost the primary and won't be returning to Pierre in January? In which case is it even legal?
5:45 PM

Heard of a "tipping points".

It's happening kids, we are going back to a real two-party state in Pierre.

It's a good thing.

Anonymous said…
There is no "official stationery". Stan purchased this stationery himself, and he has the same free speech rights as anyone else last I checked.

Stan & Ellie really don't like each other. Just PP continuing to hammer on something that everybody is aware of already. Nothing new here.
6:16 PM

Anonymous said…
I still say using this stationery is wrong because it is perceived to be official state issue. If he wants to endorse The Cat in the Tat, I don't care, but it shouldn't be on what people will think is official stationery and it shouldn't have a state seal or such on it. It's his PERSONAL opinion after all.
6:22 PM

Anonymous said…
Should be Cat in the Hat. I blame the computer keys for that!
6:23 PM

Anonymous said…
"I still say using this stationery is wrong because it is perceived to be official state issue."

Of course that is true. Just like a lot of Republicans voted for Daschle in the past and also now vote for Herseth and Johnson.

You joined the Republican Party, you tried to make changes and it didn’t work, so you didn’t get your way and you end up asking people to vote against the Party you represent! That’s just not right! I don’t expect that kind of behavior from a Republican nor from a Democrat

As you get older in life, you start to realize that sometimes just because you have the right to do it, doesn’t mean it’s the right thing to do!
7:14 PM

Anonymous said…
Shame on Stan for having an opinion that differs from the Republican party operatives! PP- You and other Republicans are arrogantly claiming the party has no room for different opinions or beliefs. In fact, why have the legislature at all? It would be easier if the GOP simply made the law.

It is amazing that you act surprised and shocked when Stan supports a Democrat after many in the Republican party have asked him to resign and leave the party. How can you accuse Stan of treason when he was beaten in the primary by a local officer of the same party who had her office in the County GOP headquarters? Isn't that more treasonous?
7:30 PM

PP said…
7:30, if I recall, her office was in the same building, not the same office. I'm sure stan could have had one there as well if he wanted to rent it.
7:38 PM

Anonymous said…
The leadership does not have the guts, backbone or brains to expel adelstein from the caucus. They should have used the "symbolism" on the mainstreamers during the next session. But they did not, those mainstreamers kept their chairmanships of committee's, Ed Olson as chair of education for one. Anyways, if they had any... they would have acted before Adelsteins shenanigans.
8:32 PM

Anonymous said…
Stan should learn how to be gracious in defeat. Yes, he has every right to say and do what he wants, but he looks really petty. In politics, you lose some and win some. Apparently, Stan hasn't learned to take the losses with the wins. Sounds a lot like Joe Lieberman.

Here's my lesson for the War College for tonight. For those of you running this year or in the future, if you happen to come up short, lose graciously. Voters will remember how you handle yourself in defeat. Those of you who handle yourself well may come back and win next time.
9:10 PM

Anonymous said…
PP - You're really splitting hairs w/ that above clarification that they are in the same building, not the same office... As someone who's worked IN that office, I never considered Eli's office to be a "different" office... Just another room.
10:50 PM

Anonymous said…
Actually, even though Stan lost the primary, or if he had decided not to run,he is still a State Senator up until the moment the new Senator is sworn to take his seat. Also, every letter a legislator writes is at his own expense, we have no franking priviledge in SD.
11:41 PM

Anonymous said…
The national Republican strategy of subsuming the Religious South from the Democrats by championing issues that are clearly the domain of religious philosophy rather than politics has been successful in the short term, yet catastrophic for our two-party system. It is, as a pundit has recorded, "an unholy alliance".

Many Republicans are experiencing identity crises as profound as the Democrats today. The fact that Republicans have been winning within the national theater - by the slimmest of margins - has kept the party from imploding to date.

When and if the party returns to its roots - limited, less personally-intrusive government and fiscal responsibility - our party will stabilize.

Stan merely has the guts - and the confidence - to stand up and say it.

The Republican Party has lost its way.
7:08 AM

How many of us Republicans have to be alienated by the intolerant religious right before the party will welcome differing opinions?
9:42 AM

Anonymous said…
Elli's campaign office is in the same building and it is my understanding that it is separate and her campaign pays for it. What is really grievous is that the chairman of the Republican Party in Pennington County openly supported Adelstein in the primary, lawn sign and all. I have lived in states where party chairmen stay neutral in primaries. And worse, this chairman is doing nothing to help Elli. Not like she needs his help, though. Pennington County republicans need to wake up and get new leadership.
10:00 AM

Anonymous said…
Another round of applause for poliglut! I'm encouraged by the posts that indicate there is room for a few moderates in the Repubican ranks.
10:23 AM

Anonymous said…
Ridiculous. Anyone who votes Democratic this year is just itching for us to get hit again.

We should be supporting these candidates vigorously:

Anonymous said…
Poor Stan...such ignorance from a self proclaimed genius. From the sidelines (don't live in his district..or city for that matter) I've observed at regional and statewide Republican meetings his arrogance, importance and the looking down his nose at whomever he thought was of lesser importance. I can say it is now enoyable (from the sidelines) to watch him writhe in his defeat. This letter..another example of his poor loser, declining political future. A political comeback someday for this poor looser??....no way!
9:17 PM

Anonymous said…
Everybody knows STAN is a dinosaur.
12:05 AM