I got a reader award!

By PP - August 18, 2005
If you catch the comments by "Jackson" under the prior post, apparently I've joined an elite club and deserve an award. He didn't send it, so I made my own. 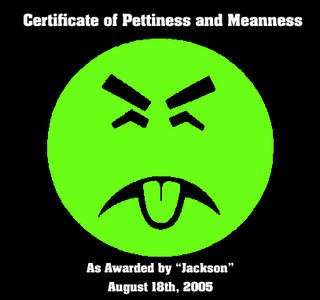 Okay, readers. I try not to be too snarky unless there's a purpose behind it.

And as noted to our friend "Jackson," my purpose and point in the prior post was to illustrate that if someone considers themself to be an animal activist, they are not likely to be an effective communicator for an organization trying to win over the hearts and minds of our largely agricultural state.

As I noted in my reply to the comment posting to Jackson "If someone decides to place themselves in "the game" they'd better be ready to take a bump or two. It goes with the territory. It's not personal. Believe me, if I want to get personal, I'm perfectly capable, and know how to do it. And I do it well.

Do I get personal with the other side for pointing out what they see as shortcomings of Senator Thune? No. If I don't agree, I might post as such, but it's not a personal thing against them. It's just my political view. That's politics.

But, conversely, I expect the same courtesy. Tell me if you disagree. It's ok. It's America. I even allow your comments on my site. But call me petty and mean for expressing my opinion? That's not a very fair action, Jackson.

(And yes, I wanted to use the phrase "Action Jackson")

If you don't agree with a post, it's ok to tell me that (and explain why). But don't start calling me names because you disagree. Then you're just moving legitimate debate down into the gutter. While I may have slept there on occasion in college, that was 15 years ago. So, let's keep our current debates to a little higher standard.