By PP - April 20, 2006
If you recall, about a month ago I spent a little time picking on District 6 GOP State Senate candidate Jim Holbeck who held himself out as "a moderate" to distinguish himself in the race against State Senator Brock Greenfield. My point was that Brock was going to kick his silly butt, because staking out "the moderate territory" in that district in a Republican primary was just stupidity, among other things.

But today, Holbeck managed to demonstrate to the voters the kind of public policy material he's made of.

Holbeck, the Superintendent of the Clark County School District was there as his School Board took a vote on whether or not they intended to participate in the lawsuit against the State of South Dakota to increase educational funding.

As the discussion progressed, Holbeck himself was asked for his opinion on whether the school district should proceed with participating in a lawsuit against the State of South Dakota. And here's where he showed his mettle: 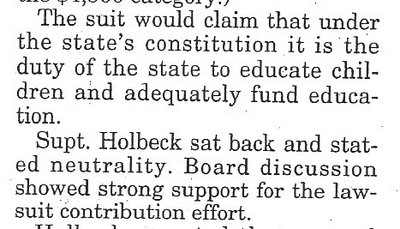 Yes, "Supt. Holbeck sat back and stated neutrality." Is he kidding anyone? He's stating neutrality on a lawsuit over whether or not "the state's constitution says it is the duty of the state to educate children and adequately fund education?"

Compare that to where he was on the issue of educational funding in January 2005 as he appeared on KELO:

Clark is one of those schools. In a school that's use to graduating over sixty students per class, in two years Clark will only have 11 students in kindergarten, which means they'll lose thousands of dollars in state aid.

Holbeck said, "And you find that your offering less services, and that's kind of ironic cause we're in a time where no child left behind tells us we have to up the stakes and do a better job, and we're saying here in South Dakota we're gonna have to do that and we're not going to give you the money to get it done."

Holbeck wants politicians to put their money where their mouth is.

It seems to me like he's singing a different tune than he was a year ago. What a difference a year makes. Except the only difference between now and January 2005 is that he's running for office.

And with a year's time, apparently anything but "stating neutrality" and being "a moderate Republican" is just too difficult for him to defend. It's like he's a tower of Jello in the form of a man.

Unfortunately for Holbeck during the legislative session legislators are expected to vote. Vote it up or vote it down. You can't express neutrality during session, because it always comes down to a yes or no vote. Good or bad, you're expected to make a vote and be able to defend your position.

At the start of this election, Holbeck stated in his press announcement that "he's long been a staunch supporter of increasing state aid to schools, so it is no surprise that he intends to make it one of his signature issues in the primary."

And after tonight, that signature reads Jim "stated neutrality" Holbeck.


Just about every time we have an election in the state of South Dakota, you'll find that politicians will tell you education is their top priority, they get elected on that word.
- Jim Holbeck, KELO, 1/28/05

Anonymous said…
As a voter in District 6, I would like to see where Jim Holbeck stands on this issue.

He has a lot to live up to in competing with Brock Greenfield, who has proven his strength in providing efficient government, and this is not an example of where Holbeck would stand.
10:50 PM

Anonymous said…
ok...here we go again, and its about time for me to stop blogging here.

Does anyone here understand how far the SD legislature has reached? Please, stop and think. Bush doesn't support HB1216, basically Rounds has said in his typical chicken shit fashion that he doesn't support it as well...

The collective lot of you PP apologists can continue to agree with this course of action, but 1st the populous will beat you back and next, if need be will the courts. Pragmatism has its purposes, first of which is to lessen the time I have to spend thinking about the rest of you....good God, what happened this last year! Roger Hunt is your leader??

Sick and tired of you all thinking you even approach representing more than 30% the populace. Seriously, I like this blog, but who the hell believes the rest of the world is flat...other than Tom Friedman....

I was responsible for the aforementioned post which is why I and several other individuals are sending Jim H. $99. Brock is Brock, God Bless him but he is a man several stocks short of being impressive...sorry PP he's your buddy but you should have stuck next to someone w/potential, like Rich S.
8:43 PM

PP said…
Where did abortion enter this posting?

Aside from sticking with my friends, Brock and both RS included, this had to do with Holbeck's rolling over on the ed issue.

Last year, he was beating the hell out of the administration over ed funding. But now that he's a candidate, he's "stating neutrality"

(I don't think a lawsuit is needed myself).

What I'm giving him hell for is a lack of principle.
3:24 PM

PP said…
And anon, if you haven't paid attention, I'm a rape and incest exception person myself.
3:25 PM

Anonymous said…
I've heard from some reliable sources that the Repubs don't want Brock Greenfield back, either. I was told Janklow is using any political ties he has left to crush the man.

Also, doesn't Greenfield live in Fort Pierre? Someone check me on this, but, I thought he did.

And, while we're at it. The guy shouldn't be allowed to run for the Legislature. He has a clear conflict of interest because he serves as the Executive Director of South Dakota's Right to Life.

If the chatter I hear is correct, the Constitutional Revision Commission is going to make it pretty hard for people like Greenfield to get elected.

As a side note, it sounded like the school board was the voice. Wonder why that is? Maybe because it was a SCHOOL BOARD MEETING.
6:23 PM

Anonymous said…
Seriously, that's what I was thinking too...why would the school board not make this decision? It seems to me like it would be inappropriate for the superintendent to try to influence the board's decision with his opinion.
7:46 PM

Anonymous said…
If anyone has a conflict of interest, it's Holbeck. He's a school Superintendent, and much of the school's money comes directly from the state. If Janklow is out to get rid of Greenfield, all the more reason to support Brock. I'm sending my $ to him.
9:38 AM

Anonymous said…
Actually, only about 30% of school expenditures come from the state - thats the lowest in the nation.

Anywho, there's a difference though. Holbecks primary job is to ensure that kids in Clark get an education. That's what he gets paid for.

Greenfield's primary job is to get government-in-your-head legislation passed. His organization collects dues to send him to the Legislature. It's misconduct, IMO, and the Constitutional Revision Comission is going to lock down Brock.

Notice that everyone threw him under the bus for the PBS deal? Those senior appropriators use the young, stupid guys as their pawns. Greenfield, Kluadt... they do the heavy lifting for the Apas and the Earleys.
12:56 PM

PP said…
anon 12:56, I don't think there's a chance that Holbeck is going to win, nor are they going to "lock down" Brock.

In his legislative career, he's primed only 1 piece of abortion legislation. (look it up) And that was before he was their ED.

As I said under another post; if we ban people from serving who represent organizations, we're going to be knocking more than just Brock out.
2:23 PM