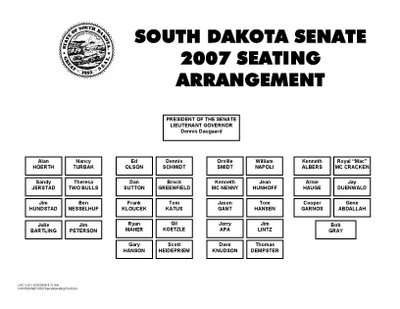 While they didn't put Frank Kloucek directly next to BJ Nesselhuf or Dan Sutton (per Frank's very public request), they did put Frank in a position where he will have to stare at the back of Dan's head. That is, at least until the rule violations are heard.

It looks like Dan will be in the Senate for a little while. I'm told that last Friday was the deadline given to him by his caucus mates to resign. With yet another ultimatum deadline having come and gone, Dan is dead set to put the Senate on a collision course with history.

What else? According to the chart, Frank's new seat mate is Democrat Tom Katus. And Sutton's seat mate? None other than Republican Senator Brock Greenfield.

(I'll have to ask Brock if this is intended as punishment for he or Sutton.)

Anonymous said…
Looks like Gray has a real sense of humor.
9:33 AM

Anonymous said…
Looks like Kloucek got the same committee assignments as last year too. Apparently it doesn't seem to matter to the Dem senate leadership that when a member's backstabbing activities become a shameful public event, he still gets his rewards. Apparently there is no spine when it comes to reprimanding Kloucek or Sutton.

Who's in charge? The inmates?

The new leadership just flunked its first test.
9:37 AM

Anonymous said…
PP, if Dan is innocent, why should he resign?? WOULD YOU?? I think he made his point loud and clear, now let the chips fall as they may...but everyone is entitled to have a fair shake, until otherwise proven.
9:56 AM

Anonymous said…
At least weak-minded, frequently befuddled Dennis Schmidt has someone to help him keep his head out of his @#$.

Anonymous said…
I see they put the big boy next to Danny, he steps (feels) out of line and one back hand is out.

I shouldn't have wrote that but I couldn't resist.
2:11 PM

Anonymous said…
After a few days with Frank, Katus will probably call Ellie to see if she wants to take over !!!!
12:26 PM

Anonymous said…
At least the PP's buddy, aka Big Boy, won't have to resort to his typical committee behavior of *snicker snicker* and instant messaging to chat with Danny while the senate is in session.
5:37 PM

Anonymous said…
Notice Sioux Falls, lined up in the back.

Looks like a power move in hope that other seat assignments distract from the obvious.
10:37 PM

Anonymous said…
The Sioux Falls people in the back are the ones who were elected by their peers to be in leadership.

Leadership always is in the back row.
8:19 AM