10 AM Convention update - Clearly, I was outdone.

By PP - June 24, 2006
I found out last night that despite my best efforts at shameless self promotion through my SDWC t-shirts, one of the candidates outdid me. Yes, I was out promoted.

Dan Lederman from Union County had asked if I minded if he made a few t-shirts also promoting the SDWC. Of course, I said "absolutely. Please go ahead." And he came up with the WWPPD shirt styled after the What Would Jesus Drive... er, Do... bracelets and shirts.

As you can see from State Senator Lee Schoenbeck who is wearing this up on the head table this morning, they're great. They're absolutely hilarious. 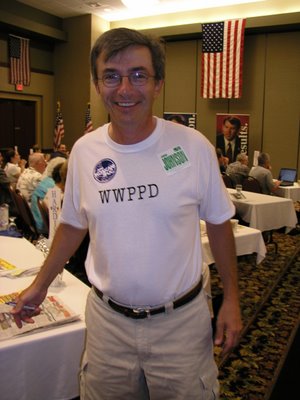 Suprisingly to me, there are a lot of people around who get the joke. (Okay, MP, NOW will you believe there are more that 13 people who read this?)

As mentioned, Tim Rounds apparently withdrew his candidacy this morning at the Constitutional Candidate breakfast this AM. One of the constitutional officers said it was a really good speech. I, on the other hand, was at econofoods buying bananas and donuts for my horde of hungry children, so I missed the immediate scoop. But, I can certainly pass it on.

Right now the constitutional officers are starting up their acceptance speeches, so I'm going to pay attention and quit blogging for the moment.

Anonymous said…
Thanks for the updates from Watertown....had to stay home with the family...going to a picnic/reunion at Rushmore Waterslides...I like Lee's shirt...What would Planned Parenthood do? :) Or??? What am I missing? Great to hear the news on Supporting 1215 and marriage! Good pictures! Keep up the good work!
12:52 PM

Anonymous said…
Where can I get one of those shirts?
2:34 AM

Anonymous said…
Is Lee wearing a Koskan for PUC sticker? PP, can you find out if those were printed in January or February??????????
3:12 PM

Anonymous said…
Compare the photos of Rich Sattgast and Lee Schoenbeck on this post. Who looks more gubernatorial?
3:43 PM