1pm update - The Power Lunch, and wait for a second

By PP - June 23, 2006
I suppose I'm a bad delegate. I skipped the official luncheon today. I had a few things to do like check into the hotel, so I bagged it.

After I got my chores done, I did run into a crew who were in the midst of other things, and we all agreed to go to lunch together. Along with Representative Tom Hackl, Rapid City Councilman Sam Kooiker, Isaac Latterell, and State Senator Borck Greenfield, we made our way across the highway to "Woody's," a little sports bar. It's pretty inconspicuous, but wow, it has my vote of confidence.

It was interesting sitting down to lunch with two of this election's giant killers, Isaac and Sam. According to conventional wisdom, neither one were given much chance to win. Sam was outspent by one of the most wellknown politicians in Rapid City, and Isaac was dismissed as an overambitious youngster.

But both of them overcame incredible odds by plain old-fashioned hard work. Sam mentioned that he spent his time with extensive door to door, while his opponent apparently put much of his money into television, while forgoing a door to door campaign. One anecdote he mentioned was that he knocked on the door of Tom Hennies' next door neighbor, and apparently Tom himself had yet to come ask his neighbor for his vote.

Of course, Isaac was equally reliant on door to door efforts and put forth a solid yard sign effort in his campaign against Duane Sutton.

Tom Hackl did confirm in person that he's out of the Public Utilities Commission race, which currently leaves the field wide open for Rounds and Koskan.

Speaking of Tim Rounds, I did run into he and Deb Peters as I was heading back to the convention hall. I chatted with them for a few moments as Tim asked me for my consideration for his race for the PUC. I tried to also erase some confusion over the post I previously did on the Engels/Peters House race, where Rich Engels noted three points of his campaign against her, and I had asked for three from her, and the whole thing flopped badly. Thankfully, Deb is understanding and accepted my feeling bad about it.

Since I had taken a picture of the Campaign for Healthy Families Booth, I told Brock I'd take one of the South Dakota Right to Life booth so I could be "fair and balanced" on the issue. 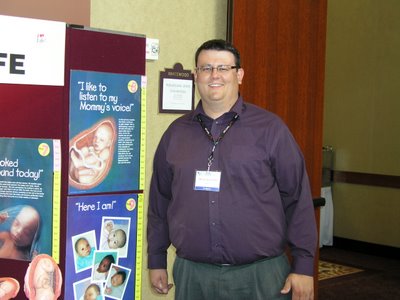 We're got three resolutions left to approve this afternoon on: marriage being between a man and a woman, origin of species, and improving health and safety. Once we get through that process, we'll begin the platform and nomination of candidates.

For those who are asking for more pictures, I'll be snapping them left and right tonight. I've got a few minutes left of power on this laptop, so I'm going to try to conserve what I have left before I get back to the room to let it charge.

Hang on until the next update.

Anonymous said…
How about nominating Dana Randall as the next State Chairman? No one works harder for all the GOP candidates than Dana Randall.
2:51 PM

Anonymous said…
I second that! Dana Randall would make an outstanding Chairman! Dana would help unite the Party as well.
3:19 PM

Anonymous said…
Since there is already a first and second nomination, can we move ahead and replace Randy Frederick with Dana Randall? I'd support Dana for Chairman as well.
3:30 PM

Anonymous said…
so who are you giving your vote for Koskan or Rounds????? Inquiring minds want to know!!!!
3:30 PM

Anonymous said…
"marriage being between a man and a woman, origin of species, and improving health and safety."

No wonder we're getting sued.

Anonymous said…
Resolution number four: We shall worship the sun and moon as gods...and fear them!
5:26 PM

Anonymous said…
Get rid of Fredrick and the party can relax. We need somebody to gather behind, not split us down the middle.
7:40 PM

PP said…
Anon 3:30 - I haven't spoken to Koskan just yet. (Besides, I wouldn't want to violate the sanctity of the voting booth)

Anonymous said…
On the origin of species resolution, could you link to it War College, or put the text up on your site? While I'm afraid I already know what it says, perhaps by some happy accident it isn't anti-evolution, which would be wonderful to see.
8:37 PM

Anonymous said…
Could you post or link to the final resolution on evolution, marriage, abortion that were discussed?
8:46 AM