11 am update - we're off and running as the convention convenes

By PP - June 23, 2006
We're in the middle of resolutions at the moment, so I'm taking a break from the activity to type an update. As you see below, Representative Casey Murschel is chatting with Angi Nielsen from the State GOP as Casey mans the South Dakotans for Healthy Families booth. As I mentioned, they've got about 5 tables full of promotional stuff, and Representative Murschel is stationed directly across from Senator Greenfield at the South Dakota Right to Life Booth. 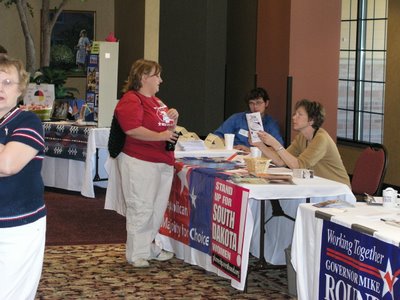 Here's a photo of Amanda Dodson and crew as they man the registration booth while the delegates register in a fast and furious manner, and get their bags of convention swag. (Report on the swag later). 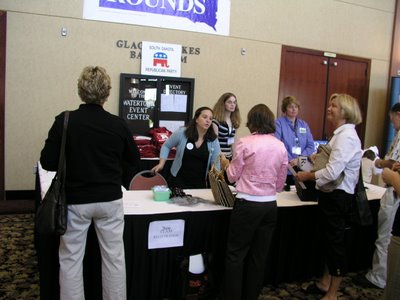 Once conventiongot going, Mary Jean Jensen gave a rousing report for her position as National Committeewoman, speaking about the good that South Dakota Republicans do, and the potential of the next national convention to be in Minneapolis (I'd love to go back to NYC myself, personally). 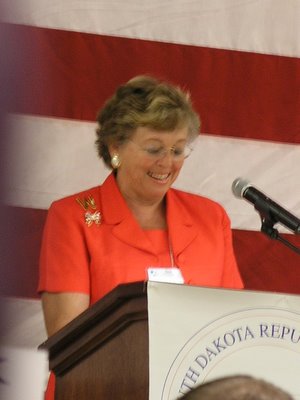 She also took special note of how the Ohio Republicans specially recognized the contributions of several South Dakotans for turning in a victory. The group broke out into applause when she specifically related that a committee person noted that Ohio would not be a red state today without the hard work of Republicans like Larry Russell.

We're in resolutions at the moment, a bit bogged down as delegates discuss a resolution plank on HB1215. Before that, I had the distinct pleasure to personally second the acceptance of the South Dakota Republican Party Resolution rejecting the J.A.I.L. Ballot initiative, otherwise known as Amendment E.

As we continue voting and discussion, I'm going to sign off for the moment. I still have to go get my hotel room and all that other nonsense.

Anonymous said…
Lord, why did Larry go to Ohio? He got run out of SD after nearly getting indicted. The ohio election problems are also well documented and some GOP official in that state are still in hot water.
12:09 PM

Anonymous said…
Let's be clear and frank here...the only reason why Russell and his talented team were ousted was because they took the bullet for the Thune campaign. Jeff Thune was the individual who committed the wrong doing (why wasn't he notarized in the first place?), but Thune's campaign was not going to allow Jeff to take the blame because his last name is Thune. Therefore, Thune's team threw Russell, Schlekeway, Fahrendorf, Mertz, and Alick under the bus. These gentlemen graciously stepped up and took a bullet for John Thune and his political career. I sure hope Thune has personally thanked them for all their hard work and dedication.

Secondly, the only reason why some Democrats and some Republicans speak badly about Russell is because they are jealous of his talent and they know he is a major threat in years to come if he so chooses to run for a state-wide elected office.

Russell has spent almost his entire political career helping fellow Republicans get elected. I think it's time that Larry receives the accolades that he deserves.

I am proud to call all of these men who resigned my friends. I know them on a personal level and they are all men of fine character and integrity.
12:35 PM

Anonymous said…
Let's really be clear and frank, Larry. All of those mentioned in the last post are guilty of fraudulent voter activities. They all got off light. Imagine the uproar - and the penalties - if these lawbreakers had had been Democrats.

By the way, Ohio isn't a red state anymore. The GOP scandals there have changed it to blue. GOP Gov. Taft pled guilty to accepting illegal "gifts" - in effect bribery. His polls are somewhere south of President Bush, and he is completely unable to accomplish anything. A big GOP contributor convinced the state to invest in gold, then he stole the money. Ohio voters are eager top vote for Dems.

Larry Russell will take his anything goes philospohy elsewhere, and they will have scandals too. Russell is kryptonite.
1:02 PM

Anonymous said…
Fredrick has had more cheeseburgers than Greenfield
7:46 PM

Anonymous said…
Liberals are scared of talented conservatives. They hate Thune and Larry Russell because they are both good men.

I might as well bring up the dead and underaged Dems voting in 02. And the after hours changing of votes. It didn't happen in 04.

I wonder if Daschle ever wished he wouldn't have taught Timmy how to change votes in Indian country? This State would be better off with Thune and Daschle. What does Tim do anyway, wait for Thune to do something so he can tag along and get credit?

Is Tim going to run again? He has to be so scared, no more playing with votes after dark. And Tommy won't be there to hold his hand/campaign for him.

Any jerk who votes to give my social security to some illegal is going to get thrown out of office!

The writing is on the wall. Tim won't be running again. He will say his health is bad or his wife's but no matter what he is gone. You heard it hear first!
10:00 PM