Candidate website - Katy Dressen for House, and why my name must be mud in District 9 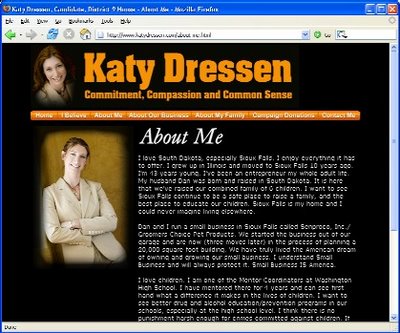 Katy Dressen, Republican Candidate for District 9 House has a website up that you should go check out. I like it. It's graphically pleasing, and it's always enjoyable reading about someone who also has 6 kids.

On another note, I had heard from one of her colleagues that Deb thought I was bashing her a while back. In relation to another post, Rich Engels had sent me some information on some of the issues he was going to be using to take Deb on. So, I posted it and invited her to reply. The intent was to generate some heat (and interest in the blog) over two candidates hashing it out. Neat, huh?

And it really didn't go anywhere, except she thinks I was bashing her. Great. Like I said, I stink.

So, no Deb. I was not bashing you. I might give others a hard time, but that was not the case in that instance. Just another idea for the blog that backfired.

Anonymous said…
The web site is full of fluff and trendy cliches. She sounds like a liberal.
12:31 AM

Anonymous said…
I can assure you that Katy Dressen is a fiscal and social conservative. I am proud to call her my friend!
11:26 AM

Anonymous said…
Hey jer bear, If you have never voted Republican you dont want to start with Dressen. She's part of the far right anti abortion, abstinence only, sex police wing of the republican party. She won't be content until government controls every aspect of your life.
9:46 PM

Anonymous said…
Katy may be anti abortion because she believes in the sanctity of life but she is not for an abstinence only policy and is not part of your so called "sex police wing of the republican party". She believes that government exists to help improve the lives of those in our society not to control them.

You obviosly don't know her. I've known her for 10 years and the state of South Dakota would be very fortunate to have her representing it. She's compassionate to human suffering and has been a mentor at Washington High School for several years. Her agenda is one of truly helping the people. Katy's not self serving and wants only to give back to society and the state that she so dearly loves.
Democrats and Republicans alike would both benefit from Katy representing the state. She has a genuine desire to make a difference and has a gift for bringing people together.
11:01 PM

Anonymous said…
As Rep. Deb Peters said in her anonymous comment of 11:26 a.m., Katy Dressen is a fiscal and social conservative. But don't expect anything more than fluff and trendy cliches coming from her in democratic district 9. Like Deb Peters before her (who lied about being for broad-based sex ed then voted for abstinence-only) Katy's object in a democratic district will be to make herself seem more liberal than she really is. Hopefully she won't resort to outright lies like Peters did.
12:27 AM

Anonymous said…
Hmmm..... Let's see, we have a couple of people that actually know Katy Dressen quite well, speaking very highly of her.....

And then... We have someone who obviously has never even met her in their life and yet this person makes all kinds of negative accusations and assumptions about her.

Anonymous said…
That's what you get for thinking a Republican woman is hot. Once you go "red" you'll never let a another blue into your bed.
11:59 AM