By PP - May 31, 2006
Lots of blog technical stuff tonight. At the suggestion of one of the readers who was kind enough to make a donation for the upkeep of this mess of a blog, I've raised "the paypal beg button" up higher, so as to draw greater attention to it. Just in case anyone else is so inclined. (you know, inclined to make a donation..)

Otherwise, what political stuff is out there? I completely forgot about today's letters to the editor in the Rapid City Journal:

The incumbent senator, Stan Adelstein, while campaigning, tells his constituents he's an effective legislator with leadership qualities. His legislative record is very different. A look into his performance the past six years tells a different story.

Adelstein has been the prime sponsor and originator of 54 bills; 48 were killed, six passed as introduced. His lone bill, SB119, which passed in the 2005 session, did so because Sen. Bill Napoli brought the interested parties together for several meetings, none of which were attended by the prime sponsor, Adelstein.

Adelstein missed the first week of the Appropriations Committee in the 2000 session. He had other interests more important than the Legislature. This session he did not even bother to show up for the last day to vote to restore funding for public broadcasting.

You judge for yourself if that exemplifies leadership.

If the voters of District 32 truly want an effective legislator with proven leadership qualities, vote for Elli Schwiesow on Tuesday, June 6.

Time for a change

The following bills were authored by state Sen. Adelstein. They are matters of public record and are indicative of the kind of legislation we can expect if he is re-elected.

1) SB167, an act to provide health insurance coverage for contraceptive drugs and devices. This bill would have driven up the cost of health insurance for every citizen. Adding mandates like this could force more health insurance companies to leave the state. Asking everyone to share in the cost of a personal responsibility decision does not align with Republican values. The bill was killed unanimously in committee.

2) SB120, an act to revise certain requirements related to the identification of voters. Under S.D. law, a voter must show a picture ID from driver's license, passport, tribe or college to prevent voter fraud. Or the voter may sign an affidavit before voting. This bill would have required no signature "if two members of the precinct election board recognized the potential voter." Only three Republicans voted for the bill.

As with Thune's defeat of Daschle, it's "Time for a Change!"

I firmly believe that Lance Russell is the person for that position. I have known Lance for close to 15 years. I have worked closely with him on many occasions.

Lance is a good lawyer, an excellent prosecutor and understands the needs of the rural area people as well as those from the towns and cities. He has fought hard for the ranchers and farmers without pay. He has worked tirelessly to get the federal government to control the prairie dogs on federal land and allow the ranchers to control the prairie dogs on their land. He did not quit until he succeeded in getting the job done.

We need someone like Lance who understands the law and how it applies to all the people in South Dakota. Some of you do not have a political primary. I urge you to vote for Lance Russell for judge.

Two letters from his colleagues going after Senator Stan Adelstein, and one from Gordon "Gordo" Pederson in support of Lance Russell running for Judge.

I was kind of suprised to see so many letters from Legislators popping up less than a week before the primary. But now is the time where those that are in office are making their preferences known. Here's another one that's appearing in the District 6 newspapers today for Samantha Stormo from retiring Representative Art Fryslie: 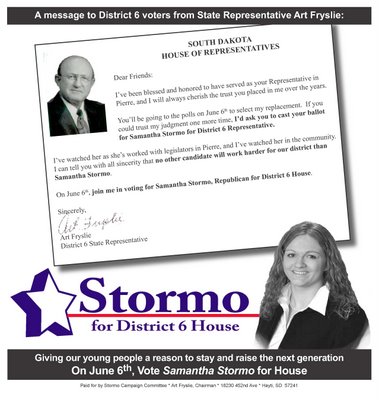 Here's a further example out of Senator Brock Greenfield's brochure that's hitting the streets as we speak from Senator Lee Schoenbeck: 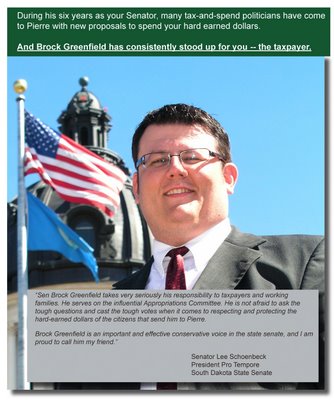 I hear there's an ad or two out there with more legislative and political endorsements as we wind down towards election day this next week, so I'll keep my eye out for them. Otherwise,
will all these legislative endorsements make the candidate into the winner?

Who knows. Only election day will tell.

Anonymous said…
Republicans endorsing Republicans. No surprise there. Why should anybody pay attention to such a thing that is so predicatable and utterly meaningless?
7:41 AM

Anonymous said…
Because pats on the back (no pun intended) always feel good.

What else are they going to say...education funding is a mess and we just let Roger Hunt and Lesslee Unruh set our healthcare policy?
8:41 AM

Unknown said…
Greenfield's leer in the photo here is similar to the one he gets when staring up Maggie Gillespie's skirt.
10:49 AM

PP said…
Bob, care to post your address in case he decides to pursue a slander suit?
12:44 PM

Unknown said…
That stupid SOB wants a piece of me, he knows where to find me.
2:36 PM

Anonymous said…
Not surprising that a Republican would support a Republican? This is a primary guys, except for the judge race!

No matter whom they supported it would have to be a Rebublican in a Republican primary. Their letters of support are intended to get votes from other Republicans who will be voting.

Seems like you must be just plain bored or writing just to read your comments.
4:10 PM

Anonymous said…
Notla, you haven't explained why voters should pay attention to endorsements, which are just one person's opinion. Voters can make their own opinion as well as the endorsers can, and without the endorsers' help. Your comment is a whole lot of nothing just as those endorsements are.

You must be bored or like to see yourself in print to remind you that you're alive.
4:45 PM

Anonymous said…
I love the photo of Brock. When I think of the flag, the seat of government, this countries long struggle to keep hopes and dreams alive for all, I think of people like Brock and how they've lead the way!
4:58 PM

Anonymous said…
Anon 4:45, Why should anybody pay attention to such a thing? Because some Republicans may be interested to hear what other Rep legislators have to say about a Rep candidate.

In Stan's case those legislators have worked with him. Utterly meaningless? No, not when they have had the opportunity to see how Stan operates, and it's Rep running against Rep.

But your swipe at Reps was a total fiasco. It shows your inability to see the value of an endorsement in an inter-party race.

Since you weren't bored, you must have been writing so you could read your comments. Gee, you sure have originality, repeating what I wrote, good job.

Regarding Newland's jab at Greenfield's smile, such a ridiculous personal attack in a political blog. I think Bob was in the weed patch too long.
6:15 PM

Anonymous said…
Doesn't Brock still live at home with his mother?
12:47 AM

Anonymous said…
I love Brock Greenfield. I ain't no hollaback girl!
1:00 AM

Anonymous said…
Anon 12:37 Are you serious? Seems like a dumb question, but maybe you are sincere. Why didn't you ask if he lived with his dad or parents? His parents live in Doland, he lives in Clark.
7:06 PM