"Go after the politicians and their sources of revenue."
- Rep. Gary Jerke

By PP - January 03, 2007
I was reading the Freeman Courier today, when out jumps this article with Republican Representative Gary Jerke discussing the upcoming legislative session. Pretty mundane, until you get to the part where you can almost imagine Gary getting a little wild-eyed as he starts in on what the legislature needs to tax next:

There will be a big push in this legislature to tax advertising, said Jerke. One idea, he said, was to tax political advertising one to two percent. PAC's seem to have unlimited resources, he said. Another idea expressed, he said, has been that for every $2 spent on advertising, an additional $1 should be assessed for education.

"Go after the politicians and their sources of revenue," said Jerke.

Read it all here (registration required).

What? Is he freaking kidding me with this pablum?

*Sigh* It looks like this is one of those times I need to get out my spanking stick for someone of my own party.

First off, given that he just got past his first campaign after he was appointed in 2005, I might be able to get past the fact he hasn't learned the adage "don't pick fights with people who buy paper by the roll, and ink by the barrel." Because it sure seems like he's kicking dirt on to the newspaper association's shoes by proposing a advertising tax.

But then he goes into his statement "...for every $2 spent on advertising, an additional $1 should be assessed for education..." I hope he's just paraphrasing and not claiming such abject stupidity for his own. Why? That revenue source would be even less stable than video lottery - a form of revenue already rejected by schools because they don't want any unpredictable fluctuations.

As far as PAC's having unlimited resources, he would know. While he only raised $2345 from individual contributors this past election, he raised $5785 from Political Action Committees. So, for every dollar he was able to raise from individuals, he raised just shy of $2.50 from PAC's. 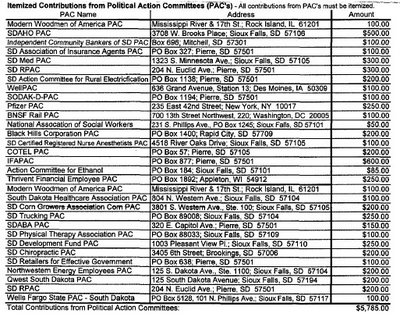 (Click on the image to enlarge the list of Gary's PAC donors)
Unlimited resources, indeed. I'm sure his political action committee donors will greatly appreciate his sentiment as he asks them to cough up another 30%. But better yet, maybe he should lead by example.

And at least according to his reporting form, he has the ability to write out of his checkbook right now to the Hutchinson County Schools.

Go ahead, Gary. If you're serious, write it out this very second. You made the statement to "go after the politicians and their sources of revenue." And while I'm on the subject, why stop at their campaign funds? Why don't you send them 1/3 of your legislative salary as well. Isn't that one of your sources of revenue (you politician, you)?

The thing is, I might disagree with some of the revenue sources being proposed, such as income tax, but at least I can respect it's offering as being a realistic possibility (that I will fight tooth and nail). Trying to propose "political taxes" which at best are completely unstable, and at worst, really, really low some years, is not a solution.

It's a knee-jerk patronizing gimmick that isn't good for anything other than a headline and a patronizing "it's us against them darn politicians" sentiment for the 5 minutes it lasts.

So Gary, consider yourself duly scolded. Now go forth, and try not to pander to your audience in such a ridiculous manner ever again. It diminishes the office.

Anonymous said…
This is the kind of vindictive silliness that backfired on Tom DeLay and made him look like a jackass. Gary ought to be smarter than this.
7:06 PM

Anonymous said…
What a great idea!!!

Anonymous said…
if the speech is free, why does the media charge to print it? Thune vs Daschle =30 mil, Roger Hunt= 750k, plus all the others, and not SD money,for the most part cash from out of state. NRA, Sierra Club,Pro Life, Pro Choice, Gaming, Sportsman, all spending tons of cash maybe Gary is on to something.
9:47 PM

Bill Fleming said…
The media pays the taxes on the materials. To tax the advertiser again is double dippin'.

Check this link for more info.

Anonymous said…
Advertising should be taxed. Why not? All advertising, not just political.
10:27 PM

Anonymous said…
I think this is a bad idea...if they have to give a percentage to education...politicians will advertise MORE to say they are giving their money to education.
10:29 PM

Anonymous said…
9:47 pm - Why does the media charge to print it? They have operating costs just like any other business.

Paper and ink continue to increase in price, as do postage rates. Presses must be kept in operating order.

Plus there are the usual business expenses related to maintaining a building and keeping the temperature controlled. And don't forget the need to pay salaries and fund benefits for employees.

Advertising revenue makes newspapers possible. I'm not familiar with larger newspapers, but I know that circulation income through subscriptions and counter sales is not enough to keep a small town newspaper with limited circulation afloat.

Freedom of the press has its limits, and those limits are in form of advertising revenue. Big advertisers usually have clout, and if that income is much needed, as it usually is, advertisers who opt to dicate content often do have some say over what a newspaper prints.

That might not be the way our forefathers wanted it, but it's a modern day reality. A newspaper can exercise freedom of the press only as much as its finances allow.
10:46 PM

Because if you print up a flyer or a handbill or a brochure on you computer, or make a website, or post a notice on your local bullitin board, or wear a T-shirt with somebody's logo on it, or tell sombody that they should buy something you'll have to pay a tax, you moron.

Anonymous said…
I am not a moron, but if it pleases you to call me that, so be it. And I have thought about it a lot, thank you.

Anonymous said…
6:19 AM The newspaper pays nothing!

I pay the bill. Any extra costs they have are passed on to me the reader!

Tax advertising and you tax me and I have had enough of the extra taxes.
8:43 AM

Anonymous said…
Anon 6:19 am - No where did I say anything about whether anything should be taxed. If you read what I wrote carefully, you will see that it only deals with why newspapers must charge for printing something. The word "tax" isn't mentioned once.

Anon 7:16 am - This might come as a surprise to you, but there are other newspapers in the world besides the Argus. I have worked for other, smaller newspapers, and I still write part-time for one.
Because I believe in being polite, I will refrain from calling you an idiot.
9:13 AM

lexrex said…
regardless of how the money would be used, raising taxes is a bad idea. we got enough. conservatives in the legislature would do well to fight this, or any tax increase.
10:53 AM

Anonymous said…
For discussion purposes, following is the official position against a state advertising tax from the American Advertising Federation:

Many legislators, when looking for new state revenue, have suggested expanding the existing sales tax to include many services exempt from taxation. Proponents claim that services are the fastest growing sector of the economy, yet they are not included in the sales tax. Advertising is typically one of the business services targeted. Proposed bills could include taxing media purchases, advertising agency services or both.

AAF Position
A tax on advertising services or placement increases the cost of advertising. Because most clients operate on a fixed advertising budget, they will compensate for the tax by decreasing their advertising purchases. This will have a direct—and negative—impact on the advertising industry, economy and state revenues. Advertising is the engine that fuels the economy. Less advertising means fewer sales. Fewer sales mean reduced revenue and fewer jobs. Fewer sales also result in less sales tax revenue for the state. Advertising is a legitimate cost of doing business and not the type of end-use consumption targeted by sales taxes.

Opposition
Proponents argue that since services are a growing part of the economy, they should be subject to the sales tax. They often do not recognize the distinction between different kinds of services or between business and consumer services. Service taxes may be introduced to raise or replace other sources of revenue.

Legislation
Since Florida passed and repealed an advertising and services tax in 1987, well over half the states have considered, and rejected, a tax on advertising. The most recent proposal was in Pennsylvania, where an advertising and services tax was passed in the Pennsylvania House of Representatives as an amendment to a bill addressing medical savings accounts (Senate Bill 854) but was stopped by the Senate after a hearing on the matter.
1:52 PM

Anonymous said…
Wow, an AAF statement on why not to tax advertising - is there just a hint of bias here???

You could use that same flawed reasoning to say it's wrong to tax anything.
2:33 PM