And the Adelstein money funnel reports start coming in.

By PP - October 30, 2006
During the primary, I reported extensively on the transfer of massive amounts of money from one political action committee to another by State Senator Stan Adelstein in order to avoid financial contribution limits that South Dakotans of lesser means (i.e., most of us) would normally follow.

Tonight, as pre-general election reports start to be filed, the first of the Stan-funded pacs are reporting. And first on the list - "nix on six". 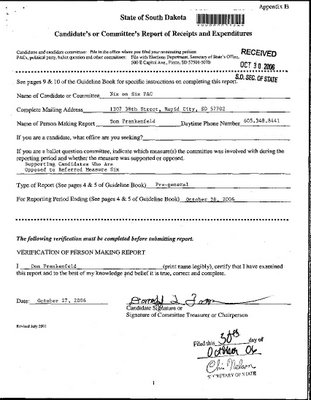 This political action committee has former GOP legislator and congressional candidate Don Frankenfeld helming it on behalf of Senator Adelstein.

Why am I noting that he's just helming it? For gosh sakes, Stan is the only contributor to the tune of $15,000.

Tom Katus, Theresa Spry, and Dennis Finch were all the beneficiaries of a big influx of stan-cash to the tune of $5000. And as the name of the political action committee would imply, aside from the fact that all are Democrats, all would appear to be pro-choice candidates.

It remains to be seen if this is only the first volley in Stan's war against the Republican party he professes to belong to. And it must stink being Tom Katus when Stan's giving you tons of cash, having already served notice that he may attempt to reclaim the seat he considers his own.