By PP - October 30, 2006
Was that Rick Hauffe at Mary Giebink's press conference on abortion today? 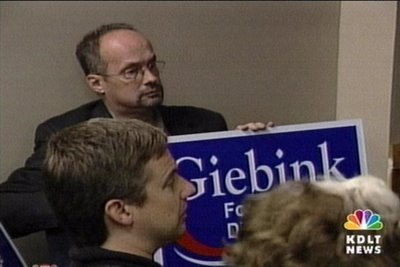 It was probably seeing these which helped me develop my own love of candidate postcards.

Some GOP Candidates would ignore them when they came out, some would groan, others would cringe. I think it was in 1992 when my favorite one came out. Republican representative Mike Wagner had a grocery store and it got busted in an alcohol sting. And by God, Rick made sure he was reminded of it a few weeks before the election.

I remember Mike just howling about it pointing out to me "Look what they did. Look what the Democrats are doing to me."

And all I could think was... Hey, that's a pretty good one. I would have used that issue too.

(update - sorry for the misspelling.)

Anonymous said…
Billion, Giebink, what's the difference? They're all far-left abortion-lovers. Didn't Rick run for the legislature not too long ago and get smoked?
10:52 PM

Anonymous said…
"abortion-lovers." Nice, and stupid. Move to Idaho. Oh wait, the have a gay US senator. Move to Utah.
8:04 AM

Anonymous said…
That is not Rick Hauffe, that is clearly the webmaster of the Smokey and the Bandit fan web site, his name is Ice Pick and he lives in a Winnebago near Brrokings, where he attempts to convince people to call him Jerry. Fun guy though, but word to the wise do not let him talk you into wrestling
9:28 AM

Anonymous said…
That is Rick Hauffe, a true gentleman of South Dakota politics and an amazing Banjoist, I mean the boy has the twang in his soul
9:32 AM

Let’s see. Um, first of all, I am honored to have even been nominated and it’s been my life’s dream to be – ah, there’s no award? Okay. Well, let me just howdy to all my War College Anon Family.

Anon 10:29 – Yep. In a moment of weakness, Jack Billion allowed me to consult his campaign. But honestly, I dropped in on Giebink’s press conference to get some free pizza. It’s what I share with Kloucek, a passion for free food.

Anon 10:52 – Yes, I got smoked in a primary in District 15. That was in 2002 when my bloated sense of self-importance got away from me. I was too busy working on Rick Weiland’s primary campaign to do any door-to-door. However, Mom and Dad did a quick lit drop and I posted a few home-made signs and got what I deserved. A good whacking. Fortunately, I was spared the indignity of having to be nice and sit through hundreds of hours of listening to people yammer on and on about railroad taxes and morality issues in Pierre. My bud and fellow political junkie Lee Schoenbeck went there in my place, and, alas, he too will return to normal life. What’s the worst that could happen? You get elected. Welcome back to the real world, Lee.

Anon 8:04 – Idaho? Utah? I dunno. What about South Dakota? How about Tierra Del Fuego?

Anon 9:28 – I’ve seriously thought of monkey ranching at Scenic, home of the world famous Scenic Bar. A great place to take a date. You can get your Wild Turkey/Seven served in a Dixie cup and spit snoose on the floor.

Pat, thanks for the pic. Next time use my more photogenic side. My wife likes the new penitentiary hair cut. Might signal a new career option. See y'all at the recounts!