By PP - November 01, 2006
I got this in the e-mail today where the National Taxpayer's Union weighs in on South Dakota's ballot measures: 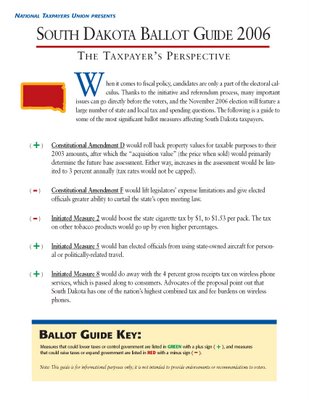 What did they have to say about it?

While this is not a comprehensive list of all initiatives, it should provide you with some insight on the key taxpayer issues this election season. This guide is for informational purposes only; it is not intended to provide endorsements or recommendations to voters.

If you would like a handy, printable version of the South Dakota ballot guide, please go to: http://ntu.org/Ballot_Guides/2006-10-20_Ballot-SD.pdf

( + ) Constitutional Amendment D would roll back property values for taxable purposes to their 2003 amounts, after which the "acquisition value" (the price when sold) would primarily determine the future base assessment. Either way, increases in the assessment would be limited to 3 percent annually (tax rates would not be capped).

( – ) Initiated Measure 2 would boost the state cigarette tax by $1, to $1.53 per pack. The tax on other tobacco products would go up by even higher percentages.

( + ) Initiated Measure 8 would do away with the 4 percent gross receipts tax on wireless phone services, which is passed along to consumers. Advocates of the proposal point out that South Dakota has one of the nation's highest combined tax and fee burdens on wireless phones.

You can read our national 2006 General Election Ballot Guide by clicking on: http://ntu.org/Ballot_Guides/2006-10-20_Ballot-US.pdf

You can sign up for NTU's Taxpayer Action Center here.

Anonymous said…
These idiots don't have a clue what they are talking about. Amendment F does not lift expense limitations for legislators, it only gets rid of the ridiculous 5 cent/mile mileage payment. Legislators get reimbursed state rates already. It also makes it much more difficult to close a meeting and clarifies that no vote can be taken while in closed session.
NTU needs to do a little more research before they print this stuff.
5:35 PM