Tom Katus and his attack ad 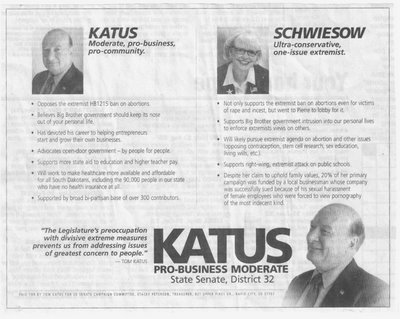 I promised this a couple of days ago after seeing the hatchet job that Tom Katus did on Elli Schwiesow in his ad. And the really sad thing is that Tom seems like he could be a nice guy if Stan wasn't telling him how to run his campaign.

If you recall, this type of tactic didn't do Stan any good either. It just seems to come cross as Stan's bitterness rather than Tom's leadership.

But then again. If Tom had leadership skills, he would not have been so willing to step aside for Stan after the primary.

I've got an ad that "I'd do" if I were in charge of the world... but it would probably be a little too much over the top for this race. If I can get blogger photos to behave tonight, I might have to post it. It deals with a puppetry theme and being happy to let Stan run his race...

But like I said, it would probably be a little too much over the top.

Anonymous said…
What a hypocrite! Talk about divisive and extreme! How could this ad possibly win undecided voters?
8:59 PM

Anonymous said…
bitterness and anger does not appeal to voters. This type of ad will backfire.
9:02 PM

Anonymous said…
I have never heard of the "pro-business moderate" party. Apparently that is the party Katus belongs to - he doesn't say "Democrat" anywhere in the ad.

BTW, who is the "local businessman" who supported 20% of Elli's campaign? And is Tom's claim true about the sexual harrassment?
9:42 PM

Anonymous said…
I assume all you people will be equally offended by Dick kelly's attack ad on tv.
11:13 PM

Anonymous said…
Kelly has an ad?

is about how much Heidepriem has driven up our insurance rates with his rampent lawsuits and suing everyone he meets???
11:35 PM

Anonymous said…
Everything in the ad is true. Great ad. Campaigns are about highlighting differences.

Just look at Ellie's sample ballot that she advertises and PP prints. She wants to destroy our property tax system (Amendment D), raise taxes, take away constitutional rights, and take away people's rights to spend their money as they wish (video lottery).

Ellie's a fascist. She's for government total control.
1:54 AM

chuck said…
Gasp! Ellie not only supports the ban but went to pierre to lobby for it.WoW! What an extremist. What BS.
Supports big brother intrusion..blah blah blah. I want to use words like rhetoric, extremist, repressive and more, but they are so tiresome and dull. The left is too extreme, the right is too extreme. This side taxes us to death, the other side taxes us too. The only difference in politicians anymore is morals. Their stands on social issues defines them. This ad will impress no one other than the left wingers who wish to see attacks on Ellie.
5:55 PM

Anonymous said…
If this ad doesn't solidify Ellie's lead, what will? Thanks for the contribution to her campaign Tom. So when is the Katua working for Daschle ad/picture coming out? Or won't Stanford let you run it without him in the picture as well. Ha!
And to think on election night after you get whopped Tom,...Ellie will probably say something nice about you!
10:10 PM