By PP - November 03, 2006
I was taking a little grief over at Mt. Blogmore over a post I did about Stan Adelstein sending money to "the Majority Project." It was claimed that I misidentified this group which has been supported by Tom Daschle to attack Senate Republicans on a National basis as receiving the funds.

A few people pointed out that I was wrong. Stan didn't send the money to the national group.

And now that I see the latest filings, I agree. I was in error. Mea culpa. Mea culpa.

Because here's the group of people that Republican Senator Stan Adelstein is trafficking with (click any of the images to enlarge them): 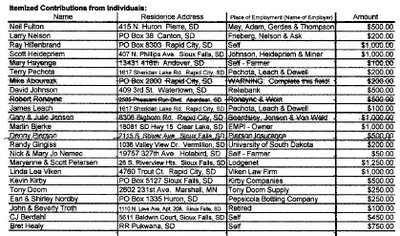 Now, I don't have anything personal against any of the people on the list (a few are even readers - and specifically, a shout out to Nick Nemec). But my point was originally that as a Republican legislator, Stan was openly funding attacks against the GOP. And from a list of who got money from this organization, I'd say that my original point remains essentially true. Stan is funding people who would prefer that the GOP not be in office:

And looking at the better than $10k in salaries, it looks like he might be providing a majority stake in a group directly affiliated with the SDDP.

What does it mean? Nothing earthshaking for those of us who have been watching this unfold over the past few years.

But Rapid City Republican party members should just keep this in mind when he runs as a Republican again two years from now.

And Stan should be forewarned as well. Elephants never forget.
Adelstein

Anonymous said…
Don't let the blogmore people get you down. It is well known that the people there are liberals and the topics on the blog are driven by their lefty friends like Democracy in Action and the running mate of the Dem candidate for gov. I am glad that you have this blog but I wish you would quit providing exposure to Dems and other liberals. That is far more than other partisan blogs do. I think it is about time you do your Rapid City Journal expose.
1:59 PM

Anonymous said…
I think Stan is doing exactly what's right for the Republican party. They need a shake up. The party should not be led by the likes of Rhoden and Schoenbeck - too extreme, too conservative, too out of touch.

I've been thinking alot lately how crowded the ballots are getting, and I was near the conclusion that we should really do something about the initiative and referral process.

Then again, when you have a majority of out-of-touch uuber extremists, this state can't afford to relax those laws.

You have to continue to refer their bad laws, or initiatie the ones they don't have the courage to talk about.

On that note, PP - hows about you and I start a initiative process to pass meaningful campaign finance reform. The Rs won't get it done as long as its a D idea, so the only option left is for us to make revisions.

Anonymous said…
anything you can do to explain how much "Blogmore" sucks would be great....it's not much more than an angry liberal circle jerk now
2:47 PM

The apple doesn't fall far from the tree.

Some of these folks used to be Republicans until the party didn't like their moderate views.
3:55 PM

Anonymous said…
A PAC spending nearly half it's money on salaries? Do the donors know where there money goes? And why would they get $1,000 from the Turbak PAC and give $1,000 to the Turbak campaign? It makes no sense!
10:37 PM

cp said…
You seem to be so sure that the current leadership of the GOP is really the true GOP. Stan and the majority of Republicans don't buy this. Until the GOP kicks out its crybabies and returns to leadership that actually wants to solve things instead of carping about the state of the world, the bleeding will continue.

It isn't like these Dems Stan has helped are pinko commies. Give me a break--this is South Dakota. The reason Stan is giving to them is because the GOP is not delivering solutions at this time, just the partisan blather we've all come to expect.

Stan wants to plant seeds for a better politics in the state in general by discrediting those that have strayed so far from good sense. The GOP leadership is scared--which is why their attacks on Stan are so shrill.