Another ad taking Heidepreim to task - "Get back to work - who will he work with?)

By PP - November 01, 2006
This Radio ad just hit the airwaves in Sioux Falls in the Heidepreim/Kelly race:

Get back to work - who will he work with.

Click on the above link to listen to the ad which questions "who Scott will work with after turning his back on the GOP and attacking Rounds and Thune."

The reply from the Heidepriem camp? I don't have it yet, but I'm told there's a radio ad airing in the Sioux Falls Market in opposition to the ads noting that "it's time to stop fighting and to get back to work."

There's also this mailer from Heidepriem. Click on the images to enlarge them: 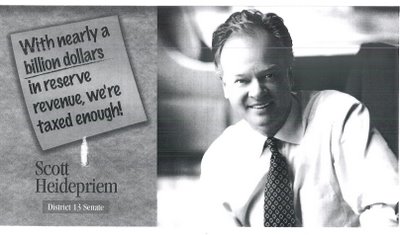 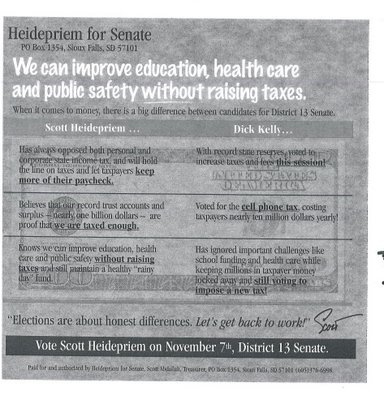 It looks from here that he's going after Kelly for the cell phone tax... Aaaand that's about it.

Anonymous said…
I am not sure if SouthDakotaMac endorsed him, but I would find out here...http://southdakotamac.blogspot.com/
6:19 PM

Anonymous said…
I CAN'T BELIEVE HEIDEPRIEM IS ATTACKING KELLY FOR NOT CUTTING TAXES...what does he think he is, some kind of Republican??? He's being phony and trying to confuse voters into thinking he's the Republican in the race. See that he doesn't say in the mailer that he's a "Democrat." I wouldn't either. More slippery trial lawyer tricks!!!
6:23 PM

Anonymous said…
this mailer by Heidepriem started arriving at houses this week so he was planning to ATTACK Kelly all along. Funny, that doesn't sound like "getting back to work" -- it sounds like the Hildebrand playbook of smear and attack....just another liberal phony
6:25 PM

Anonymous said…
ouch, that's a good ad. all i can say is that i assumed Heidepriem would win this race but if he's having trouble winning this race his high hopes of being Governor are over....please, Democrats, can we start over with a better prospect?
6:28 PM

Publisher said…
Correct me if i'm wrong here, but didn't Scotty make a tear-filled speach about how he had to leave the legistature to spend more time with his son back when he lived in and repesented Miller. Next thing you know, he moves to Sioux Falls, spends time as the Republican AND Democratic talking head on the Hemmingsen show, and now he's running for office again! What does his son think of this?
6:45 PM

That son is now in college. He left Miller many years ago. But good effort to drag a man's kids into the race. You are obviously a classy guy.
8:02 PM

Anonymous said…
Our problem is just what anon 6:23 pointed out. Heidepriem IS a Republican but he is moderate. Therefore, in SD, he must be a Dem. I am worried that we have alienated the moderates to such an extent that they now are POed enough to vote Dem.
9:25 PM

Anonymous said…
so when he was pretending to be a conservative on KELO-Land's "First Monday" all those years what was he really???

Anonymous said…
Heidepriem has the John Kerry problem. he's so ambitious and full of himself and wants to be governor so bad that he'll be anything...he has no *real* self...it's just all phony bs and posturing designed to advance his longing to be governor or senator...there's no soul there
10:06 PM

Kelly's TV ad is six or seven hits in a row (most of them falsehoods!) and Dick appears nowhere in the ad....and why the hell would he? He doesn't want to look like a desparate hatchet man.

It is interesting Kelly voted for an extra tax on cellphones.

I hope he takes down that billboard with his watchdog.
10:09 PM

Anonymous said…
the Democrats will complain about ANYTHING...if the Republicans in Pierre raided the trust funds like Heidepreim wants to do they would be attacked for being fiscally irresponsible...all they do is bash and complain and attack. That Heideprim is attacking Kelly and Rounds for keeping the budget safe and balanced and then suing the state for billions it doesn't have is the height of hypocrisy
11:03 PM

Anonymous said…
this fancy mail piece attacking Dick Kelly by Hydrosperm makes it clear he was planning to savage Kelly for a long time... what about "nice politics" and "getting back to work"??? ya, right. this is right from Hildebrand, who is advising Hydro
12:19 AM

Anonymous said…
If I roll my sleaves up, does that mean I'm getting back to work? We are all sheep...don't forget that.
6:51 AM

Anonymous said…
I heard an ad by Heidepriem in response to Kelly's ad. Heidepriem cries foul & alleges that Kelly is running a negative campaign (in response to a different ad that points out how Heidepriem voted while he was formerly in office). But look at the bottom of Heidepriem's ad. He says elections are about honest differences. If he can point out votes that Kelly has made, why can't Kelly point out votes Heidepriem has made? Scott just couldn't wait to play the "victim card." And to think, he's the one who struck the first blow with these mailers.
6:52 AM

Anonymous said…
Hidnepreiem ATTACKED Kelly FIRST and then runs an ad whining about being a victim of attacks!?!? this is classic move from Daschle/Hildebrand, Hidnepriem's best buddies...
7:20 AM

Anonymous said…
how many people did Hidneperm sue to get the money for all his ads?
7:29 AM

Anonymous said…
Heidiprem is captain of the wine-sniffing team at Minnehaha Country Club and has his Country Club slippers monographed "Su-Lots."

I can't wait for the film of him wearing a red flannel shirt walking though corn with "the people"!!
8:09 AM

Anonymous said…
after Heidpeim attacked Kelly and then claimed he was a victim, the most predictable thing to happen will be a Dave Kranz column praising Heideperm and attacking Kelly...Kranz and Heiderpirm are big buddies ... as day follows night, folks, you heard it here first!
8:13 AM

Anonymous said…
sheesh, if this is what Heidepriem is in for then he's got a tough road ahead.

I think this is what the Mafia calls a "message job."