Citizens for Honest and Open government are being secretive once again. And the money trail starts to warm up

By PP - October 31, 2006
In their filing today, Dwight Hale, who has been running from the press like a scalded dog on behalf of South Dakotans for Honest and Open Government, finally had to cough up with a report as to who is backing his campaign which produced two ultra-negative commercials against Rounds on the gubernatorial race.

The source for the funding for South Dakotans for Honest and Open Government?

It's another PAC. Imagine that. Sounds like other money shuffles I've reported on.

This political action committee playing candyman to Dwight's group is called Vision South Dakota. And it's registered to a James Endres of Watertown. This appears to the be the same James Endres who was a democratic legislative leader in the late 1970’s.

Of $26,200 that was put into the campaign, Hale put in $100, and Endres’ group put in $26,100 of the cash. Where did all that money go? According to the political action committee report, all of the money went to Gunn Productions out of the Sioux Falls area. 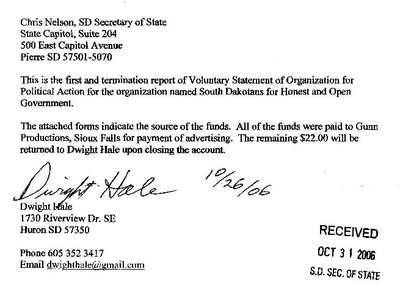 (Click to enlarge any of the pictures)
Who are they? Oddly enough for a company producing attack ads against a Republican, I found a link to their website on the Lifelight Christian music festival sponsor page. And it gets better.

According to the website, Gunn Productions is owned and operated by Tim Mikkels. And they’ve done commercials for Bill Janklow for Congress, the SD Highway Patrol’s Safer Highway program, the jingle for the South Dakota State Fair, and also work for Dakota Magic Casino.

And by coincidence, his company is also seemingly handling hard hitting negative ads against Governor Rounds...

Tim Mikkels proudly displays under his page of talent that he's worked with a picture of him with Governor Rounds with the caption - TALENTS WE HAVE WORKED WITH - Governor Mike Rounds, Tim, and their better halves. So, he seems to intimate he's glad to work with him, but attacks him at the same time.

If you look at the clients he lists on his website, they aren’t claiming the Citizens for Honest and Open Government attack ads.

Who else is involved? We should know in another day or so. Vision South Dakota has yet to officially file their PAC report because it lacks information. But I'm told it's in the Secretary of State's office and as soon as the information is clarified, it's going to be posted. The jury is still out on whether this will finally identify who is behind the attack ads, or if it's going to lead us on another game of round robin trying to track funds from one political action committee to another.

The PAC money shuffle. Hiding from the press. Unidentified people hiding behind the scenes. Once again, the Citizens for Honest and Open Government show they are neither.

Anonymous said…
Hey, business is business. Just ask fence-sitter Don Frankenfeld, who has been hired by the liberals of Democracy in Action and others. He always finds a way on Blogmore to talk about something he's done (correction, tried to do)back in the day. Frankenfeld is almost as big a self-promoter as the running mate of the Democrat candidate for governor. Which I guess could mean that he is not hiding his business dealings like the guy in your post.
6:54 PM

Anonymous said…
Kind of like the Gov Club Fund which according to you is somehow cryptically posted on the Sec of State website.

When you piece this one together, please do the same with the Gov Club. Thanks
7:08 PM

PP said…
The Gov club isn't cryptic, you just have to know where to look and what to look for.

Anonymous said…
only in america, would we accept a free home for our governor to live in....and then bitch that he lives in it. will the dems bitch when, sooner or later, their guy or gal lives there?

maybe wannabe heidepreim will offer to convert it to a women's shelter, or a food pantry? he has Minnehaha Country Club, he doesnt need this mansion.

Anonymous said…
1) The old mansion was falling apart. Either we were going to replace it or refuse to give the Governor a house at all.

3) I have heard rumors that the "brains" behind these attack ads is Curt Johnson. Interestingly, Curt is also the treasurer of the "Billion for Governor" campaign. How do you like that for "honest and open"?
8:01 PM

Anonymous said…
PP-- I have a prediction. Besides the death penalty, another big topic during next session is going to be campaign finance.

People are getting tired of the money laundering and you cannot hardly blame them. This is really a bunch of crap.
8:18 PM

Anonymous said…
Anon 8:01 is right. I know for a fact that it is common for political parties in other states to use marketing tools such as Governor's Club for fundraising. Everybody who contributed is listed. It's just that the contributions are not categorized as to which fund-raising tool brought the money in. I don't see what difference it makes as long as people are listed as contributors. The Dems are blowing smoke on this one.
8:27 PM

Anonymous said…
The same James Endres who has a son that has nearly become a billionaire at the Aurora ethonal plant, thanks to the ethanol subsidies Gov. Rounds has pushed for.
8:37 PM

Anonymous said…
Don was already rich before he built that plant, but he's been a big Dem all along. I USED to actually like Jim. That picture with the wives was taken at Rounds' Inaugural Ball. That's Daugaard's late father dancing in the background, and having a "ball".
8:49 PM

Anonymous said…
Hey, the cartoon commercial reminds me of that silly commercial Mark Barnett ran "spanning the globe looking for Kirby's jobs" or whatever.
Um, that one didn't work, either.
9:50 PM

Anonymous said…
The ads are good. They are technically correct. Point out one FACT that is wrong and not substantiated.

Remember the media to maintain their credibility REQUIRE ALL negative ads PROVE their facts are correct before they run them.

Maybe SD should wake up and pay attention tot he real Governor Rounds. He is sneaky like that pheasant in the ad.
10:19 PM

Anonymous said…
Here is one fact that is not correct: Gov. Rounds is often not flying at taxpayer expense, becuase he entirely reimburses the state for any trips on which any non-state business is done.

Secondly, it is not true that over half of state contracts go to out of state companies - either as number of contracts or as total value.
5:22 PM

buck30 said…
Should Hale even be involved in this organization? He is a federal employee
http://efotg.nrcs.usda.gov/references/public/SD/EngTecNoteSD-2003-3CathodicProtection.pdf
1:48 PM

buck30 said…
More on Dwight Hale, this link http://www.osc.gov/ha_fed.htm#may
says what a fed employee may and may not do. on the do not list is
"solicit or receive political contributions (may be done in certain limited situations by federal labor or other employee organizations)"
2:09 PM