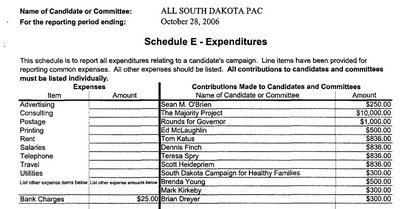 (Click on image to enlarge)
Another Stan Adelstein political action committee filed the other day. While this one sends out money in a bit more bi-partisan fashion, check out the BIG donation it makes.

Several Democratic Legislative candidates got checks inthe amount of $836 including Katus, Finch, Spry, Heidepreim, etc. And I'll be the first to point out that he sent a check to Kirkeby, McLaughlin, and $1000 to Governor Rounds. I won't cast dispersions on those donations, because any of those sound reasonable, even if they still get around donation limits.

It's not like the $5000 checks he sent out to Dems from his other PAC.

The thing that has my attention in this filing is the BIG $10,000 check to the Majority Project.

What is the Majority Project? Two words you need to know - "Tom" and "Daschle."

According to the center for Media and Democracy:

The Project, which launched officially on March 2, 2006 [3], is a political action committee formed with the backing of former Senate Leader Tom Daschle (D-South Dakota), who lost his bid for re-election in 2002. [4]

The aim of the new "political advocacy group" is to "[create] a clearinghouse of opposition-research information against all Senate Republicans." Daschle "and other Democrats" plan "to collect and disseminate political information critical of all GOP senators, not just the handful of vulnerable incumbents whom Democrats have targeted this year. The project is the first concerted attempt by Democrats to create a permanent opposition-research arm focusing on all Republicans." [6]

Read it all here. A big $10,000 check from Stan to help fund "a permanent opposition-research arm focusing on all Republicans." THAT'S going to help Stan win friends and influence people in the Republican Party for when he makes his next attempt in 2 years.

I've already been told that Republicans may not let him caucus with them at the special session. But when he's funding a permanent opposition-research arm focusing on all Republicans, can you really blame them?
Adelstein

Anonymous said…
Not surprised he sent money to O'Brien, his judgeship opponent is pro-life. I assume this research fund is digging up dirt on US senate GOP, not state senate members. If I were in the SD Senate, I would vote to NOT let Stan caucus with me. The man is poison.
8:28 PM

PP said…
If it's a different majority project, I'd like someone to point it out.

Anonymous said…
For someone who looks like Santa Claus he sure isn't very jolly
8:58 PM

PP said…
Chad, if I'm wrong, please enlighten me. I'm only going off of what I'm reading.

I haven't seen anything to lead me to believe differently.
11:34 PM