My 1600th post! No on 7 files their campaign finance report. And they're sure not short on finance, or information.

By PP - October 29, 2006
With campaign funds (and expenditures) in excess of $700,000, the NO-on-7 campaign effort is showing that they're one of the big dogs in the ballot initiatives this year.

You can read the campaign finance report here on the Secretary of State's website. But in the meantime, check out some of these donations: 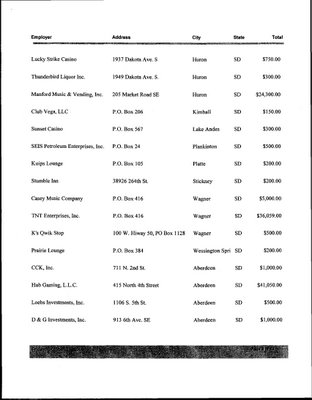 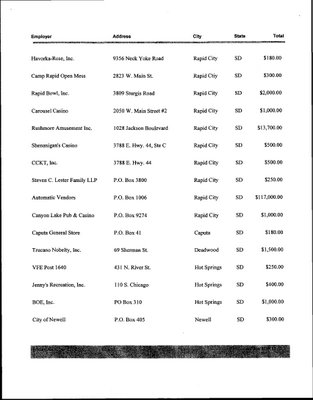 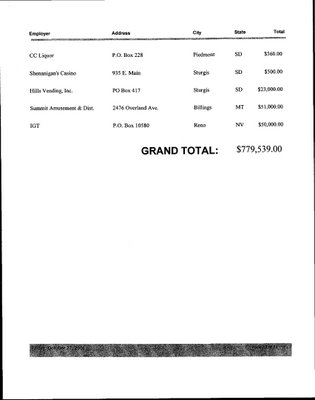 The thing is, these are businesses which have seen their livelihood assaulted year after year. From some of these amounts I'm seeing, apparently they seem to be getting sick of it.

Is there going to be finger pointing by the other side talking about some of these large amounts? Sure. But there are a lot more mom& pop convenience store operations who are kicking in $500 to $1000, because having a machine in their store is what's helping to keep them afloat.

Before people start casting stones at No-on-7, I think they ought to first ask who is behind the Yes-on-7 effort. Because at this point, there's been lots of money spent on ads, many of them negative. And we still don't know who is funding them. It's as secretive as can be.

If Yes-on-7 wants people to consider their point of view as valid, the rest of the organization and the people who fund it need to come out from behind their front man.

Am I involved with either organization? Nope.

In fact, some of my close friends (my wife included) think I should be against video lottery because my family was a victim of a thieving employee who stole money and plunked it in to the machines. Video lottery didn't make this employee steal money from my dad (at one point doing so while my mom was on her deathbed) - it was a conscious decision on the employee's part. *

After three previous votes on the subject, South Dakotans have affirmed time and again that they want video lottery. It's businesses contribute to South Dakota's economy. It's a legal activity, for crying out loud. No one is holding a gun to people's heads forcing them to play.

So, remove that revenue, and the voluntary entertainment tax will likely be replaced by an income tax. That's in addition to all the jobs that will be lost - both factors likely creating a downturn in the economy.

I voted No on initiated measure 7 for just those reasons. Besides. After three statewide votes, some people should get the hint.

*If you're wondering, I personally combed through ten years worth of financial records to help send the thieving employee to jail. (I did use to be an investigator for the state, you know).

Anonymous said…
Good for you PP.... I voted NO too!

If the vote yes on 7 people think they are doing something great for society then why are you hiding?????
8:56 PM

Anonymous said…
FYI - It would actually take a 1 cent increase in the sales tax to replace video lottery. VL produces $115M a year - about what a penny on the sales tax would produce.

I'm not advocating one way or the other, but that would be one sensible way to deal with the loss of revenue.
9:45 PM

Anonymous said…
PP
Are you talking about the negative ad that shows South Dakota kids watching Mom and Dad volunteering to pay taxes rather than purchase basic necessities? I would agree with you. Once these kids leave the womb they are on their own.
9:46 PM

Anonymous said…
is the last entry on the first page the city of newell ?

Anonymous said…
Yes on 7! Feed your kids first! There are no taxpayers in Newell, just sheep.
12:25 AM

Anonymous said…
I think PP was referring to the attack ads against Chris Nelson for doing his job.
8:22 AM

Anonymous said…
9:45,
A one cent sales tax increase is the equivalent of a 25% increase in taxes for every person in this state.
I know there are many businesses in this state (casinos) and bars/restaurants that rely on lottery revenues. The business owner gets more than the state from lottery profits and you take that away, that is a huge loss to our businesses so indirectly, the state would lose more than 112 million. If we ban video lottery, then we should ban Deadwood, scratch games, Indian gaming, and Powerball as well.
I don't gamble much and I don't have a video lottery business but I think people need to take responsibility for themselves and their families.
9:06 AM

Anonymous said…
I'm sure 7 is a tough one for the "religious right" as it will hit us all where it counts (wallet) if it passes. Let's vote NO on everything and have faith in personal freedom and responsibility.
11:43 AM