By PP - November 02, 2006
Guess what I found. Not only did Vision South Dakota fudge their financial report on how much they donated to South Dakotand for Honest and Open Government.

Jack Billion's filing is in. And oddly enough, the amount of money he's reporting receiving from Vision South Dakota doesn't match what they're saying he got.

First, here's what Vision SD said they gave to Billion (Click on any of the images to enlarge): 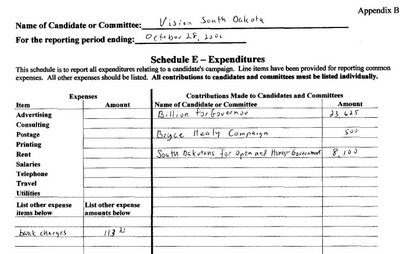 Vision South Dakota says that they gave Billion $23,625. Sound ok? Not after you look at Billion's report (Last page):

Jack Billion says that he got $45,625 from Vision South Dakota. Which indicates a discrepancy of $22,000 between the two reports!

So, which entity is correct? Vision South Dakota which has already shown it's purpose is for moving money between PAC's, or the Democratic Candidate? On one occasion of a problem, I might chalk it up to a clerical error. But tw0? Something is fishy here. Very, very fishy.

More questions yet to answer.

Anonymous said…
first off you are so busy focusing on Vision, you missed Hunt setting up a dummy corp to funnel $750K to Vote yes for Back Alley Abortions.

Anonymous said…
Talk about discrepancies, how about the bs fat boy Roger Hunt is trying to pull on the yes on 6 group. 750k from a newly formed corporation, does he think that will fly?
9:51 PM

Anonymous said…
Apparently sine Billion and Endres aren't as fat as Hunt and aren't Republicans this doesn't matter!
8:01 AM