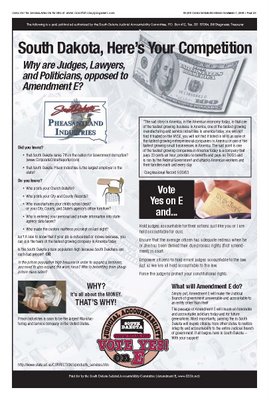 (Click to enlarge the bad advertising)
You know, it's pretty bad when, at the same time they're arguing in court that their campaign opponents are being untruthful, the fun anti-tax 911 conspiracy crew at sdja.net place an ad in the shopper paper which is full of some of the wildest claims you've ever seen.

Are they on drugs? SD Prison industries is the largest employer in the state? As Tim Gebhart points out on his take on all of this over at A Progressive on the Prairie:

The second faulty argument lost by the judicial accountability JAIL crew. In one day.
JAIL

Anonymous said…
I love that they put a 100 dollar bill in the ad when most of the JAIL crazies believe that paper currency is worthless . . .
7:25 PM

Bill Stegmeier said…
Ok, you caught me! Sorry about misstating the size of the prison industry work force. It should have said "one of South Dakota's largest employers." Had to meet that darn deadline, you know. Our corrected ad is in the Rapid City Quik Quarter and the Aberdeen whats-cha-ma-call-it. (Published by Midland Press) But hey! Even if our statement that SD prison industries is "the largest employer in the state" was an intentional fabrication, so what? It's now OK to lie about a ballot issue. Judge Max Gors just made it official! Yee-Ha!

Bill Stegmeier said…
Zee South Dakota War College states: "You know, it's pretty bad when, at the same time they're arguing in court that their campaign opponents are being untruthful..."

Well, are Amendment E's campaign opponents being "untruthful" when their ads say "Amendment E could make jury duty a crime!"? Can anyone at the learned SD War College substantiate that claim?

How 'bout Amendment E's opposition's claim that under Amendment E, "Violent criminals could be set free..." Any validity to that one? Is it in the Amendment?

Please, so I can abandon my ill-advised quest for judicial accountability, show me where in Amendment E the language allows the aforementioned opposition's claims. You show me, and I'll pack it in, kiss your butts, and never again show my face in SD politics. Deal?

Anonymous said…
Bill appears to be right that it is common practice to lie about a ballot issue. Best advice...vote NO on all ballot issues as we are being lied to by the YES folks. Let's vote for individual personal responsibility.
9:29 PM

Anonymous said…
Bill,
Based on your ad I assume that you also support the marijuana bill...'cause you were obviously smokin' it when you developed this ad.
WOW!!!!
9:58 PM

Anonymous said…
E...it must stand for extreme goofiness.
7:39 AM

Judge: An attorney who wears a robe, has inordinate unchecked power over others, considers himself elite, and has given himself immunity for even "corrupt or malicious acts"*. An ordinary
human being subject to the same foibles and inadequacies as his
fellow man, such as misunderstanding, bias, preferential considerations,
discriminatory considerations, greed, malice, and retribution. A member of the only sector of society not accountable to any effective third party oversight.


Pig with lipstick: A pig.

Amendment E: South Dakota legislation designed to hold judges accountable
for judicial misconduct as stated in section 2 of the Amendment: "any deliberate violation of law, fraud or conspiracy, intentional violation of due process of law, deliberate disregard of material facts, judicial acts without
jurisdiction, blocking of a lawful conclusion of a case, or any
deliberate violation of the Constitutions of South Dakota or
the United States, notwithstanding Common Law, or any
other contrary statute."
9:29 AM

Anonymous said…
MHS, the only thing that the JAIL crazies have right is that paper currency is worthless. Go read the Constitution of this nation, especially the section dealing with who has the power to coin and print money, and the fact they should be based on equal weights of precious metals (ie gold or silver), then take a hard look at our system. We have a socialist, private central bank called the FED, that prints money, and your taxes you pay every april go to the FED, not the govt. FDR set the country on a dangerous path, and the very banking system at the center in unconstituional. Why has nobody said anything, well, what do you think would happen to not only this country, but the world econmic system. Sorry, I know it is off topic, but had to vent, that issue bothers me.